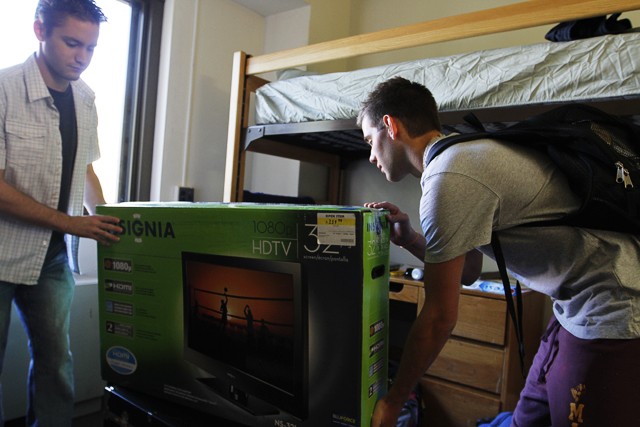 Students living in University of Minnesota residence halls now have access to cable in their dorm rooms at no additional cost. Instead, the monthly rates of around $8 will be included in the cost of rooms, making cable television more accessible to students.
In 2000, the University made an agreement with Comcast to wire student housing. However, after wiring all of the residence halls, an agreement for lower rates could not be reached.
“The rates were the same as they were for any other Minneapolis residence, and we were looking for a bulk rate,” Mannix Clark, Associate Department Director of Central Housing said.
The agreement with Comcast expired this year, prompting the University to explore other options. The University found a less expensive alternative in Campus TeleVideo, another local cable provider, through which the University was able to work out a bulk rate.
“We thought it was a pretty good deal,” Clark said. “Our rates are low compared to other schools in the Big Ten.”
Students do not need to register for the service, but in residence halls the fee is not optional.
Tarah Sondeland, a first-year student in Centennial Hall, was enthusiastic about the switch.
“I didn’t think it would be included,” Sondeland said. “I thought I’d have to pay for it separately, and I heard it was really expensive. I’m happy that I won’t have that extra bill.”
A comparable package through Comcast for a regular customer starts at $14.17 per month. That package includes around 40 channels and local news stations.
Katie Brokaw, a senior living in Middlebrook Hall, was happy about the inclusion of cable and relieved to shed an unwanted bill. During her sophomore year, Brokaw lived in Centennial Hall, and paid for basic cable.
“It was $15-20 each month, and I didn’t have a roommate to split it with,” Brokaw said. “[The new cable plan] will save me some money. I would have just ordered the same basic package again otherwise.”
Brokaw said she watches local news channels in the mornings, before class and evenings.
“Local channels and news keep me connected, and without that, there’s a huge gap,” she said. “A lot of my neighbors who didn’t have cable didn’t feel connected.”
While the bulk rates are a positive change this year, some questioned the delay.
“We try to be innovative, but we aren’t centrally funded and need to remain competitive,” Clark said. “Other schools offered this service before us, but we’re ahead of them in other areas that we felt were a higher priority.” Clark cited the University’s addition of fire safety sprinklers in 1998 as an example of a more important dorm amenity.
Clark added that potential upcoming advancements would be more progressive, mentioning the possibility of adding Internet Protocol Television — television services delivered via the Internet that are often bundled with video-on-demand and VoIP.
“We’re going to add more cutting edge stuff in the future,” Clark said.