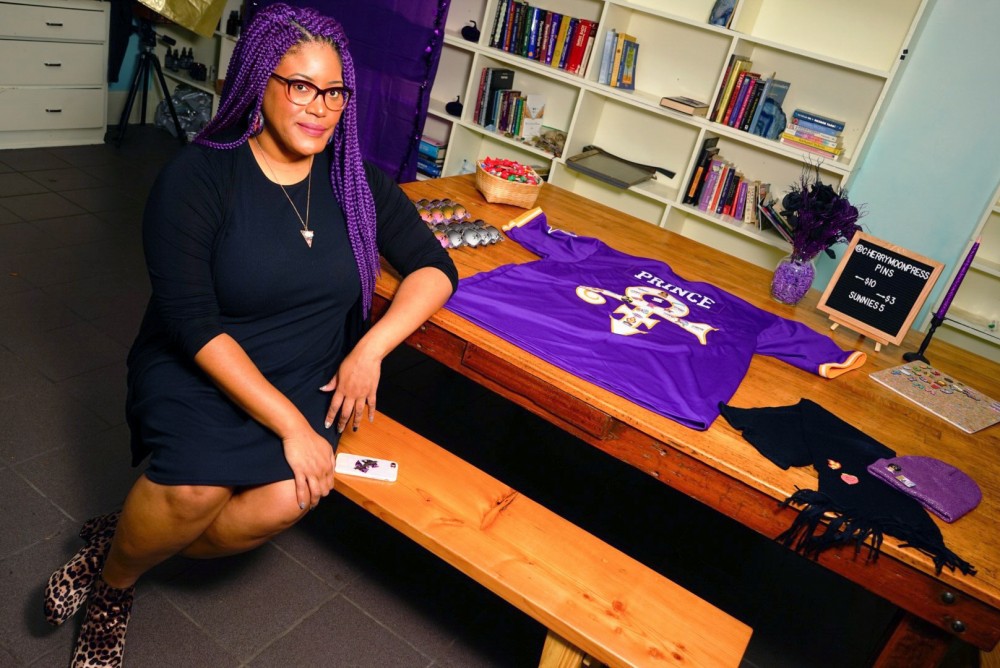 Gigi Berry poses for a portrait while selling her pins under her company Cherry Moon Press.

One year ago this Wednesday, Gigi Berry officially made her hobby an “actual thing.”

The hobby? Pin collecting. The actual thing that came out of it? Cherry Moon Press — a local Prince-themed enamel pin company.

You know the saying … it would be like asking her to pick a favorite kid.

As for the reign she’s proudest of, pin queen it is. From Girl Scout sash pins to Best Buy uniform lapel decor, she’s been up for the crown for a long time.

Darin Kamnetz, a local photographer and friend of Berry’s, isn’t sure how it all happened either.

“[Berry] was always a fan of pins and Prince, but it wasn’t like she talked about [starting a business] all the time. She just did it.” Kamnetz said. “I wouldn’t know where to start.”

Over time, Berry has gotten Kamnetz hooked on pins as well. According to Berry’s friend Natalia Toledo Creus — a graphic designer and frequent pin collaborator— she’s probably gotten many others collecting, too.

“[Berry’s] a very loving person – I think that’s why she sort of became an internet personality,” Toledo Creus said. “And she takes advantage of that in the best way possible.”

Electric Fetus buyer Kim Baldwin has been prepping for the event, as well as the official Record Store Day celebration Saturday. This year’s Record Store Day falls during Prince’s Celebration week — it’s a double whammy for the Fetus and Berry.

“[Berry] has a lot of people that buy her pins from all over the world,” Baldwin said. “And a lot of them are coming this week for the Prince celebration.”

But those special release pins? You’ll have to be there today to see them.

What we do know is that there will be three new designs: a commissioned piece, an homage to this year’s Warner Brothers’ Record Store Day “1999” record release and a … you’ll have to wait and see. But it may have something to do with Paisley Park.