The Gophers have beaten their first five opponents by a total score of 62-19. 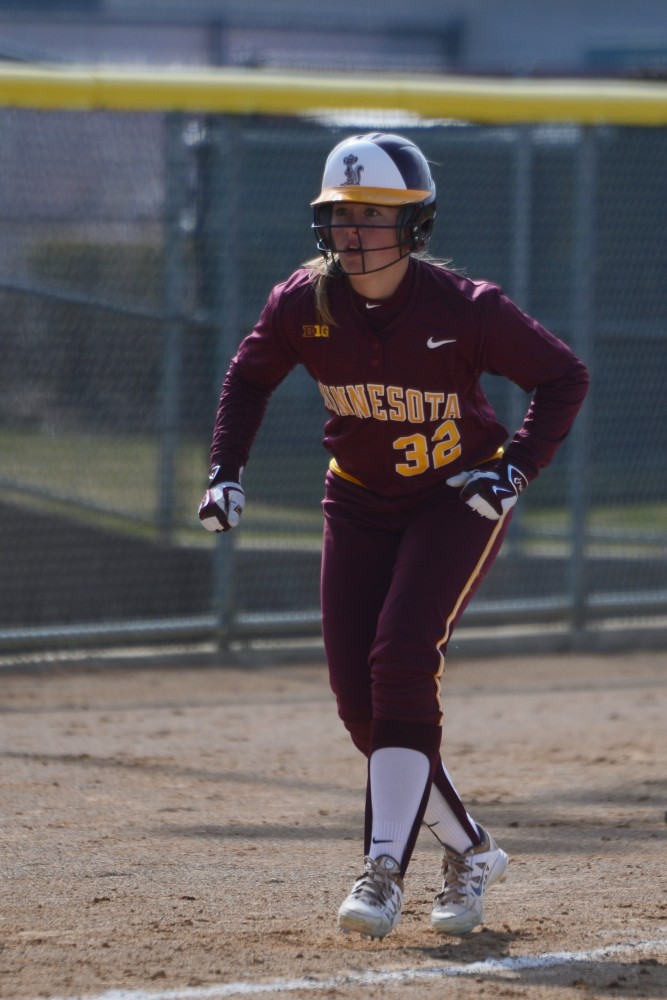 Sydney Dwyer edges off third base during the Gophers' home opener double-header against Illinois at Jane Sage Cowles Stadium on April 9, 2016.

The beginning of the season is typically a time to shake off the rust and learn what type of team you have, but don’t tell a Minnesota softball team that.

The No. 14 Gophers won all four games of the Big Ten/ACC Challenge this weekend in Raleigh, North Carolina to extend their season-opening win streak to nine games — a program record.

“It was a great weekend of softball,” said head coach Jessica Allister. “I thought as a team we played well … I’m impressed that different parts of our game were firing at different times.”

Senior pitcher Sara Groenewegen started the weekend off strong for Minnesota and struck out eight of the first nine batters she faced Friday night against Notre Dame.

She threw the full seven innings and finished with 15 strikeouts, giving up just three hits to help the Gophers to a 4-1 victory.

Saturday morning brought on a rematch with the Fighting Irish, and this one proved to be tougher, with the Gophers falling behind by two runs early.

They clawed their way back in the bottom of the fourth, however, thanks to a solo homerun from freshman Kendyl Lindaman and a sacrifice fly from Groenewegen that tied the game.

The score remained deadlocked until the bottom of the eighth, when junior Dani Wagner punched a single to the outfield to drive home Ellie Cowger, and the Gophers notched their second walk-off in as many weekends.

“I guess I was just seeing the ball well at the plate,” Wagner said. “Just staying on time and working through my at-bats … they ended up in my favor.”

Senior Sam Macken found her groove at the plate, going 3-4 with five RBI. Macken is settling into a new position this spring, and is starting to find her way back in the box again.

“It’s just … hard to hit,” said Allister. “You have to be stubbornly positive [about hitting], and Sam’s done that.”

Minnesota looked to take down the Wolfpack for a second consecutive game on Sunday to bookend a 9-0 start.

After a scoreless top of the first, the Gophers offense again opened the floodgates and scored four runs in the bottom of the inning.

The Wolfpack went scoreless over the next three innings and the Gophers struck again in the fourth when pinch-hitter Taylor Chell hit a two-run homerun, which extended the Minnesota lead to 6-0.

Wagner added a solo shot in the sixth to cap the Gophers at seven runs on the day.

Groenewegen once again got the start in the circle and held North Carolina State to just one hit over her five innings.

Freshman Carlie Brandt came on in relief and gave up just one run in two innings to solidify a 7-1 victory for the Gophers.

While 9-0 is a record start for Minnesota, Allister isn’t letting the history get the team ahead of itself.

“All it means is it’s over, and we have to move forward,” she said.