Libero Christine Tan has helped the Gophers reach No. 5 in the nation. 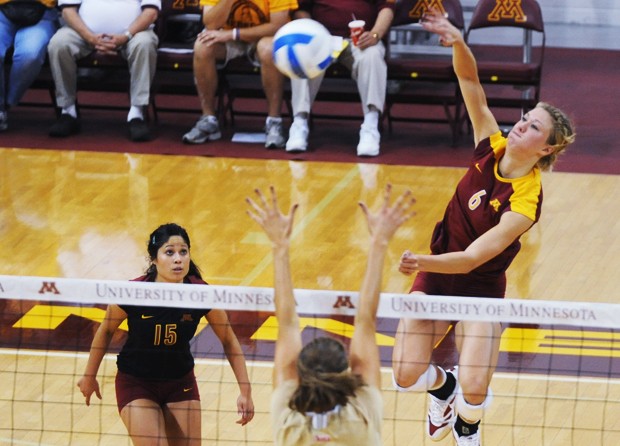 Christine Tan may only stand 5 feet 4 inches tall, but she is a defensive monster on the volleyball court. The senior libero came to the Gophers from Palm Harbor, Fla. where she was named Pinellas County Player of the Year as a high school senior. Tan has progressed each season she has been with Minnesota. Starting by averaging 2.59 digs per set as a freshman, she then increased her average to 4.85 digs per set her sophomore year. Last season, Tan led the Big Ten with a 4.89 dps average and had 611 total digs. Since joining the Gophers in 2006, Tan has played in all 128 of MinnesotaâÄôs matches. âÄúThereâÄôs nothing that she hasnâÄôt experienced,âÄù Gophers head coach Mike Hebert said. âÄúShe knows the system, the facility and it really helps her mentor our younger players. SheâÄôs basically another coach on the court.âÄù TanâÄôs personal accomplishments include being named Big Ten Defensive Player of the Year, first-team All-Big Ten and honorable mention All-America in 2008. On Monday Tan was named Big Ten defensive player of the week, the ninth weekly Big Ten award of her prolific career at Minnesota. In her final season with the Gophers, Tan is looking to put her name in the record books. SheâÄôs second all-time in digs for Minnesota, with 1,648 combined in her three-plus seasons. She trails only Paula Gentil, who Tan replaced in 2006, who holds the record with 2,791 digs. A lot of things are more important than putting up strong numbers for Tan. Being the lone returning senior, she is the longest tenured Gophers volleyball player. Tan said she takes the responsibilities of being a senior leader very seriously. âÄúI try to lead by example off the court,âÄù Tan said. âÄúOn the court I try to keep tabs on things and remind people of how weâÄôve always operated here.âÄù As a defensive specialist, Tan plays the most inglorious position in volleyball. Liberos constantly take a beating, having to dive for ball after ball, while receiving little recognition in the stats box. Digs are often the only statistic that liberoâÄôs receive. They donâÄôt lead directly to points scored, so theyâÄôre not talked about as often as kills or blocks. But that doesnâÄôt make the libero any less important and TanâÄôs play at the position has earned her the respect of her teammates. âÄúSheâÄôs the one whoâÄôs talking all the time,âÄù junior Brook Dieter said. âÄúShe communicates to us whatâÄôs going on, on both sides of the court. SheâÄôs always the one whoâÄôs hustling and going after every ball, and thatâÄôs really important to have someone that is so defensively aggressive.âÄù Despite the numerous personal accomplishments Tan has achieved over her Gophers career, she remains thirsty for more. TanâÄôs 2006 Gophers team freshman made the Elite Eight and Tan believes this team, currently ranked No. 5 in the nation, has the opportunity to do one better. âÄúI want us to go to Final Four,âÄù she said. âÄúI think that that spot is open and weâÄôre a team that just keeps getting better, and by the time we get to the tournament, we should be great.âÄù