This spring break, 30 Muslim and Christian students from the University will travel to New York City to engage in service projects and interfaith dialogues. 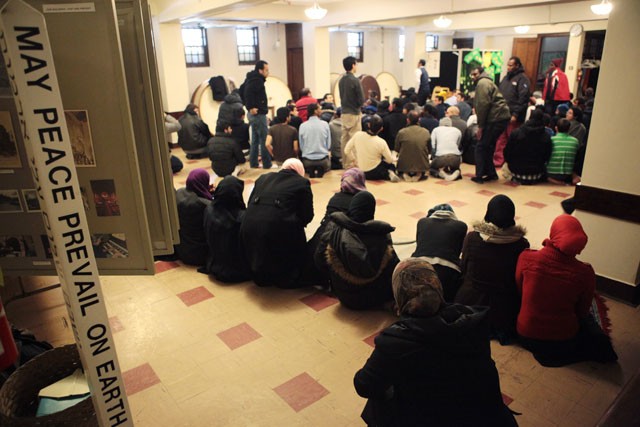 Muslim students and community members gather for noon prayer Friday in Fellowship Hall at Grace University Lutheran Church. Men are required to attend the prayer and around 100 were present on Friday.

Worshippers entering Grace University Lutheran Church on Friday didnâÄôt go the sanctuary and sit in pews facing the altar. They didnâÄôt listen to the pastorâÄôs sermon or sing hymns.
Instead, they took off their shoes, performed the wudu, or ritual cleansing, and kneeled or sat cross-legged on the floor in the downstairs Fellowship Hall. More than 100 Muslims knelt shoulder-to-shoulder in straight rows and began their prayers in Arabic.
It may seem uncommon for Muslims to worship in a Christian church, but it is a âÄúwonderful way to support each other,âÄù said Mary Halvorson, co-pastor at Grace Lutheran. âÄúWeâÄôre delighted that we can be a place of hospitality.âÄù
Muslim students and community members join for a prayer session every Friday, usually using rooms in Coffman Union. But Grace Lutheran offers its space a handful of times each year when Coffman is booked or when there are too many worshippers.
âÄúThe great thing about being a Muslim is that we can pray anywhere,âÄù said Abdirahman Ikar, the khatib  who delivered the sermon at FridayâÄôs afternoon session. However, he added, no imagery of a deity is allowed in the room of prayer.
Mohammed Hanif, president of the Muslim Student Association on campus, said the most important aspects of prayer are having a space to pray and âÄúclean and pureâÄù intentions.
Muslims face the KaâÄôba, or in the direction of Mecca. In Grace Lutheran, that means facing the northeast corner of the room.
After an hour of prayer Friday, worshippers folded their prayer rugs, conversed heartily and rearranged the roomâÄôs furniture exactly as it was before they began.
Worship space is not the only thing Muslims and Christians share on campus.
This spring break, 30 Muslim and Christian students from the University of Minnesota will travel to New York City to engage in service projects and interfaith dialogues.
The two religions are represented by Lutheran Campus Ministry, part of the Evangelical Lutheran Church in America and Al-Madinah Cultural Center, a Muslim student group dedicated to creating a better understanding of Islam.
The students will serve at soup kitchens, deliver meals to elderly people and visit ELCA and Muslim service sites.
Aside from community service, they will tour the World Trade Center site  and the nearby Park51 Islamic Center, a Muslim community center.
Kate Reuer, LCM campus pastor and one of the tripâÄôs leaders, said the two religions share the values of hospitality, curiosity, service and concern for each othersâÄô neighbor. She said relationships and friendships are built around these values.
âÄúIf and when something happens, like whatâÄôs happening in Egypt or what happened during 9/11, then we have natural relationships to work to build a better world together,âÄù she said. âÄúOur differences donâÄôt have to divide us âÄî they can actually make us stronger.âÄù
LCM organizes a spring break trip every year, but last September some of its members presented the idea to converge the 2011 trip with some of their Muslim friends and classmates. They have since had weekly meetings to sharpen the tripâÄôs details.
One of the trip-goers, Dina Elrashidy, a member of Al-Madinah, said she has always had a large group of Christian friends.
âÄúIâÄôve always had that perspective that everyone could get along,âÄù Elrashidy said. âÄúIâÄôve always been kind of a part of both traditions in a way.âÄù
Bryna Godar, a volunteer for LCM, said she is not necessarily looking to learn the âÄúnuts and boltsâÄù of the Islamic religion, but to know more people of the faith.
âÄúOne objective is to come out with more friends that are across that faith divide and then hopefully keep spreading that cooperation between faiths toward other people we know,âÄù Godar said. âÄúHopefully it will create more of a joint community as opposed to these two divided communities on campus.âÄù
The trip is the first platform of its kind at the University between the two religions.
âÄúI think people âÄî at least people in the Lutheran Campus Ministry world âÄî are really watching this trip, and theyâÄôre really curious about it,âÄù Halvorson said.
She said it will show people within the community and across the U.S. how people can âÄúlive with difference.âÄù