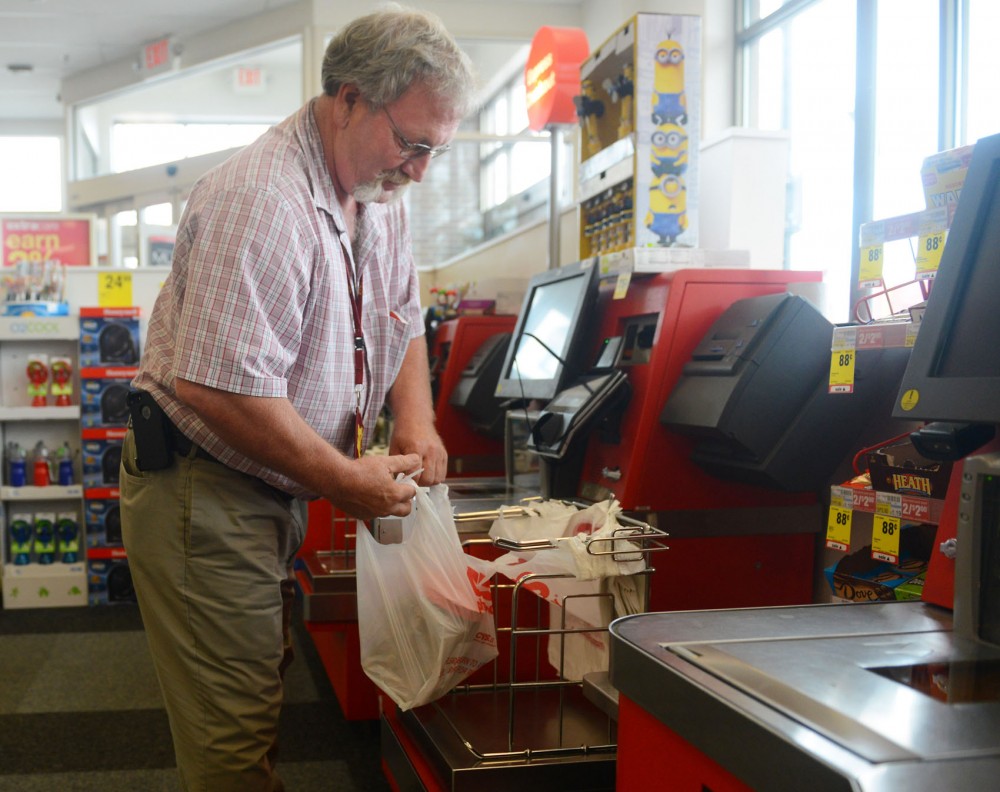 Paul Schoenecker places his purchased items in a plastic bag at CVS on Tuesday. Ward 2 City Councilman Cam Gordon hopes to reduce the city's environmental impact by keeping bags out of landfills and possibly banning plastic bags at retail sites throughout the city.

Benjamin Farniok
Minneapolis stores might have to find a new way to pack groceries if a proposal to ban plastic bags passes through City Council by the end of this year.
Though some University of Minnesota-area residents and business owners agree the potential ordinance could be a positive change, some worry it’ll turn off customers who rely on plastic bags. Ward 2 City Councilman Cam Gordon will introduce the idea to the council next week, following recommendations from the Community Environmental
Advisory Commission to rid city businesses of plastic bags.
Should the proposal pass, Gordon said the city will decide between banning bags altogether and charging a fee per bag.
Ward 9 City Councilwoman Alondra Cano, who represents the Phillips and Powderhorn Park areas, said the ban could help reduce pollution and litter in the city.
But Cano said she thinks easing into the change would reduce the immediate impact on business owners and customers, similar to the Styrofoam container ban in restaurants, which went into effect in the city earlier this year.
“I would prefer a phased-in approach to the ban instead of a punitive approach that would punish people,” Cano said.
Instead of using plastic bags for carrying groceries and other goods, Cano suggests business owners consider handing out reusable bags.
She said she thinks city officials involved with the proposal should solicit community feedback before making a change.
Some students, like biology, society and environment senior Jenna Krueger, are supportive of the ban. Still, she said she uses plastic bags if she makes an unplanned visit to the store and doesn’t have time to run home and grab a reusable bag.
Others, like mathematics senior Michael Bolland, also stand behind the proposal. He said the ban would make his apartment less cluttered.
“I live in an apartment with five people, so we go grocery shopping once a week, and that’s like four bags per person,” he said. “We end up with a pile in our living room that we end up recycling.”
But some store owners and workers are concerned the ban could turn customers away from making a stop at their stores.
Bassel “Bobby” Banat, owner of Bobby’s Corner Market on Como Avenue Southeast, said his customers often ask for
plastic bags to carry their purchases. He said he thinks some customers would be angry if the option was no longer available, though he supports alternatives.
“Maybe we can start getting more paper bags,” he said. “That would help protect the environment.”
Dinkytown CVS Pharmacy store manager Jocelyn Olson said that while she personally supports the ban, it could be inconvenient for customers.
“From a store level, [a ban] makes sense, but on a people level, not so much,” she said.
Delete Image
Align Left
Align Center
Align Right
Align Left
Align Center
Delete Heading