Junior forward Seth Ambroz had four goals, including two game-winners, in the series. 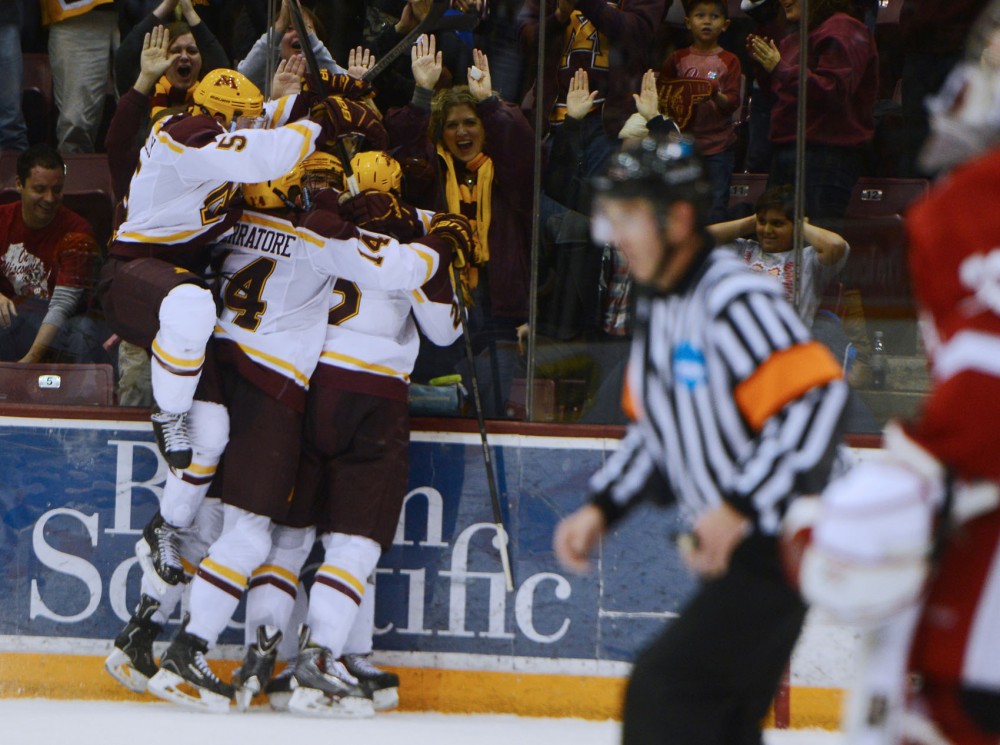 Gophers junior forward Seth Ambroz is the greatest player the new Big Ten hockey conference has ever seen — at least through the conference’s first weekend of existence.

Ambroz, who’s been a third-line grinder for most of his career, was fundamental in the Gophers’ series sweep of the Badgers during the weekend. He had four goals in the series, including two game-winners, to push his total to seven this season — a team high.

His fourth goal this weekend was the biggest and capped a successful series for Minnesota.

Gophers junior center Travis Boyd forced a crucial turnover in the offensive zone late in the game Saturday, and Ambroz pounded the puck home with less than a minute left in the game.

“I was fortunate to be there,” Ambroz said, crediting Boyd for the game-winning assist. “It was one of the biggest goals of my career.”

Those are the types of goals the team has come to expect from Ambroz.

“He’s going to score some goals by getting around the net and the blue paint,” head coach Don Lucia said, noting the overall improvements Ambroz has made since last season. “We’re playing him a lot of minutes [this year].”

Lucia said he stressed to his team the importance of opening up the conference slate with a win.

Ambroz and the rest of his line apparently got the message and accounted for half the goals in the series.

“[They were a] big reason we were able to get two wins,” Lucia said.

In the series opener Friday night, the third line accounted for two goals in a 4-1 win. Lucia rewarded the trio with the start Saturday.

“There are some studs on that line,” Rau said. “It’s not like they’re a third line. They could be a first line for some other teams.”

The Gophers went down early in Saturday night’s 4-3 win but were able to respond in the face of adversity each time.

Wisconsin took an early lead less than five minutes into the game, but Minnesota was quick to answer with a game-tying goal less than a minute later.

The Badgers retook the lead at the end of the first period, but Ambroz tied it with his third goal of the weekend late in the second frame.

In the third period, both teams traded goals before Ambroz lifted his team to the win with a “dirty goal” in the crease.

Ambroz got most of the glory this weekend, but he credited his linemates for putting him in the right positions.

“[We’ve] been working hard, causing turnovers and mucking it up,” he said. “I was just lucky enough to get the goals.”

Minnesota was slotted to finish second behind Wisconsin in the Big Ten preseason poll, but after the first series in the new conference, the Gophers are the team to beat.

Lucia said the series served as a good test for his team early in the Big Ten season.

“It was a good weekend for us,” he said. “There’s a reason they were favored to win the league.”

Still, the Gophers said they understand many games are left in the conference and are happy to take points away from the rivalry matchup.

“There are only six teams [in the Big Ten] right now,” Ambroz said. “They’re all good teams. There’s some depth in the league. … [So] every point counts now.”