Offense provides too little, too late for Minnesota. 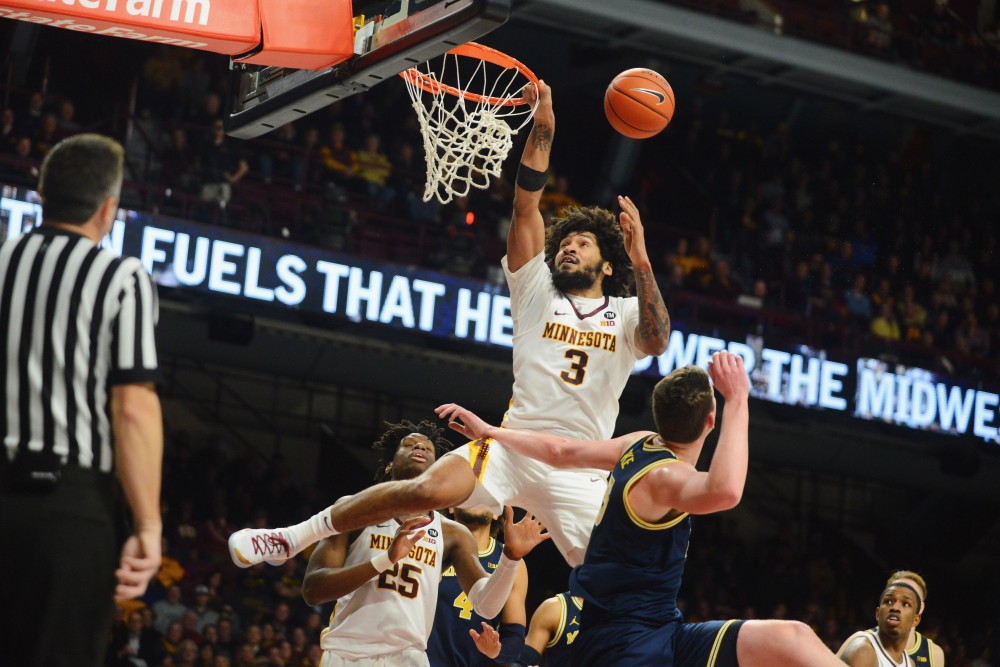 Senior Jordan Murphy goes to dunk the ball on Thursday, Feb. 21 at Williams Arena in Minneapolis.

On Jan. 16 in Ann Arbor, Michigan, Minnesota charged back from a 13-point deficit, only to fall just short on a buzzer-beater.

Thursday night, the Gophers fell to the Wolverines once again but in decidedly less dramatic fashion.

“Offensively we were really inefficient,” said head coach Richard Pitino . “It’s similar to a couple of our other games this year where you go 1-10 from the 3-point line, you miss nine free throws. Really, really hard to win.”

Similar to the first meeting, both teams worked to get the ball down low near the basket. The game’s first six baskets came in the paint before Michigan hit a 3-pointer to take a 9-6 lead.

Following that field goal, Minnesota failed to score for nearly three minutes while the Wolverines built an 11-point lead. But that wasn’t the largest scoring drought for the Gophers in the first half, as they limped through a stretch of 5:23 without points before freshman Daniel Oturu stopped the skid with an even two minutes until halftime.

Oturu was the lone bright spot for Minnesota in the first half. While Michigan held every other Gophers player in check, Oturu erupted for a first-half double-double. Thanks to his scoring over half of Minnesota’s points, the Gophers cut Michigan’s lead to 10 at halftime after Oturu tipped in a layup at the buzzer.

“He was good,” Pitino said of Oturu. “He’s still got so much room to grow but he’s talented offensively. He can score the basketball a variety of ways [and] he’s rebounding. Any time you have freshman in there like that, it can be hard at times, but this has been a very good year for him to grow and get better and he’s shown that.”

Junior Amir Coffey cut the deficit to eight 1:02 into the second half on a layup, which was the first field goal a Minnesota guard converted all game. Following that, however, Michigan scored 12 of the game’s next 14 points to silence the crowd and deflate the Gophers.

The final 10 points of the Michigan run came with senior Jordan Murphy on the bench with three fouls.  Without him, Minnesota could no longer slow down the Wolverines. Michigan junior Jon Teske hit a 3-pointer to extend his team’s lead to 18 points.

After making 12 3-pointers against Indiana last weekend, Minnesota converted just once on 10 attempts from behind the arc on Thursday. All of Minnesota’s guards were held to single-digit scoring. Conversely, the Gophers’ starting forwards both turned in impressive performances. Oturu finished with 18 points and 12 rebounds while Murphy totaled a double-double of his own with 18 points and 15 rebounds.

“It was tough,” Oturu said of defending Teske. “He’s a good shooter especially for his size. He hit some big [shots].”

Minnesota will travel to New Jersey this weekend to play Rutgers on Sunday. The Gophers earned a 88-70  victory in the teams’ first meeting on Jan. 12.

“We can’t take any game for granted,” Murphy said. “We can’t underestimate any opponent, we can’t afford to.  We have to play them like we’d play any other team. We just have to stick to our coach’s game plan.”