Not all first-years felt the orientation was as relaxed as it was intended to be. 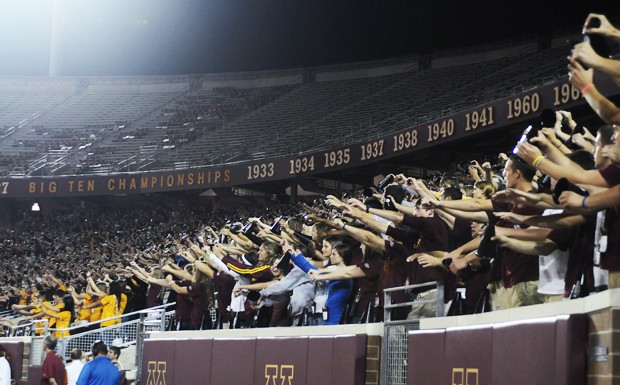 University of Minnesota first-year students participate in cheers led by the University Spirit Squad at the TCF Bank Stadium on Thursday.

The University of Minnesota Orientation and First-Year Programs (OFYP) office kicked off the second annual Welcome Week on Sept. 2 , with changes aimed at making the program more relaxed and less stressful for incoming first-years. Many attendees, however, still saw the week as more grueling than relaxing. âÄúIt feels like a job, almost,âÄù first-year Jake Malm said. âÄúI think they want to make us the perfect student.âÄù OFYP Director Beth Lingren Clark said the most common complaint seen in last yearâÄôs Welcome Week student evaluations was that students felt too rushed. âÄúOne of the things they told us [was] that they needed a little bit more time to get settled in their residence halls and take care of business,âÄù Lingren Clark said. Kinesiology sophomore Alex Antonen attended last yearâÄôs Welcome Week and said that although he didnâÄôt think the week was too fast-paced, he and his peers felt it did entail too much time in the classroom. âÄúThey kept us busy, but thatâÄôs kind of what you have to do,âÄù he said. âÄúIt was kind of boring, [with] all the seminars we had to go to and whatnot.âÄù In response to these complaints, New Student Convocation was moved from Wednesday night âÄî move-in day âÄî to Thursday morning, Lingren Clark said. The first-yearsâÄô small group meetings were moved from after Convocation to Wednesday night to provide a relaxed setting to get acquainted with the schedule and policies for the next week, she said. Jennifer Porter, associate director of Welcome Week , said student Welcome Week leaders also had more flexibility this year and arenâÄôt âÄúscheduled every half hour to be someplace,âÄù like last yearâÄôs program. âÄúItâÄôs designed to be a little bit more of a relaxed schedule,âÄù Lingren Clark said, adding that the overarching goal of the programâÄôs many components is to ease anxiety on the studentsâÄô first day of classes by preparing them beforehand. âÄúWeâÄôre really just trying to teach them everything before classes start,âÄù Lingren Clark said, âÄúso that when classes start, thatâÄôs the only thing theyâÄôre focused on,âÄù First-year student Lucie Biros acknowledged that the activities are worthwhile but said they were packed into too short a time span. Welcome Week activities included a speech from motivational speaker Jermaine Davis , a Target shopping run for last-minute dorm necessities and College Day , which focused on each studentâÄôs specific college and its resources. Thursday nightâÄôs Pride & Spirit event was perhaps the most popular of the program. The event, held in TCF Bank Stadium, served as a pep rally for first-years, with Goldy Gopher dancing, head sports coaches speaking and groups like the Minnesota Marching Band and the Spirit Squad performing. Although the assembly went smoothly for the energetic first-years, it also highlighted the dismay of new students who were not permitted to take part. Architecture junior Matt Greeninger , who transferred into the University this fall, watched the hour-long spirit event with fellow junior and transfer student Tom Enge t through the gates at the front of the stadium. OFYP did not grant transfer students tickets to the event. New transfers chose from either a complete day on campus or a partial day on campus with an online component for their orientation. âÄúWe were hoping we could get in here,âÄù Greeninger said, adding he felt transfer students should have been offered more orientation in general. Enget, a history student, said that although he was lucky enough to transfer with a friend, many transfer students, just like first-years, do not know people at college when they first arrive.