Pro Day offers others a chance

The Gophers had nine players work out for scouts Monday morning. 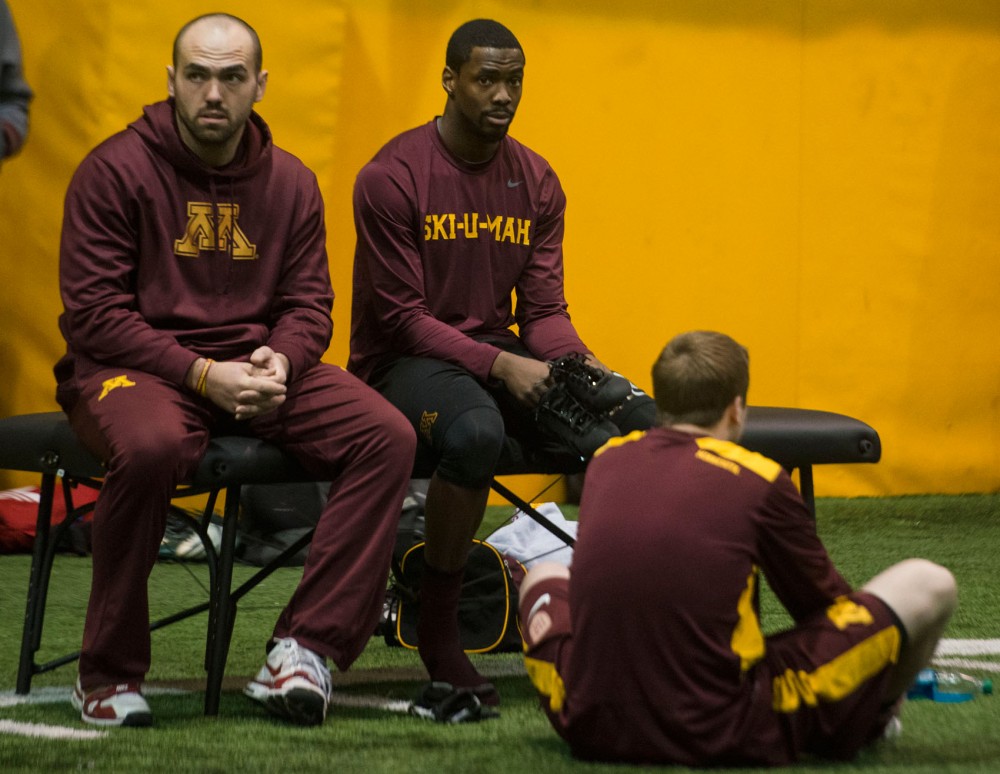 While a majority of scouts showed up to evaluate defensive lineman Ra’Shede Hageman and defensive back Brock Vereen, Monday’s Pro Day also afforded lesser-known players a chance to turn some heads.

“It [all] comes down to competition,” former defensive lineman Roland Johnson said. “It’s great to get out there and compete with the big dogs.”

Johnson wowed spectators and teammates when he bench-pressed 225 pounds, 40 times.

Johnson was one of nine former Gophers players who worked out in front of NFL scouts Monday morning at the Gibson-Nagurski Football Complex.

Afterward, friends, family, agents and media watched the NFL hopefuls participate in individual position drills, some of which were run by Minnesota Vikings
coaches.

Former Gophers linebacker Aaron Hill worked with Vikings coaches during linebacker drills, and he said afterward that he felt good about his performance.

“This is my last time working out in the facility with this senior group,” Hill said. “I’m happy with where I’m at right now.”

Hill is wrapping up his master’s degree in applied kinesiology. He’s hoping to catch on with an NFL team but said he’d be open to other opportunities if the NFL doesn’t work out.

There aren’t many opportunities in the NFL for long snappers. Though every team needs one, only two were invited to the combine.

The Gophers recruited Jake Filkins to wrestle before he spent four years on the football team as a long snapper.

“I’ve got a rare skill that not many people can do,” Filkins said. “And for whatever reason, I’m good at it.”

Filkins and the Gophers seniors who aren’t named Hageman or Vereen prepped for their Pro Day by working together with Gophers speed and strength coaches.

While Johnson posted 40 reps on the bench press, former Gophers defensive back Jeremy Baltazar turned heads as well with 27 reps.

Johnson’s 40 reps on the bench press would have been the second-highest of any participant at the 2014 NFL Combine.

Still, he said he was mostly disappointed with his workout Monday.

“I didn’t finish,” he said, adding that he did meet a couple of scouts and shake a couple of hands during the Pro Day workouts.

In all, 19 NFL teams sent representatives to the morning workouts.

“There’s a lot of hidden talent up in these areas, and you never know what you’re going to come across,” he said.