Femme fatale at the Turf Club

Mina Moore will perform in a tribute show to Women in Music. 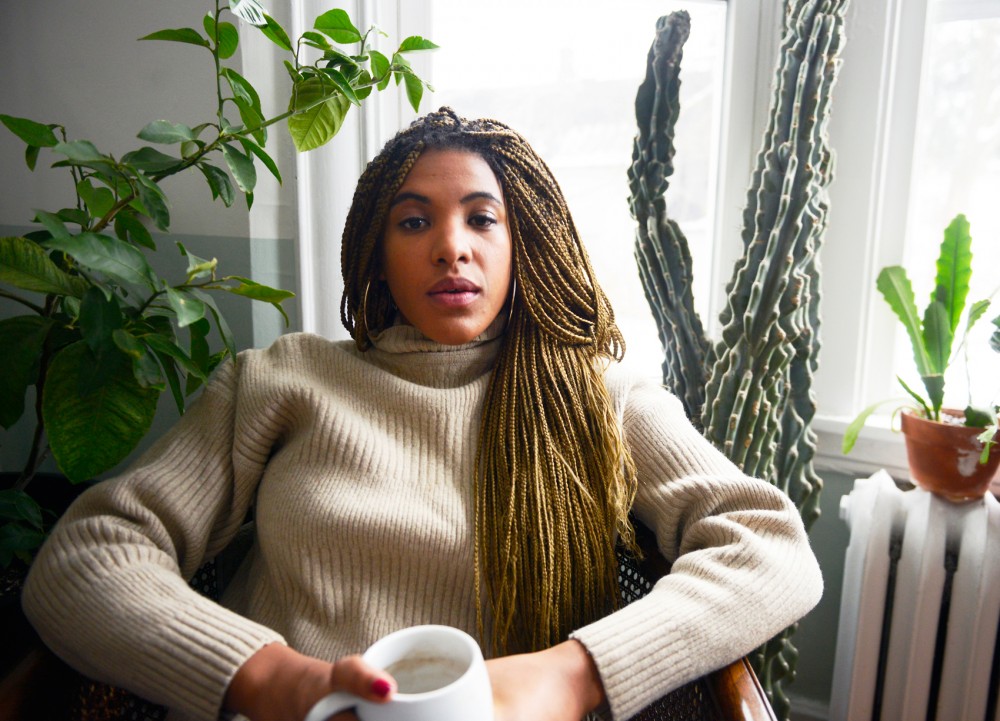 Musician Mina Moore poses for portraits inside of her home on Tuesday. Moore is set to preform in the Girl Germs Live Tribute to Women in Music at the Turf Club this Saturday with Nona Marie, Bad Bad Hats, Bruise Violet and Suzie.

Brenda Tran
Local neo-soul and rhythm and blues singer Yasmina Moore-Foster, better known as Mina Moore, will join in on a night of femme fatale performances this Saturday at the Turf Club as part of the annual Girl Germs Live Tribute to Women in Music.
The show covers exemplary female musicians from Patti Smith and Lunachicks to Janet Jackson.  Included on the bill are Nona Marie, Bad Bad Hats, Bruise Violet and Suzie.
Although the 30-year-old songstress only recently began her solo project, Moore-Foster is no stranger to the local music scene. In junior high she joined her first band, the Sugar Divas. The band went from performing at birthday parties to clubs and bars. The Time’s Jellybean Johnson and Stanley “Chance” Howard recorded and produced their
first album.
After a break from the local music scene, Foster-Moore returned with more projects. She collaborated with Al Church on the experimental, multi-genre indie-pop project Dear Data and toured with Caroline Smith.
Moore-Foster is now taking a crack at a solo project as she prepares for the release of her upcoming album. Mina Moore started out as an ongoing conversation between
Moore-Foster and Casey O’Brien, a bass player and producer. The push for a release occurred after Moore-Foster won a songwriting contest hosted by the Humans Win! recording studio in Northeast Minneapolis.
The musical sound of Mina Moore is a continual and impulsive process that operates on a subconscious level. Her influences include a wide array of musicians, from the likes of Paul Simon to Miles Davis and Sia. Although she currently identifies with neo-soul, funk and rhythm and blues, she said there is a possibility for alterations in sound. The one thing that remains constant, she said, is a groove-oriented sound.
“When I hear new music, I always listen for the groove, and I listen for a melody. If you can write a good song, that’s what appeals to people most because it gets to this sort of timelessness and transcendence,” Moore-Foster said.
In contrast to Moore-Foster’s impulsive approach to sound development, her upcoming album, currently untitled, was carefully crafted. The content of the album required a special amount of consideration, tackling concepts such as female empowerment and the relatable love song. Moore-Foster indicated her past struggle of writing love songs due to self-consciousness; she had to slowly ease herself into it, first by writing a song for her late aunt, then by writing a song for a friend.
“I have never been able to write a love song — I always felt so silly doing it, and I could never write an earnest love song,” Moore-Foster said.
In her album, she decided to create love songs for women.
“None of my VH1 divas are ever singing about women. … It’s always about a man — of course, this is also because it was men writing the songs for them — but nine out of 10 times they don’t even love them back. It’s for my ladies, empowering women, reminding ourselves that we can be successful and creative while celebrating each other,” Moore-Foster said.
Entertainment is not the only item on Moore-Foster’s musical agenda. Her additional objectives include education on social issues and empowerment.
“I am a feminist; I am a social and political activist. … So if you come to a show, yes, I want to entertain but also to educate and try to bring something you can talk about with other people,” she said.
Girl Germs Live Tribute to Women in Music
Where 1601 University Ave. W., St Paul
When 8 p.m. Saturday
Cost $10 advance, $12 door
Ages 21+
Delete Image
Align Left
Align Center
Align Right
Align Left
Align Center
Delete Heading