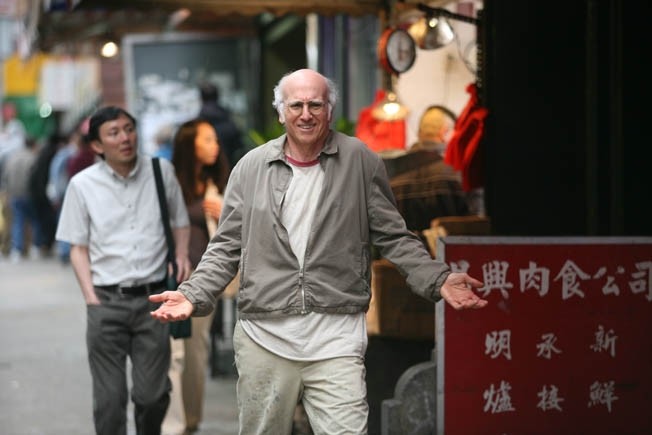 âÄúWhatever WorksâÄù STARRING: Larry David, Patricia Clarkson, Evan Rachel Wood DIRECTED BY: Woody Allen RATED: PG-13 SHOWING: Lagoon Cinema, 1320 Lagoon Ave. Can Larry David escape the bonds of âÄúLarry David,âÄù the beloved curmudgeon of âÄúCurb Your Enthusiasm,âÄù and create a new, believable character that possesses many of the same characteristics? Can a Woody Allen film possibly go against traditional grain and have said older man NOT end up with a gorgeous young girl? Can a Woody Allen film always be summed up in rhetorical questions and a rapid-fire barrage of wordiness? Read on to find out. In the movie, Wood plays Melodie St. Ann Celestine , a super naÃ¯ve Mississippi girl who runs away to New York City after being caught âÄúfornicatingâÄù with a classmate in her Ã¼ber religious hometown. Luckily she encounters the Allen stand-in, Boris (David), who constantly talks down to her, insults her intelligence and inexplicably makes her fall in love with him, neuroses and all. Classic Allen for the masses, once again. And, in fact, âÄúWhatever WorksâÄù is essentially a blast from the past, only barely updated for today. The script was written by Allen in his âÄô70s heyday, but when his top choice to play Boris, comedian Zero Mostel, died, Woody threw the project aside, not dusting it off until now. Luckily, despite finding itself in a changed cultural climate, it retains much of its original freshness and charm. If Allen wouldâÄôve appeared alongside David (since he seems to like to star in his own flicks), the screen would have exploded from all the zippy dialogue, anxious nebbishness, hypochondria and constant chatter that Allen has helped trademark as Jewish humor. Boris sleeps with a light on because of nightmares, constantly fears the day heâÄôll die and has a tendency to jump out the window when the going gets tough. ItâÄôs a good thing Woody doesnâÄôt show up, because David fares better as the cantankerous, supposed genius whose Bohemian New York existence is interrupted by Melodie, and later her family, who show up after a year in search of their M.I.A. daughter. While Wood is luminous and cheerfully charming as Melodie, and David is, well, Larry David as Boris, itâÄôs MelodieâÄôs parents âÄî particularly Patricia Clarkson as Marietta âÄî who steal the show. With a Southern-fried accent and newfound penchant for threesomes, ClarksonâÄôs Marietta finds an artistic passion sheâÄôs stifled as a good Christian wife and soaks the screen with a honeyed sexiness. Though Clarkson is often seen in dramatic roles, sheâÄôs a comedienne of the highest order âÄî a Carole Lombard in a hippie headscarf. And letâÄôs just say that MelodieâÄôs conservative, NRA member daddy, played by Ed Begley Jr., gives into a homoerotic desire heâÄôs been harboring since his days on the high school football team. Though Boris is prone (like any Woody Allen hero) to whining about the end of the world and the demise of society, calling everyone of lesser intelligence âÄúcretinsâÄù and âÄúinchworms,âÄù âÄúWhatever WorksâÄù is no droning, grating movie-watching experience. In fact, itâÄôs the complete opposite; 92 minutes fly by in a delicious haze of fun. David breaks the fourth wall and talks to the audience (a Woody trademark) and, yeah, that really only worked in âÄúFerris BuellerâÄôs Day Off,âÄù but itâÄôs the easiest way to get inside the characterâÄôs head. Allen and his cast pack a lot of words into one conversation, so you have to pay attention. Luckily, the movie is such a delight, from its swoony sentimental soundtrack to its happy-in-spite-of-itself ending, that monumental task seems easy. âÄúPeople make life so much worse than it has to be,âÄù pontificates Boris in one diatribe to his audience. And thatâÄôs the heart of âÄúWhatever Works,âÄù really. Do what makes you happy, and tell people just exactly how you feel âÄî itâÄôs worked for Allen, and it works just fine in âÄúWhatever Works.âÄù