The developer will open its newest co-op style apartments in Southeast Como next year. 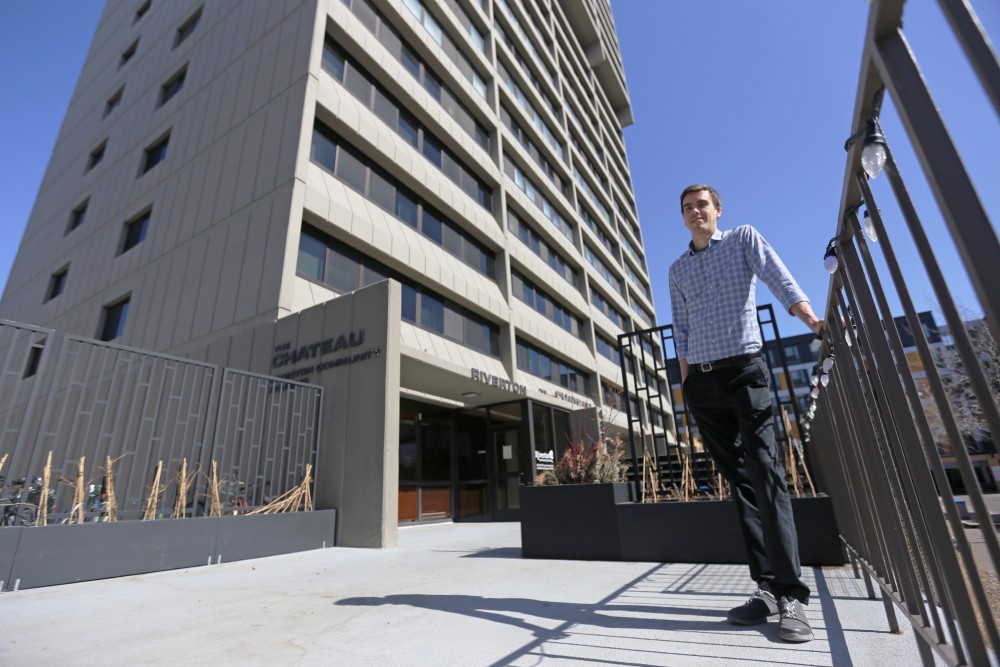 Riverton Community Housing Leasing Manager Joe Goetzke, who has worked for the co-op housing organization since 2011, poses for a portrait outside The Chateau on Tuesday, April 24 in Dinkytown. Riverton is opening a new co-op housing site in the former Bunge Tower grain elevator.

Despite an influx of luxury apartments near the University of Minnesota, a local developer has expanded its campus presence by building more affordable, cooperative housing complexes.

Riverton Community Housing offers cooperative housing options throughout the Marcy-Holmes, Southeast Como and Seward neighborhoods. The nonprofit currently owns six different buildings, five of which are co-ops. A seventh in Southeast Como is holding a ribbon-cutting ceremony Thursday, and is slated to open in August of 2019.

Cooperative housing gives tenants authority to make decisions about building operations, community events and living costs on a board of directors. These are duties typically left for a landlord or superintendent.

According to Goetzke, 75 percent of Riverton’s units are designated for households under 80 percent of the median family income and currently serve upwards of 850 students.

Riverton’s most recent project was the Fourth Street Housing Co-op in 2015, which Goetzke said was expected to be their last project.

“Then, lo and behold, [the Fourth Street Co-op] was so successful, and we were approached for a partnership on the Bunge Tower site to do another one,” Goetzke said. “As it turns out, we [determined] that it fit within our strategic plan for the near future.”

Gary Ellis, executive director of Riverton for over 20 years, said Riverton is one of the largest student cooperative organizations in the country.

“[Riverton] should continue to grow, I mean we’ve got solid properties … [in a] good location and they have good occupancy,” he said.

Riverton’s standing as a nonprofit organization lets them offer lower rent, Hoerning said, adding that having low rent in the neighborhood creates competition, forcing other apartments to keep their rates steady.

He said the nonprofit model also offers an alternative to for-profit housing companies, which may only make decisions based on possible revenue.

“Cooperatives can kind of hedge that, and the board of directors can make decisions that aren’t always profit-oriented,” Hoerning said.

Ellen Doering, a University alumna, has lived in Riverton’s Marcy Park building for nearly two years. She said the student co-op offers community events year-round that cater to student schedules, including food in common areas during finals week and welcoming events in September.

“That’s part of the point of living in a housing cooperative … you all work together on stuff,” Doering said.

Riverton began its campus presence in 1945 as Chateau Co-op Dining Club, and offered students a place to socialize over low-cost meals.

As the environment of Dinkytown changed in the late ’60s, the co-op food model grew less appealing to the neighborhood, Goetzke said.

To adjust to the shifting climate, University students worked with public and private partners, including the University itself, to secure funding for a new housing co-op. The Chateau Student Housing Co-Op first opened its doors to students in 1973, spawning the current organization.

The latest Riverton development, called the Brook Avenue Co-op, is adjacent to the Bunge Tower in Southeast Como. The tower will act as a shared common space with the Maya Commons project, another affordable housing development, located on 13th Avenue Southeast.