The running back had 22 carries for 115 yards against Purdue. 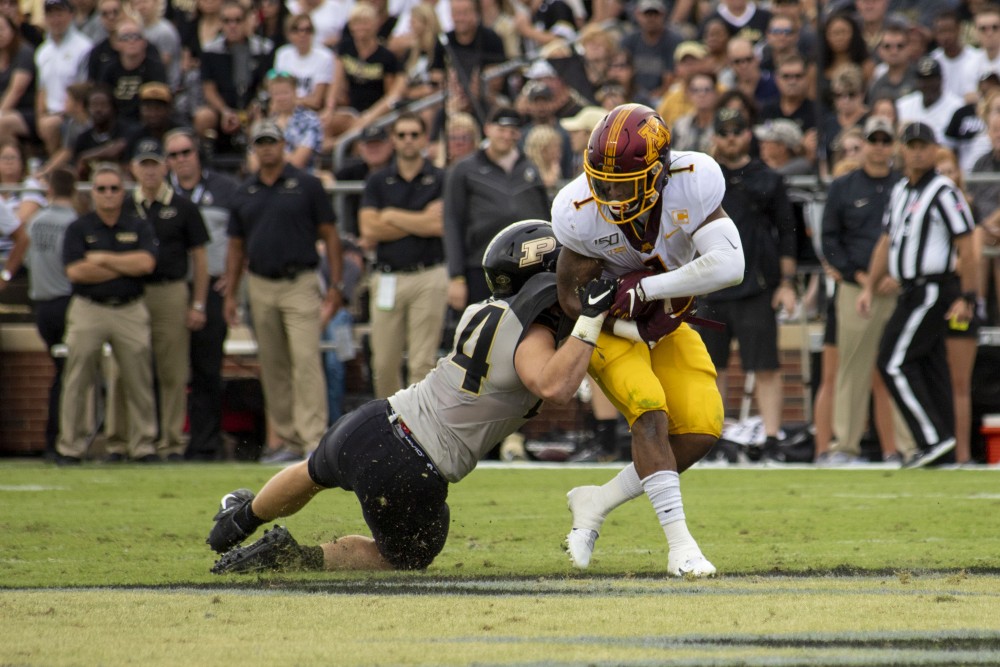 Running back Rodney Smith carries the ball at Ross-Ade Stadium on Saturday, Sept. 28, 2019. The Gophers earned a 38-31 victory over Purdue.

It feels like Rodney Smith has been a Gopher forever.

The now sixth-year senior running back began his Gopher career in 2014, where he used a redshirt his first season under head coach Jerry Kill. He was granted a medical redshirt after tearing his ACL in the 2018 season. Since returning, he’s provided stability among the running back group.

“I felt like in the Georgia Southern game that Rodney turned the corner,” offensive coordinator Kirk Ciarrocca said. “I liked how decisive he was in that game and I thought okay we’re moving forward now with him. We’re really shaking that rust off.”

With more injuries coming into the Purdue game, the Gophers needed Smith to step up. Fellow running back Mohamed Ibrahim was out with an injury, and Shannon Brooks is slowly integrating himself back into the offense. Due to that, Minnesota relied on their veteran back to lead the rushing attack.

“It was fun to get in a groove running the ball,” Smith said. “It was exciting to get in there and provide for the team. Whatever they needed, tried to do my role and make plays when they presented themselves.”

Smith finished the game averaging 5.2 yards on 22 carries for 115 yards and a touchdown. For the first time all year, Smith was the only running back that had double digit touches.

“What he did against Purdue didn’t surprise me at all,” Ciarrocca said. “He’s a great player. He’s proven that over time. He has a really high standard for himself.”

Smith has had quite the career with the maroon and gold. Heading into this week’s matchup, he has run for 3,287 yards, fourth-most in Gophers history. He passed Gophers great Marion Barber III earlier this season and is currently 523 yards behind Thomas Hamner for third-most.

The Minnesota offense dominated the Boilermakers in the game, as quarterback Tanner Morgan had a historic day passing. The performance opened up running lanes for Smith.

“We got guys out wide and at the tight end position that go out and help us out and that takes a little pressure off of us,” Smith said. “We know we have to be more explosive when we get those opportunities.”

The running backs know that they’ve been off to a stagnant start so far this year. They have not had a game where they have collectively averaged at least four yards per carry.

“We have to have more explosive runs,” Smith said. “We’re getting better, but definitely a lot more room for improvement for the running back room.”

Despite the injuries that the position has suffered throughout the season and the general lack of success running the ball, Smith has high praise for the way every running back who has received playing time.

“We’re mature … from top to bottom, anybody can go out there and do their job,” Smith said.