The incumbent faces challengers in Nekima Levy-Pounds, Jacob Frey ahead of April 4 caucuses. 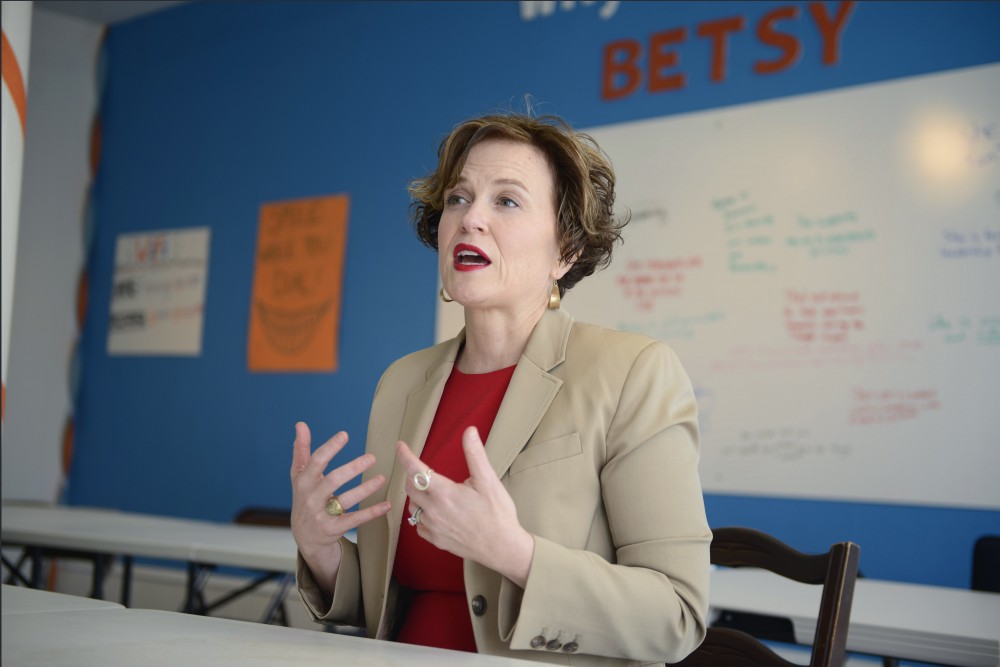 Minneapolis mayor Betsy Hodges talks about running for re-election on Friday, Mar. 31, 2017 in her campaign office in Minneapolis.

After four years, Betsy Hodges is running as a different candidate than when she made her first bid for mayor.

Now the incumbent, Hodges is proud of a record in office that could give her opponents the opportunity to point out faults in her decisions as Minneapolis’ leader.

Hodges said she can take the criticism, adding she’s excited for the April 4 precinct caucuses.

“I have a great record to run on, but it also means [that] what I’ve been up ,to everybody knows [about]. I don’t have the luxury of just saying I’ll do something,” Hodges said. “I have the responsibility to say what I have already been doing. Most of the candidates don’t fall into that category.”

In a less-crowded field than 2013, Hodges still has some powerful challengers to her re-election bid.

Jacob Frey, a City Council member, is expected to be her main opponent, bringing energy and a large public persona.

Another candidate, former Minneapolis NAACP chapter President, Nekima Levy-Pounds, could make a dent in Hodges’ support in North Minneapolis, said Larry Jacobs, University public policy professor and director of the Center for the Study of Politics and Governance.

Hodges has navigated Minneapolis through a tricky time, Jacobs said, with a focal point in the 2015 police shooting of Jamar Clark and subsequent occupation of the Minneapolis Police’s Fourth Precinct, which Hodges said was “incredibly challenging.”

“I’m a transformational leader. I’m helping lead this city through changes, not just in policy, but in systems,” Hodges said. “That is inherently uncomfortable.”

Over her time as mayor, Hodges said she has put $40 million toward affordable housing, and believes building community trust is where she has made most progress.

Sen. Scott Dibble, DFL-Minneapolis, and personal friend of Hodges since the 1990s, said she is a true progressive and has helped Minneapolis make significant strides.

Even though Hodges is the most “progressive and contemporary mayor” Minneapolis has ever seen, Jacobs said, her relationship with progressives is strained. She still hasn’t earned enthusiastic backing from progressives in her four years, he said.

Since the Clark shooting, Hodges said she needs to work on communicating better with stakeholders, the community and media.

Police community relations are very public now, Dibble said, but Hodges has been crucial for keeping them stable.

“She is the first mayor, bar none, who has made significant, tangible strides towards reformation of how the police department operates,” he said.

Jacobs said Hodges won decisively in the crowded 2013 field. Her advantage this time around will be her ability to be competitive in every precinct.

But four years in office during tumultuous times can harm relationships, and her incumbent lead doesn’t seem as large as she may like, Jacobs said.

“There seems to be more of an outright opposition for not delivering,” Jacobs said. “Anger for what is perceived to be political missteps. Distrust in some quarters. She is in a vulnerable spot.”