Quarantunes: A&E’s top ten albums from the first half of 2020

As another wave of lockdowns looks like an ever more likely possibility, here are A&E’s top ten albums from the first wave of social distancing to get you through a potential second. 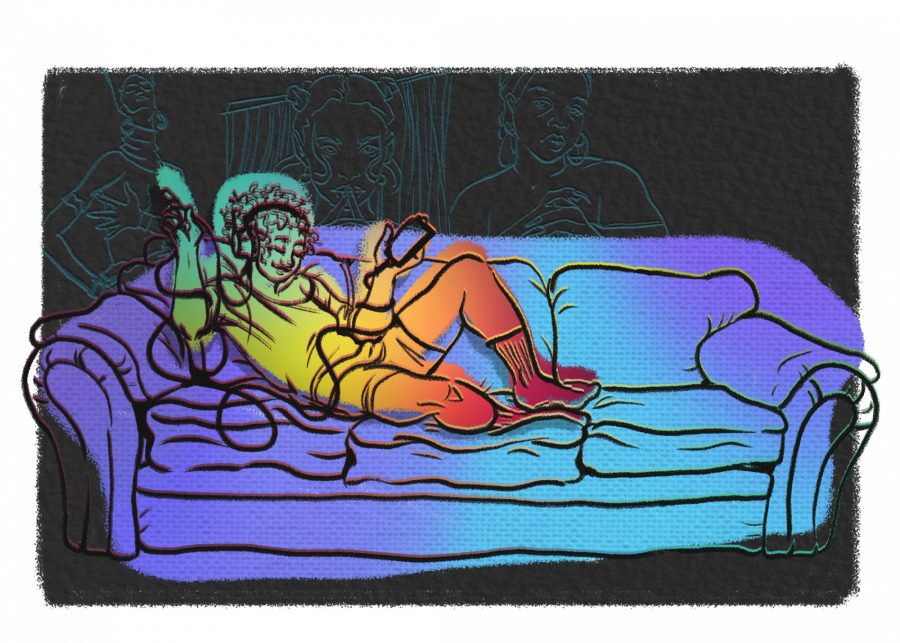 If your semester abroad in Paris got canceled, perhaps this French pop EP can fill the void. “La Vita Nuova,” Christine and the Queens’ EP, released in late February, teems with perfect melodies and synth. The EP perfectly blends irresistible funk with deeply personal lyrics.

“Invisible People” by Chicano Batman feels like the album the main character in a coming of age movie would begin their day with. From the foot-tapping opener “Color My Life,” to the piano-induced closer “Wounds,” this alternative album is the psychedelic lovechild of Still Woozy and Foster the People in all the right ways.

Chris Crack’s recent release, “White People Love Algorithms,” is the perfect escape from the seriousness of our days. With facetious track titles, like “Hoes at Trader Joes,” “Social Distancing” and “Epiphany’s Are Important,” any listener that comes across a few of Crack’s songs will be thoroughly impressed by the groove, verses and beats that follow.

“Don’t show up, don’t come out” is an anthem for the times. In Dua Lipa’s sophomore album, “Future Nostalgia,” Lipa makes music so groovy and vivacious that it simultaneously distracts us from our current moment while still reminding us to stay home.

In his sophomore album, “Grae,” Moses Sumney uses his voice to convey a level of intimacy many artists dare to achieve. And his silky smooth tone only elevates the lyrics and instrumentation that accompanies him on tracks like “Cut Me,” “Polly” and “Lucky Me.” Released in two parts, the album teems with pointed and vivid lyricism, like on “Polly” when he croons, “I want to be cotton candy / In the mouth of many a lover / Saccharine and slick technicolor / I’ll dissolve / I know that won’t solve this.”

5. “Set My Heart On Fire Immediately” by Perfume Genius

From the deliberate use of strings, drums and every instrument in between, “Set My Heart On Fire Immediately” by Perfume Genius is the pop/R&B album of your dreams. Notable songs on the sophomore album include “Without You” and “On the Floor,” songs fit for a sunny day and an ocean drive — or more realistically, a drive to the North Shore.

On “Forever, ya Girl,” KeiyaA’s voice, like the title of track 4, is heavenly. The smooth R&B melodies of the album create a medley of raw emotion. Notable listens include “I! Gits! Weary!” for its tranquil contemplations and “Rectifiya” for the cacophony of velvety instrumentation.

It is quite rare for an artist to discuss the flaws and excessive nature of Western culture with such intoxicating melodies and lyrics, but “XS,” Rina Sawayama’s most notable tune on her album, “SAWAYAMA,” achieves exactly that. Like the rest of her experimental tracks on this pop/punk album, “SAWAYAMA” is a close inspection of societal values delivered in a late ’90s, Britney Spears-shaped box.

“Fetch the Bolt Cutters,” Fiona Apple’s most recent release, is the album that the world was waiting for. Touching on partner mistreatment, mental health and the minutiae that too often goes unspoken in relationships, Apple brings these sentiments to the surface, and by doing so, establishes herself as one of the most profound artists of the decade.

1. “What’s Your Pleasure” by Jessie Ware

If “La Vita Nuova” transported us to France, then “What’s Your Pleasure” by Jessie Ware transports us straight to the disco. This album is an assortment of raw emotion, tongue-in-cheek lyricism and glittering melodies. The opening track “Spotlight,” a tour de force of romantic desperation and yearning to perpetually stay in a moment, is tantalizingly effervescent. Even if the only dance floor you’re grooving on these days is the one in your kitchen, “What’s Your Pleasure” is the perfect partner to your escapist disco party.