No room for racism in medicine: Students speak out against George Floyd memorial vandalism

While Daniel Michelson is not currently enrolled at the University, community members are calling for more action from the Medical School. 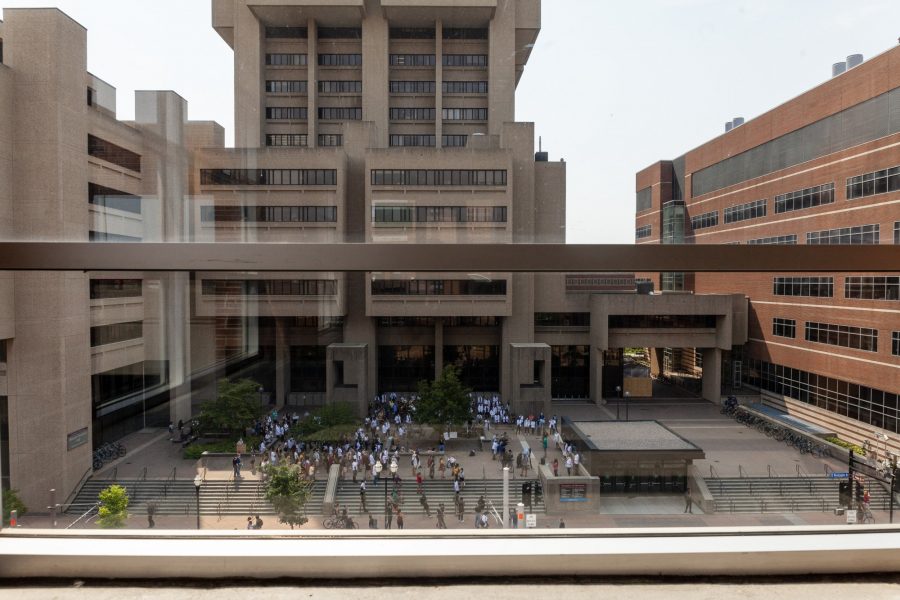 Hosted by the University chapter of White Coats for Black Lives (WCBL), medical students and other community members gathered for a socially distant protest outside of Moos Tower, the University’s landmark health sciences building.

The demonstration was dedicated to addressing racism in medicine — one of the main purposes of WCBL — while calling for the expulsion of Daniel Michelson, the fourth-year University medical student who vandalized Floyd’s memorial on Aug. 18.

“It is important for us to condemn something like this,” said first-year medical school student Seah Buttar. “But also to make sure that we are not allowing people like Daniel Michelson to be doctors and to be a person in a position of power, specifically, in a position of power that holds the choice of life in their hands.”

Medical students — many of whom have been active in protests and demonstrations against the police killing of George Floyd this summer — have written and signed a series of letters, petitions and emails appealing to University Medical School administrators to take a more active anti-racism stance on both issues.

WCBL president Dominique Earland said that talks with administration regarding curriculum and culture changes have been slow-going and haven’t yielded many tangible results. She and others say they hope the recent tragedies provoke real change.

“I think they realize that we aren’t going to let this go,” said Earland. “It’s kind of the continued narrative that we see from these demonstrations where we get great support from students and faculty of color, but when it comes to administration … they just aren’t there.” Currently, the University Medical School doesn’t require equity coursework to graduate. But, a University spokesperson said in a statement that the school encourages students to enroll in courses related to the health of communities with unique needs, like immigrants or the LGBTQ+ population.

In response to COVID-19, the school has added courses addressing health equity and racial disparities in health outcomes.

The medical school has recently hired its first vice dean for diversity, equity and inclusion, Ana Núňez, who will assume her role Aug. 31. Núňez will be tasked with helping the school address inequities and discrimination in its curriculum, recruitment and research.

Several individuals dedicated to anti-racism work from around the country have taken to writing their own letters or reaching out to the University Medical School, organizing under the hashtag #TakeHisWhiteCoat.

Originally from Ferguson, Missouri, Project Diversify Medicine founder Dr. Ashley Denmark watched her city burn for Michael Brown when she was in medical school. Now, she works to create a welcoming, more accessible avenue for students of color to explore the medical field.

Denmark said University Medical School students could feel limited in their advocacy due to a high-pressure career environment and mounting debt, which inspired her to reach out. She said she brought her large following from across social media platforms to help support Minnesota students.

“I understand the plight they’re in because in medical school, you don’t have a real voice,” she said. “I feel so proud about the University of Minnesota students, who were coming up and saying, ‘We’re going to take a stance against that.’ And so I’ve had to kind of bring my village, and we kind of work together to kind of shine a light in the dirt.”

“I think with my class, there’s just a lot of us that come from similar backgrounds with immigrant families or parents of color, or just somehow we’ve … gotten the short end of something,” said first-year medical school student Denise Quintanilla. “I think that’s really helped our class to say, ‘We demand better. This is unacceptable.’”