After George Floyd's killing by Minneapolis police, the streets around campus filled with students. But these student activists say they're not done yet. 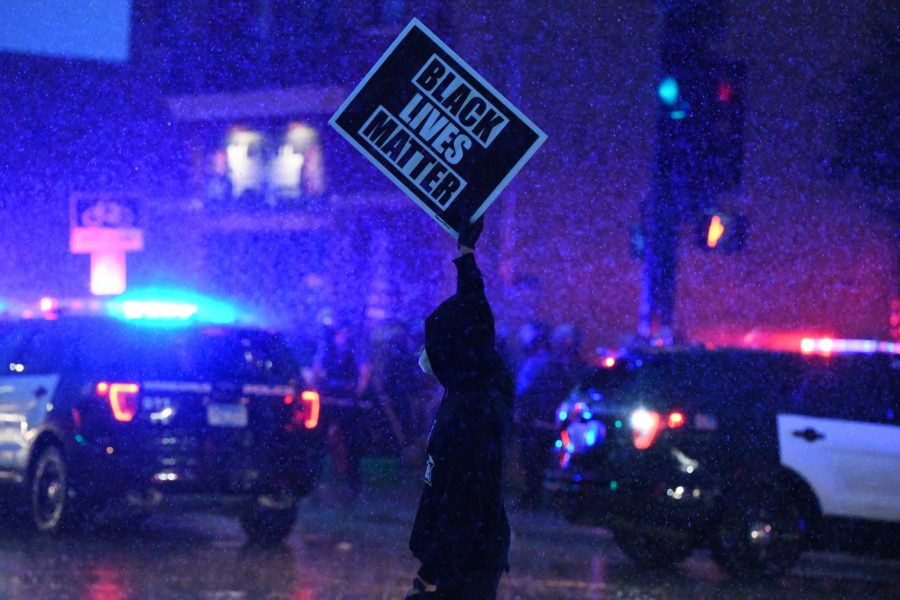 A protester holds up a Black Lives Matter sign in front of the Minneapolis 3rd Police Precinct on Minnehaha Avenue on Tuesday, May 26. The protest was in response to the killing of George Floyd.

Activists and supporters for social justice movements have shouted on the streets and across social media platforms over the last two months. As coverage of protests wanes, student activists continue to fight the good fight, determined to keep momentum going.

Student-led protests have been a staple of activism. In the month following George Floyd’s killing, high traffic areas around Dinkytown, East Bank campus and downtown were filled with University of Minnesota students holding signs and megaphones. Students also held demonstrations on President Gabel’s front lawn and in front of the University of Minnesota Police Department office.

Fourth-year student Alexa Koch has volunteered to help communities in need and now regularly attends protests around Minneapolis. She said she uses her voice and presence to uproot systemic racism.

“It’s critical that non-people of color are supporting them [Black people], uplifting them and listening to what they have to say,” she said.

Koch joined a small group of students and friends last week to hold a protest on Stone Arch Bridge.

The last large protest Koch said she attended was on July 25 in Northeast Minneapolis to “call out” Mayor Jacob Frey for approving the removal of Powderhorn Park encampments — where much of Minneapolis’ homeless population has found refuge since the beginning of quarantine.

According to Koch, social media has played a crucial role in keeping communities and activists informed. “A big source of information has been Instagram. I’m surrounded by a lot of people who are involved,” she said. “It helps with finding events and seeing where help is needed.”

Food and donation centers around the city are actively recruiting students as volunteers since some local grocery and convenience stores had to close their doors due to the protests.

“I have been volunteering a lot at food and supply donation spots, gathering supplies or helping hand out donations,” said Selma Erickson, a fourth-year student at the University.

“I’ve been collecting and purchasing gear for protesters of color to help protect [protesters] in the future,” he said.

While some have taken to social media expressing their disdain for growing antiracist movements, other students are refusing to let their voices go unheard.

“As someone who has always had privilege, I’m speaking out. People aren’t used to it, sadly,” said Anna Dillon, University of Minnesota fourth-year student who studies sociology. Although currently living at her parents’ house, hours away from Minneapolis, she has been able to attend protests in her hometown.

Dillon has seen students stand up for #BlackLivesMatter in the face of pushback. “There have been a lot of people my age protesting for Black Lives Matter, then across the street a bunch of ‘blue lives matter’ and Trump supporters,” she said.

The fight against social injustices is hardly silent.

“To propel the movement forward is crucial, and not running away from it when things get tough,” Erickson said.

Dillon believes an easy way for students to understand the importance behind social justice movements is by taking classes at the University that cover African American history, the African diaspora and sociology. “I think a big thing is educating others,” she said.

Many student groups have recently taken action in light of heightened awareness for #BlackLivesMatter activism, with plans to educate students on colonization within American history and how to be an ally.

“There are many ways to continue activists work, but it all starts within. Acknowledging your privileges and understanding them while also supporting those who are exploited and disregarded by a crooked system,” Ceesay said.