The move will impact both the women's and men's hockey teams at Minnesota. 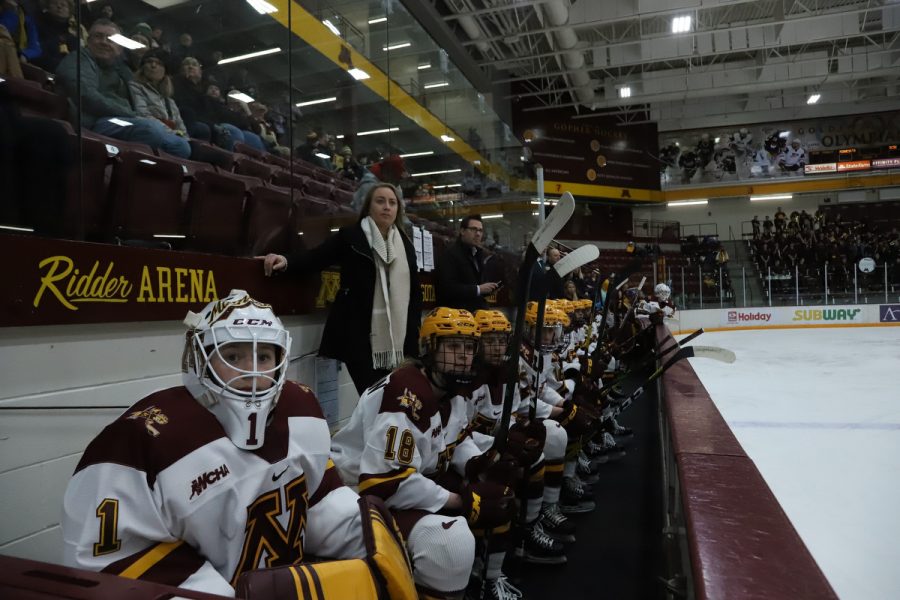 Members of the Gophers women's hockey team watch play from the bench at Ridder Arena on Friday, Feb. 28. The Gophers scored two power-play goals on the way to a 4-2 victory over St. Cloud State. (Jasmin Kemp / Minnesota Daily)

In a statement released Thursday, the Hockey Commissioners Association, (HCA) the group that represents all 11 conferences in college hockey, announced that the 2020-21 season would be delayed due to public health concerns relating to COVID-19.
In a statement, the HCA specified that while it was collaborating on its plans to return to play safely, conferences “will announce details on game schedules, including the start dates, individually.”
Bob Motzko and Brad Frost, head coaches of the men’s and women’s teams, respectively, also made statements following the announcement. Both coaches expressed that their student-athletes’ health and safety was a priority and that their teams would be ready to play when the season does start.
“Clearly everyone in college hockey wanted to be playing games next month, but we knew this delay was likely to happen and the health and safety of our student-athletes is what’s most important. We all believe there is a path forward and look for that to come soon. The good thing is that this delay will not affect our team’s preparation for when we do start the season. We’re confident that day will come, and we will be ready to compete when it does,” Motzko said in the statement.
This is a breaking news report. More information will be added as it becomes available.