Gophers’ Gable Steveson set to compete in Beat the Streets

The junior heavyweight is reportedly weighing around 260 pounds before he is set to wrestle Wisconsin’s Trent Hillger, an opponent who Steveson holds a 3-0 all-time record against. 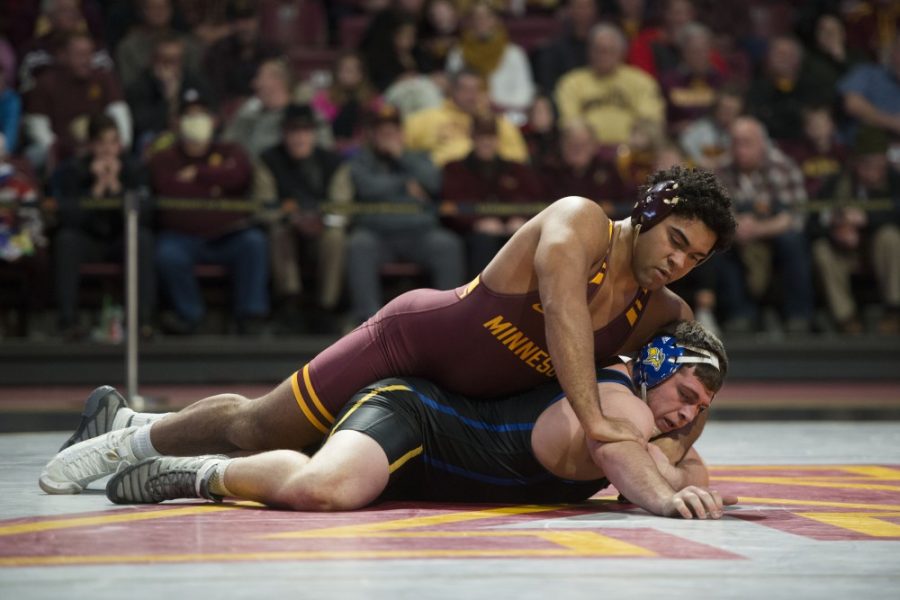 Freshman Gable Steveson at 197 competes during the match against South Dakota State on Sunday, Nov. 25 at Maturi Pavilion.

In late March, Gophers’ wrestling standout Gable Steveson was coming off of a Big Ten heavyweight championship victory and was preparing for the NCAA Championships where he would remain the No. 1 seed among heavyweights. Unfortunately, the entire world quickly flipped upside down, and like most people, Steveson did not know what his immediate future would entail.

After a five-month layoff of competitive wrestling, Steveson is set to compete in the 2020 Beat the Streets NYC virtual benefit on Thursday. The junior heavyweight is reportedly weighing around 260 pounds before he is set to wrestle Wisconsin’s Trent Hillger, an opponent who Steveson holds a 3-0 all-time record against. Although Steveson has experience against his opponent, he tries to enter each match with the same mindset.

“I really try to treat each opponent the same. He is a great opponent but I will just try to be myself and do what I do, and I think I will be successful,” Steveson said.

Hillger, a redshirt junior, has finished fourth in the last two Big Ten Championships within the heavyweight division and will be a great test for the Apple Valley, Minnesota native.

Steveson will have more to overcome than just his opponent. Beat the Streets is historically one of the more electric atmospheres in freestyle wrestling, but all six matches in this year’s event will be held outdoors without fans in an undisclosed location somewhere in the New York Tri-State area. The event is expected to begin at 5:30 p.m. Central Standard Time on Sept. 17, with the safety of the participants as the priority. Steveson told the Star Tribune he tested negative for COVID-19 before leaving the state and was tested again after landing in New York on Wednesday.

The event will also follow state and local health and government restrictions as well as the USA Wrestling Return to Events Guidelines.

Overall, the Minnesota heavyweight doesn’t seem too concerned about the altered atmosphere.

“It won’t really bother me. I go there to wrestle my match, and the fans come to watch. At the end of the day, my goal is to win my match and come back home,” Steveson said.

Gophers’ wrestling head coach Brandon Eggum couldn’t be more excited to see one of his own wrestlers compete in an event like Beat the Streets, as it historically showcases some of the best wrestling talents in the country.

“It’s always a positive to have one of your guys spotlighted in a big event like this because it really showcases your program and the University of Minnesota,” Eggum said.

Beat the Streets will be partnering with FloWrestling to showcase this year’s event fundraiser. The virtual telethon will include well-known coaches, athletes and celebrities, along with the six matches. This year’s event will make it 11 straight years of Beat the Streets showcasing a unique wrestling event that has raised millions of dollars in hopes of continuing the organization’s mission, to develop the full human and athletic potential of urban youth and to strengthen the wrestling culture within New York City.