McDonald's is set to return on the bottom floor of the complex. 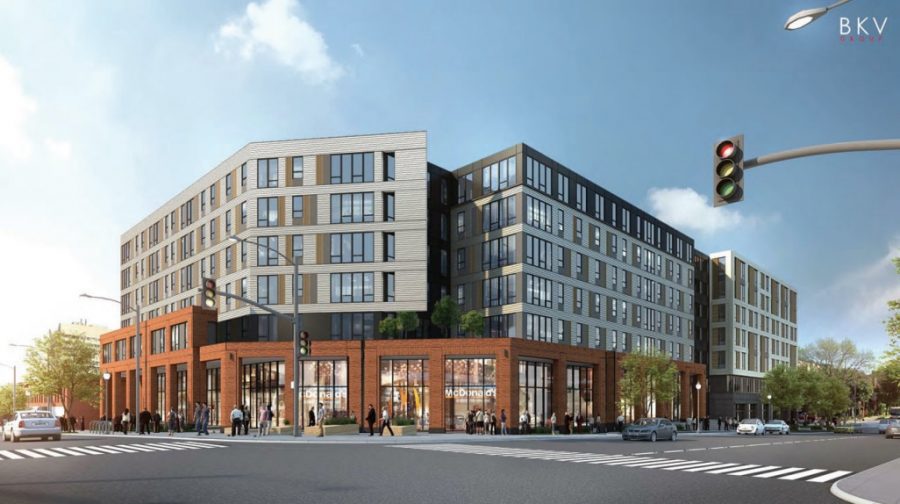 A proposed rendering of the Dinkytown McDonald's redevelopment.

After over two years of community engagement and careful planning, the housing development set to raze Dinkytown McDonald’s is moving forward — but with a few more changes.

The new structure, which would include seven stories of mixed-use housing with just over 300 units and 834 bedrooms, was approved by the Minneapolis Planning Commission on Sept. 8. It will eventually go to the City Council before construction is expected to be officially set into motion.

“[The project] will be moving forward without an anticipated problem with finalization,” said Chris Lautenschlager, executive director of the Marcy-Holmes Neighborhood Association.

CA Ventures, the developer in charge of the project, expanded the building’s footprint to three-fourths of the block from the previous one-half. It will encompass the corner of Fourth Street Southeast and Fifteenth Avenue Southeast, plus parts of Fifth Street.

This new plan includes redevelopment of the building that Pizza Hut, Subway and TCF Bank occupy, plus the Dinkytown McDonald’s, the Five Guys and Pagoda restaurants, Dinkytown Wine and Spirits and storage space owned by the Book House.

The housing structure, primarily catered toward students attending the University of Minnesota, was shortened due to community feedback. It will now be seven stories, but was initially proposed at 25 stories, then cut to ten.

The Dinkytown McDonald’s will be replaced with a new McDonald’s on the bottom floor of the complex.

The City Council stalled the project in Feb. 2020 due to the density of the apartment. Several appeals were filed at the time by community members over lack of minimum required parking spaces and the structure’s height. However, the deadline for appeals has now passed, with no clear objections to the development moving forward.

Despite many obstacles, Director of Development of CA Ventures Ryan Sadowy called the project a “flagship asset” for the company.

“It’s something that we can be very proud of,” Sadowy said. “Sometimes the hardest ones, though, are the most rewarding.”

Kristen Eide-Tollefson, owner of the Book House and member of the group Preserve Historic Dinkytown, said that while she is mostly content with the changes to the development plan, it is imperative that students living in the area are not taken advantage of with high prices and limited housing or retail options.

“The spirit of Dinkytown is not exploiting students,” Eide-Tollefson said, adding that the real “spirit of Dinkytown” is to “support and serve,” which is why one thing she would like to see is a grocery store.

Over the past two years, many students voiced their concerns about what would replace what many considered beloved Dinkytown staples, such as the liquor store and the McDonald’s. Some students pushed for a full grocery store to be made available in the neighborhood, citing worries about student food insecurity and lack of access to resources without transportation.

CA Ventures is trying to provide that, according to Sadowy, and has been trying to find a grocer interested in working with them for a significant amount of time.

Sadowy also said that the project is committed to affordability, not only for student housing, but also for retail, in order to promote and support small local businesses rather than larger chain companies.

“I think at the end of the day, that what we’re going to have out of [the project] is going to be well received from all, and that’s more important than a couple of sleepless nights,” Sadowy said.

Construction is expected to begin in summer of 2021.