After long hiatus, Gophers’ swim and dive is back in the pool

While the status of meets is still unknown, the Gophers’ swimming and diving teams are back in the pool and preparing for their next opportunity. 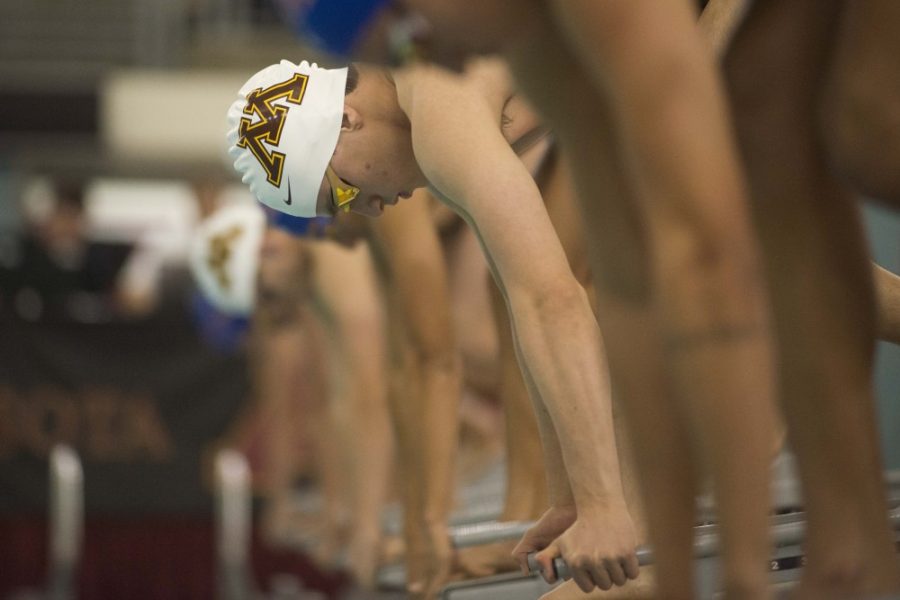 Evan Yoder prepares to enter the water to compete against the University of Florida at the Jean K. Freeman Aquatic Center on Friday, Oct. 11.

Like many collegiate athletics programs, the Minnesota swimming and diving teams were not immune to the effects COVID-19 had on sports competition.

That is why student-athletes are excited to be jumping back into the pool at the beginning of this fall semester as the teams have resumed practices once again.

“It just helps your mental state to stay focused and have a schedule,” senior captain Brittany Horn said. “It’s great to have the social interaction at the practice because these are my friends, my second family.”

Competition in the winter is looking more likely to happen as time progresses, but it still has been a long, challenging road to get to this point. Competition and training immediately halted with the spread of COVID-19, forcing some student-athletes to figure out what they should do and where they should go.

Senior captain Eitan Yudashkin of the men’s team was unable to go to his home country of Israel until the end of spring semester, so he had to arrange other plans that balanced training with staying safe as cases were rising in Israel.

“It still wasn’t normal training, but it was something more consistent and more close to [normal],” Yudashkin said. “That kind of helped me get back into things.”

When he got back to Minnesota in August, Yudashkin also joined a local club team with some others on the team to swim once a day as the Gophers were still unable to train together as a team. For Yudashkin and others, being able to have a fairly regular training routine again has been a blessing. Many of the student-athletes see it as a means of stress relief in addition to high-level competition.

“In late May, I got into one of the lakes to swim because it was warm enough, and I remember just having so much fun because I’ve been swimming consistently for 20 years, and it just became part of my life,” Yudashkin said.

On the women’s side, Horn is very thankful the team has been able to begin practicing with all of the student-athletes and coaches again but noted there are still noticeable differences — like starting practices later than usual and not having the incoming freshmen at the first practices.

“This year has been just so different for everyone, and we’re just really grateful to still have practice and be with one another,” Horn said. “I think that’s one of the things we tend to forget is there [are] parts to be thankful about.”

Horn has had a unique experience while at Minnesota. From Appleton North High School in Wisconsin, Horn was recruited to be a freestyle sprinter and backstroker for the Gophers. But once she got to the program, coaches began to notice she would be able to swim long distance races.

During the shortened season last winter, Horn recorded personal best times in the 500, 1000 and 1650 yard freestyle. She also continued to compete in the 100 yard backstroke. While Horn has enjoyed the transition, she said sprints will always have a special place in her heart.

At this point, the status of competitive meets has not been confirmed, but Horn and Yudashkin are hopeful meets will take place in January 2021.