Members of the University of Minnesota marching band reflect on highs and lows of virtual learning as in-person instruction resumes. 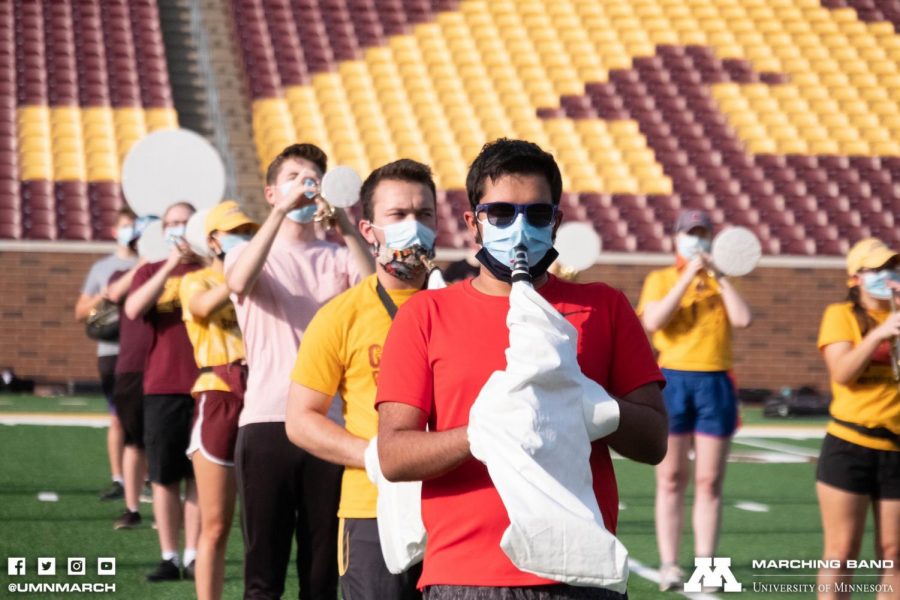 Photo Courtesy of the University of Minnesota Marching Band

Imagine all the facets of creating a new sports team — getting everyone acquainted, learning and practicing plays, forming a team dynamic. Now imagine trying to do all of that via Zoom.

Well, this year, that’s exactly what COVID-19 forced the University of Minnesota marching band to do.

Due to a Board of Regents’ decision in late August, the marching band played music, learned marches and created a community all online.

Band director Betsy McCann said that two days before the marching band was supposed to begin spat camp, the Board of Regents announced all undergraduate classes would be online for at least the first two weeks. McCann had one day to collaborate with student leaders about converting the in-person band boot camp to a virtual format.

Despite the quick switch, they were able to teach marching fundamentals and keep spirits high among students.

In those two weeks, members taught rookies the band basics, learned a pregame and halftime show and bonded over their mutual fatigue.

In order to make online learning easier for the 300-plus band members, leaders took advantage of breakout rooms.

During the Zoom rehearsals, which had been shortened to six hours, McCann said Mestelle or Gregg would teach a concept to the entire band, then move them into breakout rooms. In smaller groups, band leaders could give a more comprehensive explanation, allowing students to practice and receive feedback right away.

“It was so cool,” said Andrew Bremner, a first-year baritone player. “I felt like I improved and got a lot of useful information about music.”

After the virtual rehearsals, they had virtual hangouts.

“We’ve been having so many events in our free time and on the weekends that we never would have had if we were in person just because we would all be exhausted and busy all the time,” Mestelle said.

Across the band, there have been game nights, movie nights and meals with other sections.

Bremner said he appreciated these events as they helped him assimilate into the band.

“I got really accepted into the group right away,” he said. “I really didn’t feel a divide.”

Mestelle said she felt more connected to the band than in years prior because of their Zoom activities. She said normally she wouldn’t interact with people outside of her own section, but now she talks to them regularly.

Starting this week, the band resumed in-person instruction. McCann said she split the band into two performing groups. Each group will learn a pregame show and a halftime show. A video of each performance will be posted on Facebook later this semester.

She said members are marching six feet apart, have cut slits into their masks so they can play while wearing a mask and have special instrument covers.

While the marching band was able to accomplish its goals over Zoom, fourth-year mellophone team leader Molly Lampone says she’s ready to be back in person.

“It’s just a certain energy that comes when we’re all together,” she said. “This is like my family, my home.”