Katie Duong and Maya Kaperick, both native Oregonians, speak on their experiences with fires, air pollution and the realities of climate change. 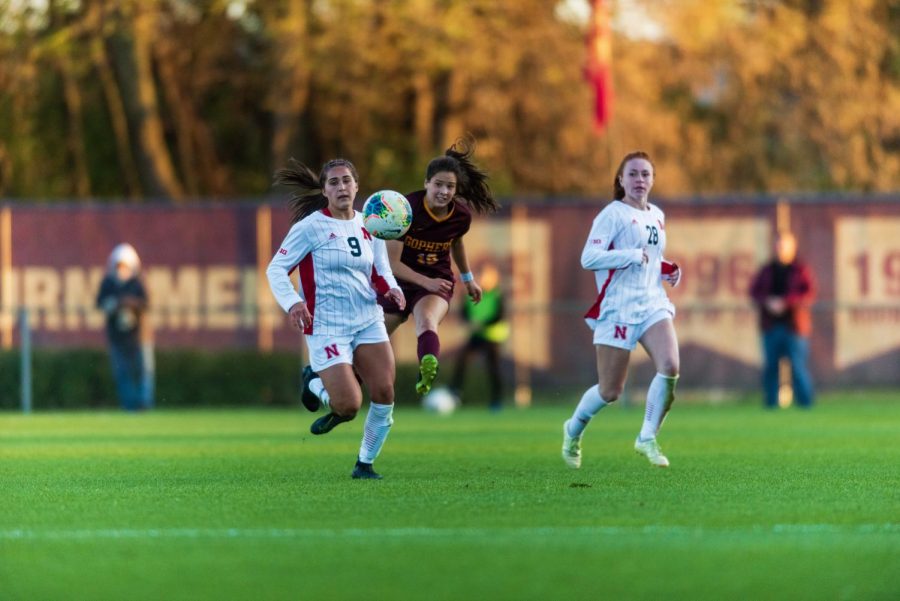 Gophers Midfielder Katie Duong launches a pass at Elizabeth Lyle Robbie Stadium on Thursday, Oct. 17. The Gophers went on to a tie game with Nebraska, 1-1.

Wildfires are something that many Minnesotans have little experience with, but for two Gophers’ student-athletes, the fires ravaging Oregon this summer hit close to home.

Katie Duong, a native of Portland and a midfielder on the soccer team, said this summer was worse than any other fire season she’d experienced in the past. Most years, the smoke that fills Portland’s air is what moves north from fires in California. Oregon typically doesn’t have long wildfire seasons the way California does, but a combination of drought, lightning and unusually high winds fueled fires that burned over a million acres and entire towns.

Portland and most of the coast was spared from the worst of the flames, but the smoke and ash from those fires polluted the air, with words like “hazardous” used by the Environmental Protection Agency to describe the unhealthy air. While Duong herself wasn’t home when the impact fully hit Portland, she said worrying for her family on top of starting school and athletics was a lot to juggle, and she was thankful that the worst of the smoke was clearing.

Duong said she feels the worsening fires in recent years were a symptom of climate change. For her, the solution to climate change is more based in collective action on the issue, and politicizing the issue or making it a matter of opinion is frustrating.

“I think climate change, obviously on a bigger scale, is something that to fix it we would need laws or the entire country working towards fixing … Just the past couple of years, it’s been kind of sad to see all of the places right next to me in Oregon and around the country get destroyed by these wildfires,” she said.

Climate change is also something that Maya Kaperick, a pole vaulter with the women’s track and field team, feels strongly about. Her hometown of Eugene is surrounded by national forests and more centrally located in the state, about 120 miles down the coast from Portland.

Knowing her family was safe aside from the poor air quality made it less stressful for her personally, but the news of what was going on in her home state was still a concern on a larger “climate level.”

“Because it wasn’t directly in our area — I knew my family was safe and things were going to be okay — I think it was more impactful to hear stories about people who are an hour north or south of us and who have nothing now,” Kaperick said. “So, to me, I think it was that I wanted to help, and I couldn’t really do that.”

As fires continue to raze towns and threaten larger urban areas in the future, Kaperick is also worried about rebuilding in fire-prone areas, which would cause an “endless cycle” of burning and rebuilding similar to what currently exists in areas of California.

That cycle has caused further problems. The New York Times reported that California, and other states affected by wildfires, must raise the price of regulated insurance prices to maintain a market for insurance companies or end up with areas of land that are uninsurable because those companies refuse to insure entire areas of at-risk land.

“This isn’t just climate change; it’s kind of a systemic issue of both bureaucracy and kind of government influence, which doesn’t necessarily help the people trying to survive,” Kaperick said.

Kaperick also mentioned that there are many charities and fundraisers for people impacted by the fires, and a compiled list of GoFundMe fundraisers can be found here.