Flip the Script Fest, coming this weekend, is leaving Hollywood's stereotypical tropes behind and spotlighting queer people as the main characters. 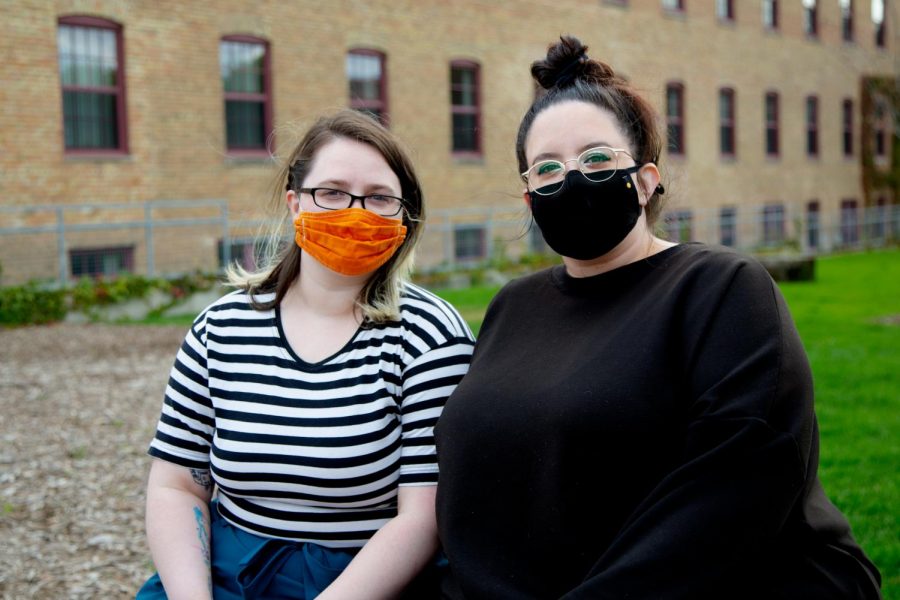 From left, Flip the Script Fest founders Mara Emmons and Victoria Carpenter pose for a portrait outside Victoria's St. Paul apartment on Tuesday, Sep. 29. The film festival celebrating queer representation with a multitude of short and feature length films will run virtually on Oct. 2-3.

Accurate representations of queer identities are hard to find in modern films. But two Minneapolis artists are setting out to flip the script about queer idenities with a weekend-long queer film festival.

“Flip the Script Fest,” a two-day virtual film festival, is coming this weekend, Oct. 2 and 3. The festival will flip Hollywood’s stereotypical queer narratives 180 degrees with 28 short and feature-length films with multi-faceted, queer representation.

“An ode to the name of the festival, ‘Flip the Script’ — it’s very important for us to take the people on the bottom and put them on the top as far as the spotlight goes,” said Victoria Carpenter, a co-creator of the festival.

She and Mara Emmons, both local artists, are responsible for the festival’s creation. They originally met three years ago at the Minneapolis International Film Festival and quickly became friends, bonding over their mutual aspirations for hosting a film festival that steered far from the heterosexual focus of mainstream media. They initially planned to hold the festival at Minneapolis’ St. Anthony Main Theatre. Funding for the festival came from the Minnesota Metropolitan Regional Arts Council and the organization Springboard for the Arts.

“We’re very queer and we really want queer films, but we kept finding like nothing or a stereotype,” Emmons said. “Especially in the film fest genre, there’s a lot of tragedy — or there’s a queer side character.”

The creators aim to especially focus the festival on transgender and non-white characters.

“You feel there is a gap, and you can see there is a gap; but once you start quantifying it, it’s pretty wild. For instance, a GLAAD’s studio responsibility report from 2019 said that in [2018], out of 110 major studio films created only 20 of them have any LGBTQ characters in them,” Carpenter said. “You can assume they were not main characters.”

In an effort to include different perspectives into the festival’s planning, the creators developed an advisory committee. The committee helped with research and decided what necessary aspects and identities the festival should showcase. Members of the committee were acquaintances and friends of the creators with experience in the film industry.

“The emphasis on looking at the full spectrum of diversity in the LGBTQ community is … exactly what I needed to hear out of a film festival,” said Denzel Belin, a Minneapolis-based film director and member of the festival’s advisory committee.

Originally, Belin didn’t think he would be able to attend the festival because he worked weekends. But since the festival is a livestream, Belin and many others now have the opportunity to attend.

Both individual movie tickets and all-access weekend pass tickets are available. Donations are also accepted, and film-lovers can pay it forward to help buy others tickets. The creators want to make the film festival fully inclusive for everyone who wants to attend, so they’ve decided to allow attendees the option of emailing them for a free ticket.

Almost all of the films are available to stream from anywhere in the world, except for the feature-length film “Venus,” which is only streamable in Minnesota.

While putting this first festival together is a dream come true, according to Emmons, this festival might only be the beginning.

“The dream of dreams was to make these types of festivals that were for many different marginalized communities and identities — to be able to have the resources to hire and help make other festivals for other marginalized identities.”