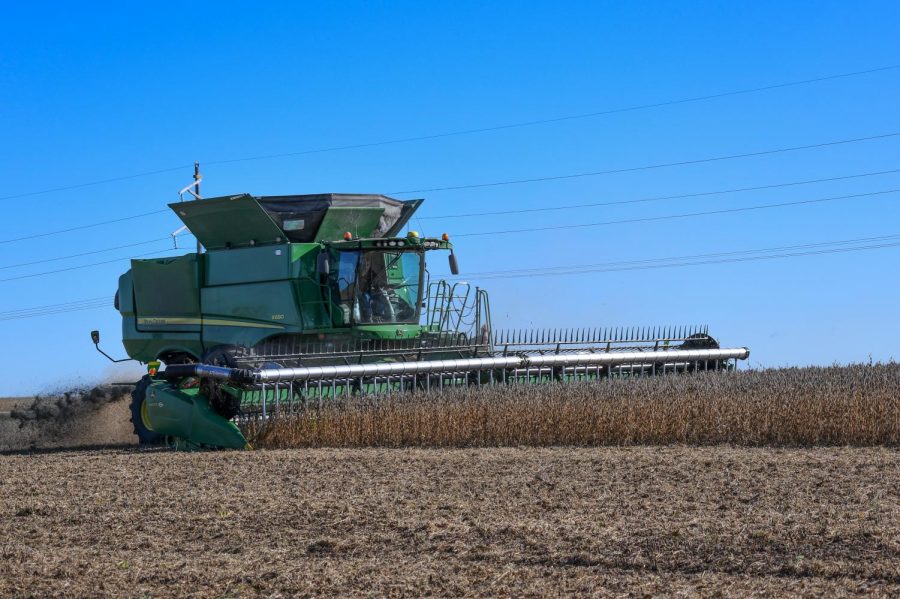 A combine harvests crops in Madison Lake on Wednesday, Sep. 30. University researchers are conducting research on alternative methods for applying fertilizers to crops in response to new challenges presented by climate change.

Now in the third year of their research, University of Minnesota soil scientists are experimenting with manure application to help farmers navigate the effects of the climate crisis.

Due to changing weather patterns, farmers have been seeing wetter growing seasons, which has made it difficult to plant and fertilize their crops as normal. If crops are fertilized too early, excessive rain can cause fertilizer to run off the field and enter streams, lakes and waterways and even leach into the groundwater. To give farmers more opportunity to plant, researchers are experimenting with the timing of fertilizer application.

The whole project started because of an important need to use nitrogen efficiently, said Fabián Fernández, a University researcher on the project.

The success of planting is dependent on many different factors, which vary depending on the field, said David Kee, the director of research for the Minnesota Soybean Research and Promotion Council, which funded some of the initial stages of the project.

“We call it ‘the four R’s,’” Kee said. “The right rate, the right place, the right nutrients and the right time.”

Typically, farmers apply nutrients to their crops — in the form of manure or synthetic fertilizer, both of which contain nitrogen — during the fall or spring, he said. But, because the weather has been getting wetter, it has become more challenging to apply manure. Applying it too early could risk the crops not absorbing the nutrients in time and the fertilizer being washed away. Applying it too late could risk a smaller crop yield as the plants will not have enough nutrients to flourish.

Kee said loss of nutrients is not only bad for the environment and the health of the crops themselves, it also impacts a farmer’s profitability. Any fertilizer that does not reach the plant’s roots is a lost investment, he said.

Since COVID-19 hit in March, farmers have had fewer vendors and lower demand for their crops, especially with the closure of many restaurants and other normal suppliers. Even before the pandemic, weather disasters, trade wars and low crop commodity prices have plagued the farming industry. With farmers already on a tight budget, using expensive fertilizer efficiently is everything.

Logistics of the research

Melissa Wilson, the principal investigator of the project, said her team is looking to widen the window of opportunity for farmers to apply manure amid wetter growing seasons.

“Especially in a cold climate like Minnesota — you only have so many days that are good growing … and planting late can be really problematic for yields,” Wilson said. “So having one less thing to do in the spring, like if you could wait to apply your manure, could be beneficial.”

Part of the team’s experiments have been looking into dispensing liquid swine manure between rows of corn— which is referred to as “sidedressing.” This tactic is unique because it applies nutrients to crops that are already in their growing stage, which makes them more likely to absorb nutrients and prevent erosion if conditions are wet.

Manure consists primarily of animal feces and urine, whereas synthetic fertilizers contain many of the same nutrients, but they are human-made. Wilson said synthetic fertilizer is most commonly used among farmers, and between 25-40% of farm acreage uses manure.

Wilson said many farmers, especially those who own livestock and need to dispose of livestock waste, could benefit from manure application. Manure contains organic matter not present in chemical fertilizers, which encourages microbial growth in the soil and improves water retention.

“We kind of say that commercial fertilizers are meant to feed the plant. But the manure feeds the soil, which then helps feed the plants,” she said.

Chris Pfarr, a former graduate assistant on the project, said there are two ways to apply manure: either through a dragline hose or a tanker. A dragline hose is attached to a pump filled with manure and is typically dragged behind a tractor. A tanker, on the other hand, is pulled like a wagon behind a tractor and discharges manure from a smaller series of hoses.

Dragline hoses often run over the corn, which if run too late in the season can damage crops beyond recovery. Alternatively, tankers run along the spaces between rows of corn, which means they can apply the manure later in the season when crops are taller without damaging them.

Their recent experiments with tankers suggest that with this method farmers can still plant their seeds at the ideal seasonal time and apply fertilizer later when the ground is less wet.

Another important aspect of their research is reducing pollution caused by excess nitrogen, the most important nutrient in manure and fertilizer that is absorbed by plants.

If nitrogen is not taken in by the plants, it can be lost to the environment. Under wet conditions, nitrogen can turn into a greenhouse gas. As water moves through the soil, water can also pick up nitrate and carry it away, contributing to runoff that negatively impacts lakes, rivers and streams. Excess nitrogen in water causes algae to grow faster than ecosystems can handle, which depletes oxygen in the water that other fish and plants need to survive.

If nitrate leaches below the roots of plants, it can contaminate groundwater too, which has shown to have effects on human health. Nitrate ingestion can lead to birth defects and increase the risk of specific cancers in adults.

“If we’re going to be sustainable farmers, we want to be able to be environmentally sustainable, but also maximize yields for food production,” said Pfarr, whose family farm was used as the base for the experiments in the study. “It’ll be especially important with the changing weather [to be] more efficient with what we have.”