A local television station hosts weekly outdoor concert series set atop a one of a kind van, cruising around Northeast Minneapolis. 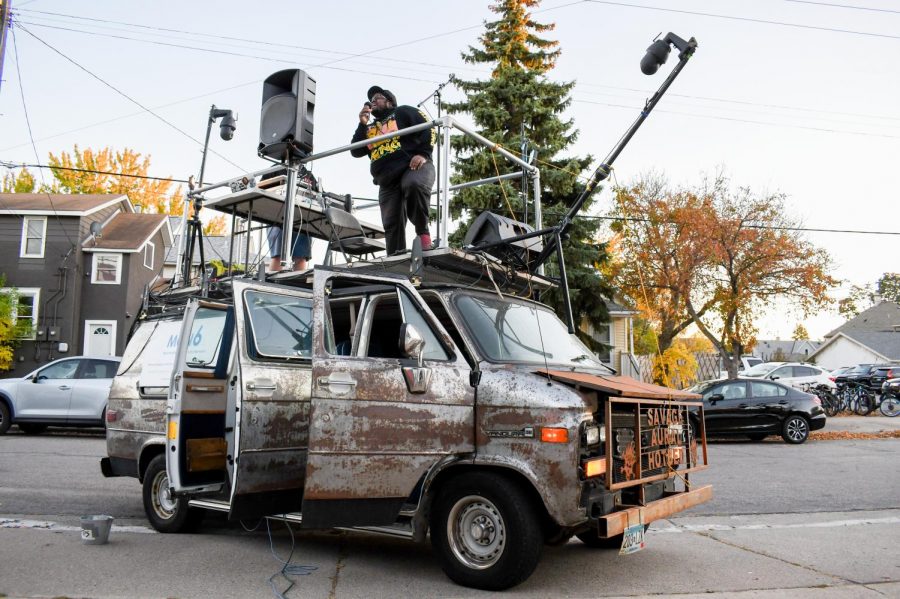 Musical Artist NUR-D performs as part of MCN6’s “Bands on Vans” series at Grumpy’s Bar on Saturday, Oct. 10. The series features local artists while driving from Grumpy’s Bar to the 331 Club.

This is what came to mind for local rapper NUR-D when describing his most recent performance atop a decked out 1992 GMC Vandura.

Complete with a fully functioning PA system, a 5-by-11 foot wooden platform stage and cruising at a cautious speed of 5 mph, NUR-D, known off stage as Matt Allen, was more excited than nervous to get the chance to test out the rolling venue.

“I loved the idea of just rocking out on top of a van,” Allen said. “I was like, ‘Are we gonna be driving down the highway like what’s the situation?’ I’m down to try whatever, I just wanted to make sure I wasn’t gonna fly off.”

NUR-D was the third performer in a new concert series aptly titled “Bands on Vans.” This series runs weekly shows every Saturday in October with a plethora of different acts and artists. Shows begin at 6 p.m. outside of Grumpy’s Northeast before taking things to the road. Halfway through the show, the trusty music-mobile slowly makes its way along the half-mile stretch of road to the 331 Club, where the performers kick off a second set.

The event is hosted and produced by community television network MCN6. Fresh off the launch of their new Minnesota music channel for the Roku app, the station has been hosting weekly livestreams broadcasting the Bands on Vans performances to their new channel and social media.

MCN6 marketing and production specialist Corinne Caouette talked about how many musicians and bands have been forced to turn to live-streaming due to the lack of live performances, and how many have struggled with it as a medium.

“There’s so many glitches and so many things, hiccups you come into technically that I think a lot of bands are really turned off to dealing with it, even though they want to try,” Caouette said. “But, you know, Stuart [the station director at MCN6] has the technical knowledge and a team that’s willing to go for it and make it happen.”

Next week’s featured artist is local musician, Athereal Rose, who will be taking the not-so-stationary stage Saturday, Oct. 17th. After having had her tour canceled back in February due to COVID-19 closures, she made sure to arrange big plans for her return to live performance.

“I’m dying to play a show,” Rose said. “In my second set, I am actually featuring six different feature artists. I have a backup vocalist, I have someone who does interpretive dance, I have a contortionist, I have someone who’s hooping. I tried to make it special, since it’s my first show back in Minnesota since my botched tour.”

The team at MCN6 has made a point to remind audience members to adhere to social distancing and to wear masks while in attendance.

“People were playing it safe for the most part, you know there were a few drunk people toward the end of the night that we had to be like, ‘Social distance! Wear a mask,’ but for the most part. people were respectful,” Caouette said.

The act set for Saturday the 24th is local Soul and R&B musician Krysta Rayford, who goes by K. Raydio. Rayford sees the Bands on Vans event, along with the resurgence of live performances everywhere, as positive and important spaces for people to come together as a community to celebrate art.

“I just want to say that, you know, I’m from the south side of Minneapolis, I’ve performed here for 10 years now and I think what is so unique and wonderful about the Twin Cities music community is moments like this, where people come together, not only to assist the performing artists, but to also really be there for their community,” Rayford said.

“It just really feels cool to be a part of something that’s much more about lifting the spirits of everyone right now and I think Minneapolis, truly needs to feel like we have things to look forward to and we can support one another through the arts. I think music is more important now than it has been for a very, very long time.”