There are two questions on the Minneapolis ballot. Here’s what you need to know about them

The Minneapolis ballot will feature two questions related to the city’s charter. Police reform will not be on the ballot. 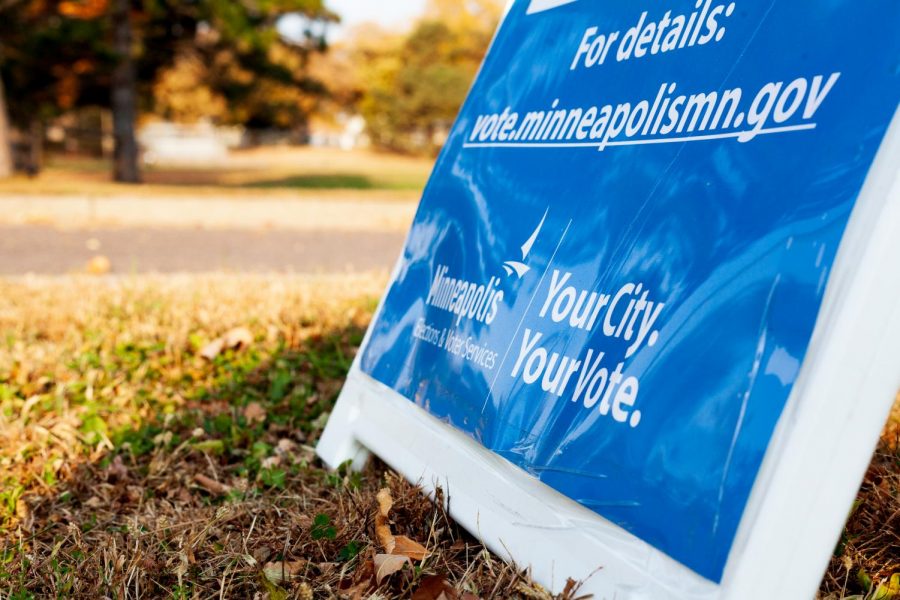 A sign announces a ballot drop-off location in the parking lot of Bossen Field Park, in South Minneapolis, on Saturday, Oct. 10. On the ballot, alongside a number of national, state, and local elections, are two important questions regarding the city of Minneapolis.

“Shall the Minneapolis City Charter be amended to allow ward and park district boundaries to be reestablished in a year ending in 1 and to allow the use of those new boundaries for elections in that same year; to allow ward and district boundaries to be modified after the legislature has been redistricted to establish City precinct boundaries; to prove that an election for a Council Member office required by the Minnesota law in a year ending in 2 or 3 after a redistricting shall be for a single 2-year term; and to clarify that a regular election means a regular general election?”

There are a couple of parts to this question, let’s break it down.

Cities are required to redraw their council ward boundaries within two years after the census count, which happens every 10 years, regardless of the voting cycle.

The Kahn Rule, named after former DFL state Rep. Phyllis Kahn, requires Minneapolis to hold City Council elections as soon as possible after the cities redraw their districts following the census — even if it cuts into a four-year term. The goal of the law was to limit how much time a council member could represent a district after their demographics changed.

This question is proposing that, rather than running for a four-year term in 2021, candidates run for two two-year terms in 2021 and 2023. Following the establishment of new city boundaries, a four-year term election in 2025 would take place.

In other words, if approved: After the census redistricting, Council members would run for two two-year terms and then back to two four-year terms.And if it doesn’t pass: Council elections will not always match with other city elections and will continue as they are. The Star Tribune reports that this could lead to questions of state law competing with local law.

Why is this question on the ballot?

If the majority of voters were to say “yes” to this question, it would save the city money for carrying out multiple elections.

The ballot would also continue to be unified, meaning the City Council, the mayor, the Board of Estimate and Taxation, and the Minneapolis Park and Recreation Board would be elected at the same time. If approved, it could help the city avoid a “council-only” election and constant elections where voter turnout could drop.

Currently, the city charter calls for a special election to be held within 90 days of a council seat or mayoral vacancy.
If this measure passes, the city charter would be amended to follow state law, requiring special elections following Council and mayoral vacancies to take place on designated election days more than 90 days after the seat opens.

These election days include the second Tuesday in February, April and May, the Aug. 11 primary election day and the Nov. 11 general election day.

If not passed, Minneapolis may hold an election following a vacancy on any day the city designates. This could result in lower voter participation due to a tighter timeline.

No, the ballot will not feature any questions regarding the police reform.

The Minneapolis Charter Commission — an unelected group of 15 people — shot down the proposal in August.
The city charter currently mandates about 8.5 police officers for every 5,000 residents. The commission has decided to take further time to review the amendment, meaning there was not enough time for the amendment to reach the ballot in November.

The move has drawn criticism from some community members and City Council members, including Council President Lisa Bender.

The Charter Commission’s vote is disappointing and creates barriers to change but it will not stop our work to re-imagine public safety in Mpls. Our work always was and remains multi-pronged, including a 911 workgroup, MPD staffing study, investment in violence prevention & more.

Correction: A previous version of this story incorrectly stated how many police officers are mandated by the Minneapolis charter.