The University president also discussed the status of the University’s finances and student tuition. 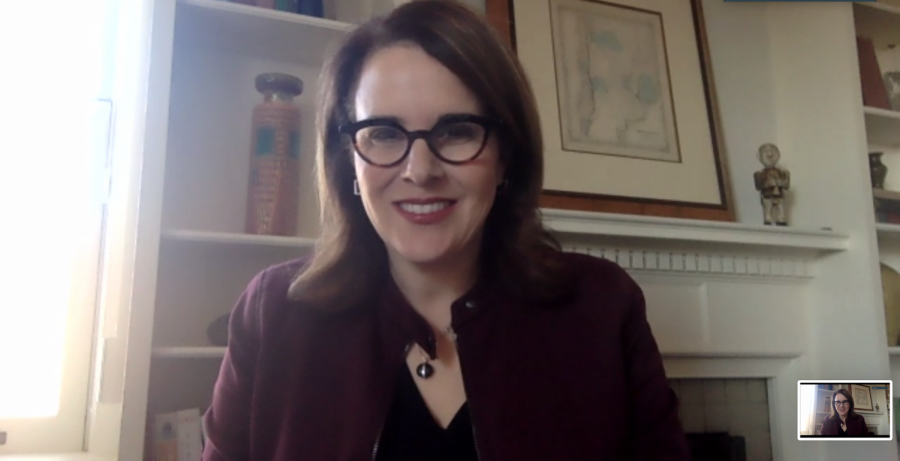 President Joan Gabel poses for a portrait over Zoom on Thursday, Oct. 15.

University of Minnesota President Joan Gabel discussed COVID-19 testing, plans for the spring semester and finances in a virtual interview with the Minnesota Daily.

The University recently approved the purchase of 66,000 COVID-19 saliva testing kits, supplemental to the MTest Program. As part of the program, each student will receive one testing kit to use at their discretion. What contributed to the decision to expand testing? Will these testing numbers be included in the University’s COVID-19 dashboard?

“The results will be included in the dashboard. The governor very graciously offered to expand his testing support for K-12 faculty, teachers and staff, to our faculty and staff. So that is covered largely by CARES [Coronavirus Aid, Relief and Economic Security Act] funding and then if individual students have insurance.”

To purchase these tests, the University will have to pay more than $8 million to Vault Health. How is the University balancing the need for testing and safety with the need to be financially responsible?

“I should mention that the saliva test for students is being paid for by the University. [For] faculty and staff, we have the support of the state … But what we’re doing is we have taken other cuts, faculty and staff have voluntarily taken a pay cut, I took a pay cut, the highest earners are taking the largest cuts. We have some savings because we’re not as open as we were before. So for example, some of our travel … hosting events, serving food, things that we would just normally do as part of our operations aren’t happening.”

You announced earlier this week that the University would be moving to step three of the Maroon and Gold Sunrise Plan. Students in residence halls now have the ability to move more freely around campus and have a required back home time of midnight instead of 9 p.m. How did you and administration decide this was the right decision? Were student violations of the restrictions taken into account?

“Yes, so student violations are taken into account. For privacy reasons, we can’t say what we did with the violations that we were aware of, except to say that, for the ones we are aware of, we are taking appropriate action.

“Our [COVID-19] numbers were not zero, it would be the goal for them to be zero, but they were within the projection that would allow us to feel comfortable. But we are watching very closely that all around us the numbers are going up, our numbers are going down, but around us, numbers are going up, and there are no barriers between the outside community and us, ultimately. Our hope is that we can stay at step three, or maybe even go to step four, but it could be through no fault of the students that we would have to wind back if the community numbers go up high enough.”

Epidemiologists have talked about a collective anxiety of college students heading back home to see their families for Thanksgiving and then infecting them. What responsibility, if any, does the University have to prevent those infections?

“We don’t really have the ability to force students not to travel, it’s not within our authority to do so. So instead, what we intend to do is give a lot of information about how students can be as safe as possible when they do travel. When we get closer to those dates, we will encourage students to think about saving their [saliva] test [until Thanksgiving] if they have not needed to take an M Test, meaning they were not symptomatic or exposed.”

It was recently announced that instructors would have the ability to choose their course modalities for the spring semester. They were asked to decide this by Oct. 2. As of now, what course modalities are being chosen most frequently by professors?

“We don’t have the numbers yet; our projection is that spring will look a lot like fall in the mix of the portfolio. We do have the good news of knowing that transmission really did not happen in classrooms and that the measures we were taking in terms of social distancing, mask policy and just compliance with all of the public health standards that we’ve come to know so well, were working in classrooms and labs.

“Our hope is that that means that we can fill all the capacity that we have for face-to-face instruction. But I think it’s very important that faculty have the choice, that students have the choice and that as much as possible staff have the choice to work in the way that makes the most sense for them.”

At the October Board of Regents meeting last week, you presented several proposals for budgets that would take effect in the near future. How is the University preparing for continued financial instability during the COVID-19 pandemic?

“I mean, everybody can feel that the financial challenges are ongoing, but we don’t know their full extent. We don’t want to cut into the mission of the institution prematurely, so we’re in this interesting planning period where we have multiple contingencies.

What role will student tuition play in financing the University in the future?

“It’s hard to know that for sure, right now. It was tough financially to hold tuition flat, it was an easy decision because it was very clear that we needed to provide that certainty to students, but it was a very expensive decision, obviously. And it’s very hard to be certain of where that looks going forward.

“It will become part of our very transparent consultation budget process that ultimately is approved by the board. So it won’t come out of left field when we ultimately make the decision. Everyone will know where we’re coming from, and we’ll have a full opportunity to comment.”

As we approach the midpoint of the semester, what are the top priorities for the University between now and the end of the term?

“Well, we are very keen on keeping things safe, we want to make sure that we don’t have a surge or a cluster, or a surge in our transmission rate. So that is the dominant goal, to get to Thanksgiving and keep our community well.

“We’re continuing to work on our equity, inclusion and diversity mandates through the strategic plan. The most visible attribute of that work is having Dr. Cedric Alexander on campus doing his safety facilitation and review. We’re just so grateful that people are willing to make the sacrifices that they’re making, so that we can be at this point and be making our plans for the second half of the semester.”