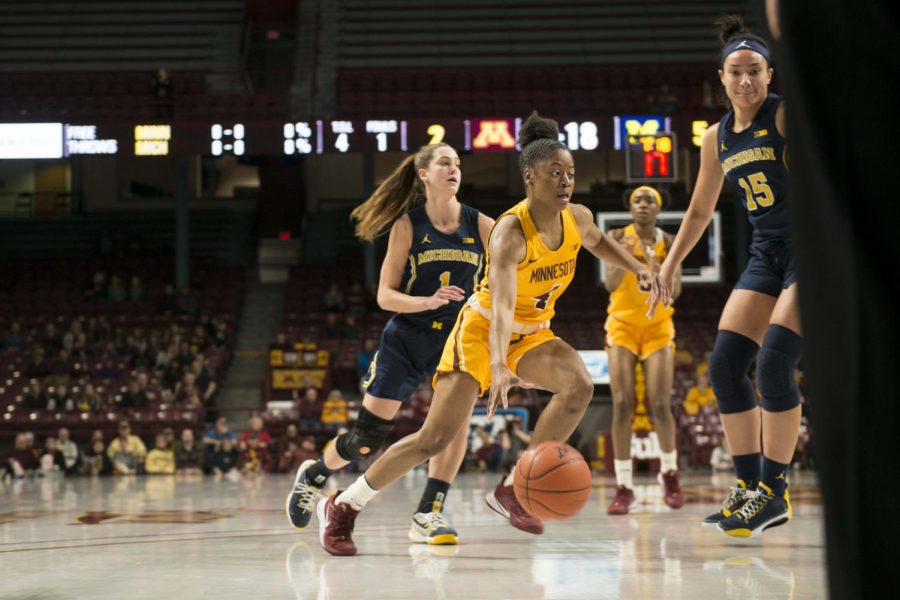 The Gophers’ women’s basketball team will be without 49.1% of its scoring from a season ago. Head coach Lindsay Whalen will have to rely on a large portion of her team’s youth, with very few upperclassmen returning from last year’s squad.

Keep an eye out for sophomore guard Jasmine Powell to have a much-expanded role this season. As a freshman, Powell led the team with 375 points and 96 assists and was second in points per game behind Destiny Pitts who transferred. Powell averaged 12.1 points per game, while only playing 26.1 minutes per game.

Jasmine Powell, better known as “Jazz,” is a 5-foot-6 guard from Detroit, Michigan. She came to the Twin Cities as a four-star recruit, the No. 78 overall player and No. 23 ranked point guard in the class of 2019. She led her high school, Detroit Country Day, to back-to-back state championships in 2017 and 2018. Powell averaged 18.4 points, 8.0 assists and 5.7 rebounds in her senior season.

When choosing the University of Minnesota, Powell had her long-term future in mind, and she saw the opportunities Whalen and the Gophers presented.

“It mainly had to do with my personal goals, which are to win an NCAA championship and eventually go to the WNBA,” Powell told Gopher Sports last season. “I just felt like Coach Lindsay was the person that could do that for me, especially with her background of playing in the WNBA and since I’m a point guard. I just felt like that connection would be there, as well.”

Powell found immediate success in her Gophers career, as she put together one of the most successful freshman campaigns in Gophers history. She was voted as a 2020 Consensus All-Big Ten Honorable Mention as well as a consensus member of the Big Ten All-Freshman Team.

The Detroit native ranks fourth all-time among Minnesota freshmen in free throws made, 99, and assists, 96. She also led all Big Ten freshmen with 12.1 points per game as well as free throw percentage, shooting 75.6% from the line.

She even led Big Ten freshmen in scoring in conference games, 13.1, while becoming the first freshman in program history to lead the team in assists.

Moving into this upcoming season, the sophomore guard has one goal in mind: improvement.

“I think it started with conditioning because I want to be able to impact the game on both ends of the court whenever my team needs me. And lately it has been the whole game, so I want to be in shape,” Powell said.

When looking at the aspects of her game on the court specifically, the right-handed guard wanted to become a more rounded player.

“I have been working on my pull-up [jump shot], ultimately going left as well, so I can be stronger on both sides of the floor. Last year I went right a lot, so I am looking to incorporate going left as well.”

With COVID-19 impacting the season so much already, Powell has not been able to have a traditional offseason to prepare for her expanded role. The Gophers have yet to officially confirm a single date for a game, with the season less than a month away. The only date currently set in stone is that the 2020-21 season will officially begin on Nov. 25.

Powell will likely have fellow sophomore guard Sara Scalia right by her side all season, as she too is likely to play a large role this season. Whalen couldn’t be happier to have both players on her team.

“You’re proud as a coach,” Whalen said. “You’re happy they’re on your team.”