Men’s hockey announces schedule for first half of season

The eight game schedule will have the Gophers playing at home for all four November games. 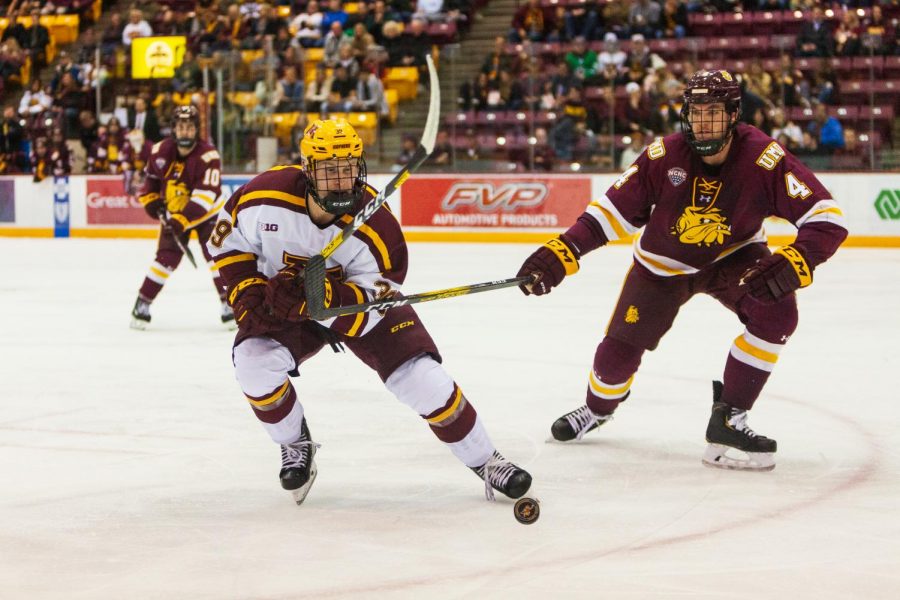 Gophers Forward Ben Meyers chases the puck in the 3M Arena on Friday, Oct. 25. The Gophers went on to lose 2-5 to the University of Minnesota - Duluth.

At long last, the schedules for Big Ten hockey have finally been released. Well, half of the season, anyway.

The Big Ten will announce plans for the second half of the season as well as dates for the Big Ten Tournament at a later date, likely to monitor the possible spread of COVID-19 and react accordingly to avoid any coronavirus-related disruptions like those impacting the Big Ten football schedule.

Minnesota will kick off its 100th season with a double header against Penn State on Nov. 19-20. The schedule does not yet include specific start times or information on where fans will be able to watch the games, but the announcement is still exciting for the players.

Other games announced include Ohio State, Michigan State and Michigan in the weeks following the season-opener against Penn State.

Forward Sammy Walker said that the anticipation for this season was unlike any other year.

“It’s great to finally have a date to circle on the calendar after waiting so long to hear about the season…I don’t think any of us have ever had so much anticipation going into a season as we have for this one. We’re ready to go,” Walker said in a press release.