The Gophers have finally earned a win, playing much improved defense and balanced offense in a 41-14 route of Illinois. 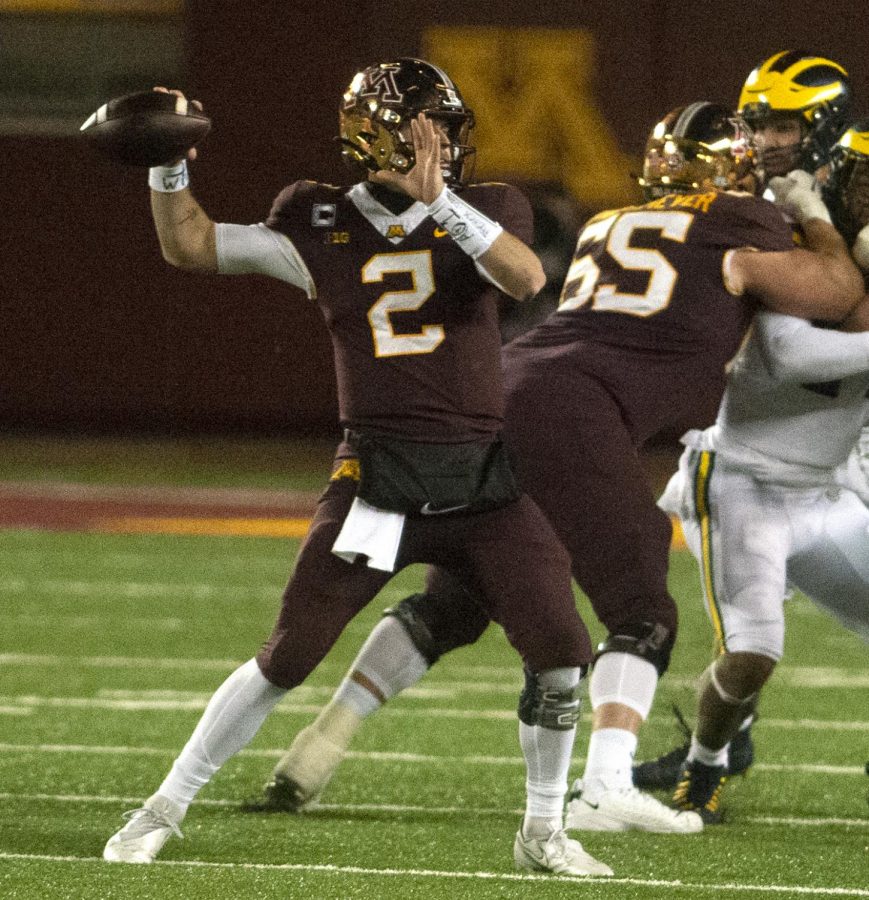 Gophers quarterback Tanner Morgan prepares to launch a pass at TCF Bank Stadium on Saturday, Oct. 24. Minnesota fell to Michigan 49-24 in their first showing of the season.

After failing to find the win column in the first two weeks of the season, Minnesota snapped its early losing streak in a 41-14 win against Illinois.

The Gophers’ offense had little trouble moving the football down the field on Saturday, finishing with 556 total yards and six scores. But what was more surprising was the defensive unit breaking away from its troubling trend of allowing opponents to score at will. The Fighting Illini finished with only 287 total yards and the Gophers forced eight punts, six more than the previous two matchups combined.

Minnesota struggled to find the endzone early in Saturday’s matchup until running back Treyson Potts rushed for a nine-yard score to give the Gophers a lead they would never surrender. The offense began to heat up after Potts’ touchdown and finished with three scores to round out the first half, two from running back Mohamed Ibrahim and one from wide receiver Rashod Bateman.

“We’re at our best when we’re balanced and I thought we were fairly balanced today,” head coach P.J. Fleck said. “I thought Rashod and the rest of the receivers played really well… but I think the run game had something to do with that, too.

Big performances from Bateman and Ibrahim helped balance the Gophers’ attack and powered Minnesota to victory. Bateman was solid but relatively quiet in the losses to Michigan, totaling 14 catches for 163 yards with no scores. But Bateman returned to his Big Ten Receiver of the Year form against Illinois’ less than stellar secondary and hauled in 10 receptions for 154 yards, including his touchdown catch from quarterback Tanner Morgan.

“Rashod is a threat,” Ibrahim said. “Whenever he is on the field you always have to have two guys on him which gets somebody out the box which definitely helped me.”

As for Ibrahim, he repeated his 200 yard, four touchdown performance from last week against Maryland. Ibrahim finished with 224 rushing yards and added 31 receiving yards. The Gophers’ rushing attack totaled 325 yards.

“I think he’s one of the most special backs in America,” Fleck said. “And when you see him on the street you wouldn’t think he is a Big Ten running back. He can see and feel blocks and holes and has such great spatial awareness.”

Down 28-7 coming out of halftime, fourth-string quarterback Coran Taylor and Illinois’ offense drove down the field looking to make it a manageable two-score game. But the Gophers made what ended up being a game-sealing stop after Illinois took a 23-yard loss off a fumble and later punted on fourth and goal.

Minnesota will return home to play Iowa next weekend. Both teams will have their eyes set on Floyd of Rosedale in the rivalry matchup as well as moving to 2-2 on the season. The Gophers are 0-3 against the Hawkeyes under Fleck.