Heated debates quickly ensued between the two groups, with competing chants like "Black lives matter" and "all lives matter" ringing out from either side. 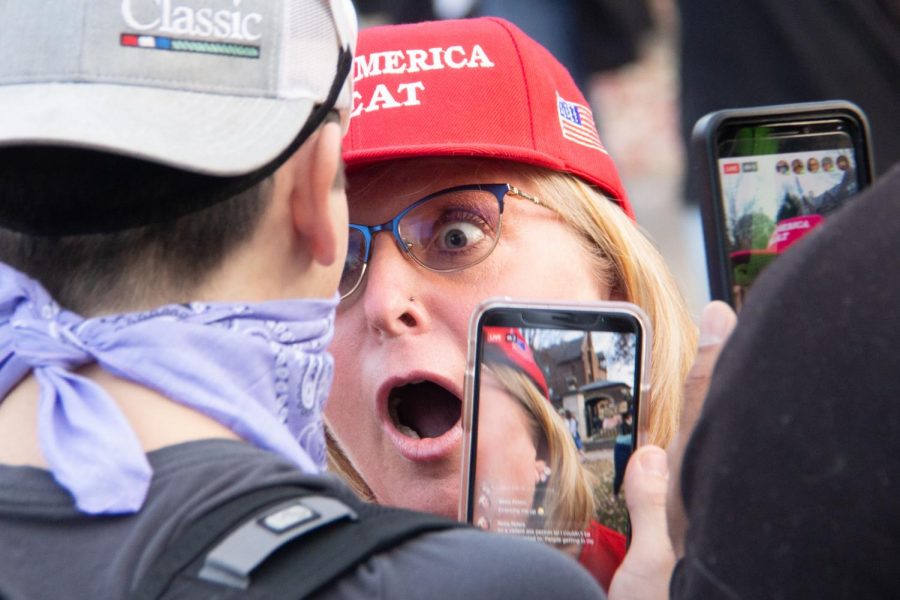 A protester wearing a "Make America Great" cap engages in a verbal altercation with a counter-protester at an event outside the Minnesota Governor Tim Walz's residence on Saturday, Nov. 7.

Trump supporters crowded outside the governor’s mansion in St. Paul on Saturday to protest vote counting and the validity of the election results. As the afternoon waned, counter-protesters showed up, leading to group shouting matches and one-on-one debates.

Protesters carried American flags and various Trump campaign merchandise, chanting “USA” and “stop the count” while demanding that Gov. Tim Walz come out to face them and their complaints.

Kelsey, a first-year University of St. Thomas student who declined to give her last name, said she attended the event because of her concerns about nationwide voter fraud.

“I would be totally okay with the loss, if it was a legitimate loss,” Kelsey said. She added that she hoped for a recount.

The Associated Press, which has counted the votes for U.S. elections since the mid-1800s, called the presidential race in favor of Joe Biden on Saturday morning. President Donald Trump has yet to concede and is pursuing legal action. While Trump has galvanized his base by regularly tweeting about election fraud, he has not provided any substantial proof.

On Nov. 5, Facebook shut down a national “Stop the Steal” group, which may have inspired the governor’s mansion protest, saying its members were trying to incite violence following the election results, The New York Times reported. The Facebook group had gained more than 300,000 members in less than 24 hours before it was shut down.

Lydia, an organizer at the Minnesota protest who declined to give her last name, protested on the street alongside her 13-year-old daughter, Lydiana.

“It’s fraud,” Lydiana said. “How can there be this many people at rallies, or, as they call it now, ‘peaceful protests,’ and it turns out blue? It doesn’t make any sense.”

About 25 counter-protesters showed up a few hours into the event, with many coming from the March for Our Future rally that was held in south Minneapolis to protest social justice issues.

When asked what she thought of the counter-protesters, Lydia said she was “disappointed.”

“They don’t know that [Trump] cares about them,” Lydia said. “It’s just so sad that they do not respect him.”

Heated debates quickly ensued between the two groups, with competing chants like “Black lives matter” and “all lives matter” ringing out from either side. Opposing protesters also debated one another on the street about topics such as systemic racism and voter fraud. Residents sat outside their homes or watched from the sidelines as the groups continued their discourse.

Isis Atallah, an organizer with the nonprofit activism group Minnesota Youth For Justice, was one of many to leave the March for Our Future rally for the governor’s mansion protest.

“I’m confused as to why they’re out here. Like, [Trump] lost so why are you here?” Atallah said. “Why are you saying ‘all lives matter’? There are Black people being slaughtered in the streets.”

There are multiple heated conversations between Trump supporters and people on the left. pic.twitter.com/V4KQAOeTIU

The event concluded by about 5 p.m. as both crowds mostly dissolved. Police opened up the blocked-off street a short time later. Walz did not make an appearance and tweeted that he was near Lake Superior that day.

Near the end of the protest, Lydia said she wished that left-leaning protesters would spend more time listening to Trump supporters.

“Most of our people try to listen to them. But many times, it’s not possible because they are really, really aggressive, attacking us,” she said. “They need to approach us with more respect and say, ‘Hey, I would like to get across my message.’”