Republican groups are happy with the gains the GOP has made, while Democrat groups are excited about Biden’s win. 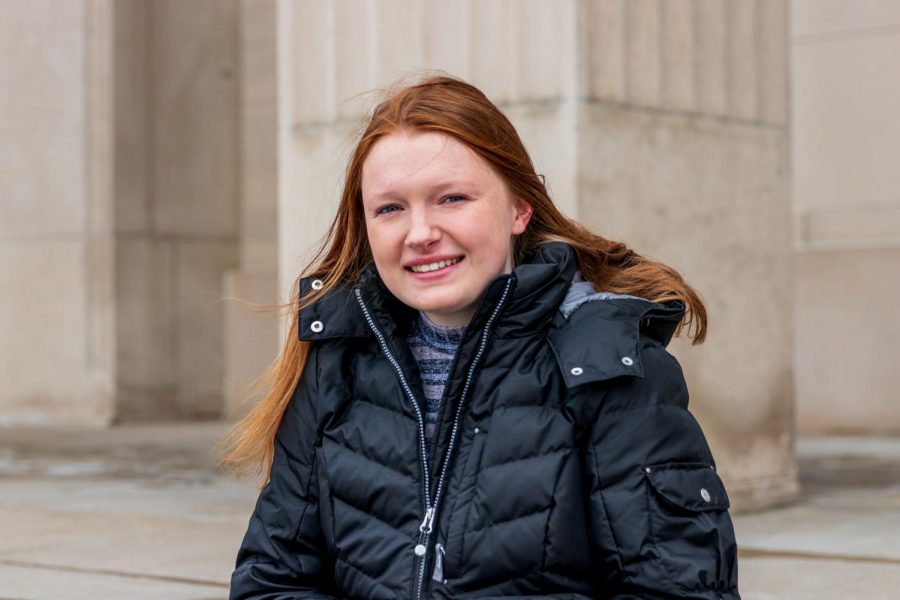 College Democrats President Claire Anderson poses for a portrait outside the Coffman Student Union on Sunday, Nov. 15. Anderson, who studies political science and French, has served as president of the group since May.

As the results of the 2020 election set in for the rest of the country, University of Minnesota students have started gearing up for an equally — if not more so — divided future.

With some refusing to accept Joe Biden’s victory in the presidential election and pro-Trump protests continuing throughout the country, University political groups are already planning for future elections.

Claire Anderson, president of the UMN College Democrats, said the group was disappointed that Democrats were unable to take control of the Minnesota Senate, but wins for Biden and Tina Smith have given the group a necessary morale boost.

“It’s good for us to be able to celebrate a win,” Anderson said. “It kind of rejuvenates us for whatever work we want to do in the future as well like, ‘Hey, we did this. We got this done. Let’s keep going,’ kind of thing.”

Minnesota’s state Legislature will remain divided following the election. The Senate will remain held by the Republicans and the House is still majority DFL.

The support for Biden among Democrats at the University has been mostly subdued. Instead, many said they hope Biden’s presidency will be a vehicle for more progressive policies regarding issues like climate change, criminal justice reform, racial justice and COVID-19 pandemic response.

“It’s kind of like we’re in a house and the house is on fire,” Schulenberg said. “Part of the group wants to start building a new house, but the other part wants to just go get a hose. I feel like Joe Biden is that hose.”

Schulenberg said it is too soon to say whether or not the group will dissolve without a clearer sign about Trump’s possible plans to contest the results of the election, but that the group would be happy to do anything they can to help defend Biden’s win.

College Republicans and Collegiate Group for Trump leader Kirby Gibson said the group was disappointed to not have “flipped Minnesota red,” but they were pleased with other gains Republicans made this election.

Gibson said while there are certain state results he’s wary of and that he thinks warrant some sort of investigation, he thinks the “fraud and theft” rhetoric overall is harmful.

Collegiate Group for Trump, a reelection-oriented group, has largely dissolved, but Gibson said that College Republicans are poised to begin preparations for the 2022 and 2024 elections.

“I think the Republican party’s in a very good spot right now,” he said. “I think in 2022, there will be big rejection of the Biden campaign regardless of what happens, and that it’s going to invigorate the Republicans.”

Both College Republicans and College Democrats intend to turn their attention to the run-off races in Georgia that are set for January.