The most recent pop-up put on by The Shui Project brought comfort and warmth to the Twin Cities community. 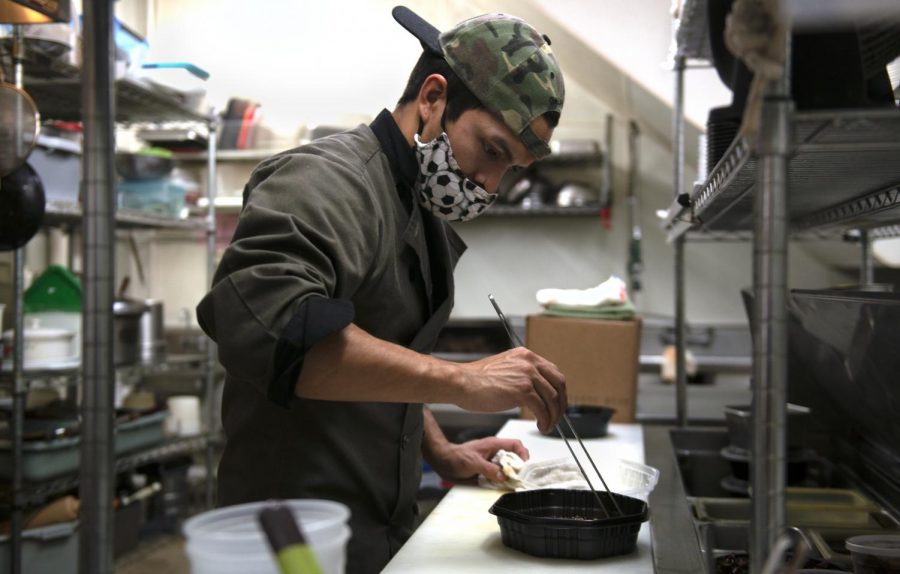 The Shui Project volunteer Kori Quillo prepares a meal that was ordered through the Food Hug, which is the Shui Project’s donation-based pay-what-you-can pop-up, at Keefer Court Bakery & Cafe on West Bank on Tuesday, Nov. 17.

In the Twin Cities, a good meal isn’t hard to find. But right now, when the city — and the country — is dealing with a pandemic, a reckoning of racial injustice and a chaotic political atmosphere, we want more than just a good meal. We want a meal that will make us feel good.

And that is what Kenji Yee and their team of 20 at The Shui Project intends to do: to make accessible and delicious food for the Twin Cities community.

Recently, The Shui Project held a pop-up at Keefer Court Bakery & Cafe on West Bank. Food Hug, the incredibly wholesomely named pop-up, was intended to provide tranquility to the community during a stressful time through comforting food. Their next pop-up is set for Dec. 15 at the same location, from noon until sellout, where hungry customers can get more savory and sweet Shui Project creations.

Yee, 36, who had worked in the restaurant industry for six years, began The Shui Project in 2019 after finding themself with an abundance of ingredients following a catering event. On their way home, Yee decided to make a menu out of the leftover ingredients and invite friends from Instagram over to their apartment to share the food.

“It was kind of through these family meals that were donation-based that The Shui Project was born,” Yee said. The Shui Project has done various pop-ups since then, expanding their audience of close friends to a greater community.

Food Hug, like every other event The Shui Project conducts, was donation-based: a pay-what-you-can model.

“Shui Project was recontextualizing what service meant — what a restaurant meant — under our current capitalistic society of like, you go to a store, you get a plate of food for $15 and then you give tip and that’s it,” Hercules Goss-Kuehn, social media coordinator for The Shui Project, said.

This donation-based model, Goss-Kuehn elaborated, allows for those who are just making ends meet, as well as those who can spend more on a meal, to pay for what they can. “I love having that accessibility so people are not pressured into feeling guilty for not paying as much, because someone else who can is going to take that shouldering,” they said.

The items on the Food Hug menu included egg foo young with thyme, mushroom gravy and herbs over white rice, chicken adobo with a soy egg and herbs over rice, kabocha congee, a kind of squash rice porridge that was topped with various mushrooms, sun-dried tomato, caramelized onions and herbs, and red bean and lotus skin mooncakes. The team lauded all of the impressive flavors of the menu, describing them as delicate, comforting, filling and flavorful.

Mel Koe has gotten to eat many of Yee’s mouth-watering creations throughout their time at Shui. Koe began as a customer and now develops recipes, works front of house for the events and helps with prep. They believe in food accessibility on many different levels and how this project allows community access to food that marginalized individuals in areas now have the opportunity to access.

“The accessibility piece really stood out to me, but more importantly, accessibility to food that is so unique where people who cannot financially access those foods in the first place cannot culturally access them, like all these fusion foods and marinades and sauces that I’ve tried,” Koe said. “It aligns with my public health background … and food justice and food politics, and striving to bring all this food to people who can’t access it.”