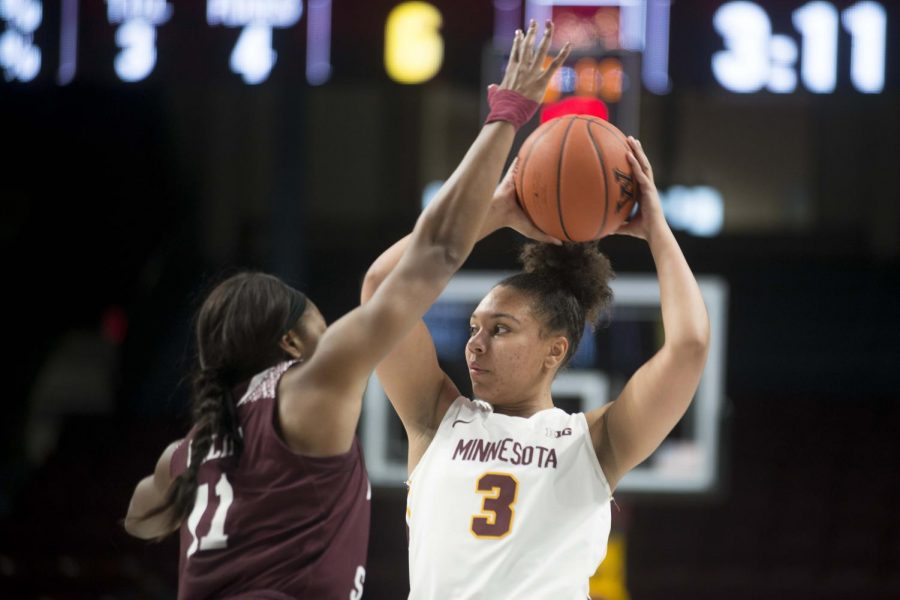 Forward Destiny Pitts looks to pass the ball through a defender at Williams Arena on Tuesday, Nov. 5. The Gophers fell to Missouri State 69-77.

Gophers’ head coach Lindsay Whalen lost nearly 50% of her team’s scoring from a season ago, so she knew that she had to get creative in finding new pieces for her team in 2020. Lucky for her, there was a pair of native Minnesotans in the transfer portal that had grown up dreaming of playing for the Gophers.

Bagwell Katalinich, an Academy of Holy Angels graduate, knew that the University of Minnesota was always somewhere that she wanted to end up.

“I wanted to go to a place where I could play competitive basketball and push myself athletically but also compliment the degree that I already earned at Cornell,” she said.

The 6-foot forward is planning to pursue the University’s one-year masters program in sports management. Although this will be Bagwell Katalinich’s first year with the Gophers, she will be one of only two senior players on the roster.

“I think it would be a waste for me not to take on some leadership role,” she said. “Something that I have always tried to do is make people’s lives easier by sharing what I have learned and seen.”

Making the jump from a midmajor conference like the Ivy League all the way to Big Ten conference competition can be challenging for some, but the former first-team All-Ivy League member is up for the challenge.

“I am 6 feet tall, and there are girls that are easily 6-foot-3, 6-foot-4 in the Big Ten,” Bagwell Katalinich said. “I am not going to grow and be 6-foot-4 this season, so just being smart with my footwork and shot selection to balance out that height and strength disadvantage is something I worked on a lot this offseason.”

Bagwell Katalinich is immediately eligible to play this season as a graduate transfer. With so much roster turnover, the 6-foot forward could be in store for a big role with the Gophers in 2020 after averaging 13.4 points and 7.0 rebounds a season ago with Cornell.

Mershon, a graduate of Minnetonka High School, knew that the University of Minnesota felt like home when she faced the Gophers at Williams Arena last season with Nebraska.

“When I came to play at Minnesota last season [with Nebraska], there were 30 of my friends and family at the game, and I just felt loved,” she said. “I knew that this place felt like home.”

Mershon just completed her second season at Nebraska, averaging 1.6 points and 2.5 rebounds per game. She will not be eligible to play for the Gophers this season as she sits out one season due to NCAA transfer rules. She sees the year off from games as an opportunity to grow her own game and take her skills to the next level.

“I really want to work on my scoring mentality. At Nebraska, they saw me more as a defensive threat, while the coaches here want me to be more of an overall player,” Mershon said. “I think working on my offensive game and connections with my teammates will make the transition that much easier next year.”

Standing at 6-foot-3, Mershon has all the intangibles to be a very effective post player in the Big Ten for the Gophers in 2021.

The Gophers are set to begin their 2020 campaign on Dec. 2 when they host Eastern Illinois. Big Ten Conference play is set to begin on Dec. 9.