The Gophers’ youth and lack of depth shown in blowout loss to Drake. 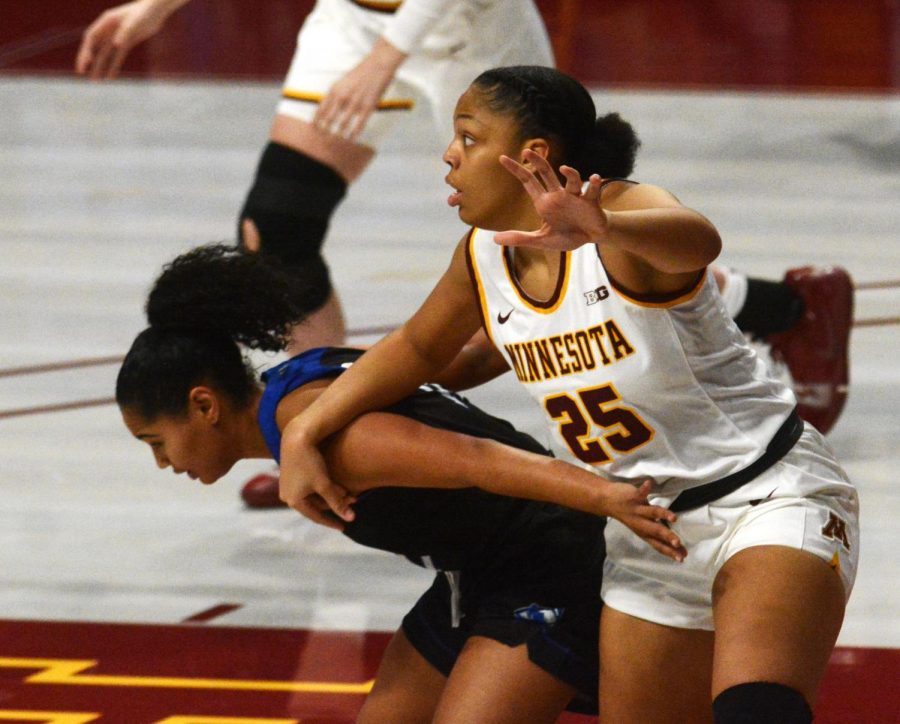 Gophers head coach Lindsay Whalen remained shorthanded, but she did receive two reinforcements. Sara Scalia and Laura Bagwell Katalinich remained out due to injury or illness for the second consecutive game, but Alexia Smith and Caroline Strande partook in warmups. Strande was the only one to appear in the game, finishing with nine points, four rebounds and four steals.

“I liked her approach, I thought she was aggressive. She made a lot happen. It was her first game against the preseason No. 23 team in the country, so I thought she did really good,” Whalen said. “I was very impressed.”

The Drake Bulldogs were voted to finish fourth in the Missouri Valley Conference and entered this matchup 1-2 on the season following a close loss to Iowa. Drake head coach Jennie Baranczyk has led her team to six straight 20-win seasons, so the Gophers had their work cut out for themselves.

Drake began the day scorching hot, shooting 6-of-7 from the field and 4-of-4 from the charity stripe. The Gophers quickly trailed 19-5 with 5:35 remaining in the first quarter. Gadiva Hubbard did her best to keep the Gophers in the ball game with three first quarter made threes, but Drake failed to cool off, leading 33-17 after the first quarter.

The Gophers failed to make any dent into the Bulldogs lead in the second quarter. In fact, Drake extended its lead to 22, 56-34. Minnesota struggled to slow down Drake’s high-powered offense, as the team shot 7-of-10 beyond the arc in the half. The Gophers struggled to find a rhythm of their own on the offensive end. Hubbard and Powell led with nine first half points each, while Drake’s Kierra Collier led all scorers with 13 at the break.

The second half truly could not have started much worse for the Gophers. Drake continued to find success on wide open threes and backdoor-cutting layups. The Bulldogs jumped out to a 13-1 run, and Minnesota looked completely outmatched. Drake led 81-43 heading into the fourth.

Minnesota ran into much of the same problems in the fourth quarter. Jasmine Powell began to find her rhythm shooting the ball, finishing with a team high of 22 points. But it didn’t change the end score of 99-66 and the Gophers fell to 1-1 on the season.

Overall, there was not one single reason for the Gophers’ disappointing performance. They didn’t get destroyed in the rebounding or turnover margin. Drake simply had more high-percentage shots and found great success in making said shots.

Heading into next week’s game, there is obviously a lot that needs to improve, but Whalen and the rest of the team believe communication on defense must be first.

The Gophers will begin Big Ten conference play next week, when they host Michigan State Wednesday, Dec. 9 at 8 p.m.