Gophers without rust after 22 days between games 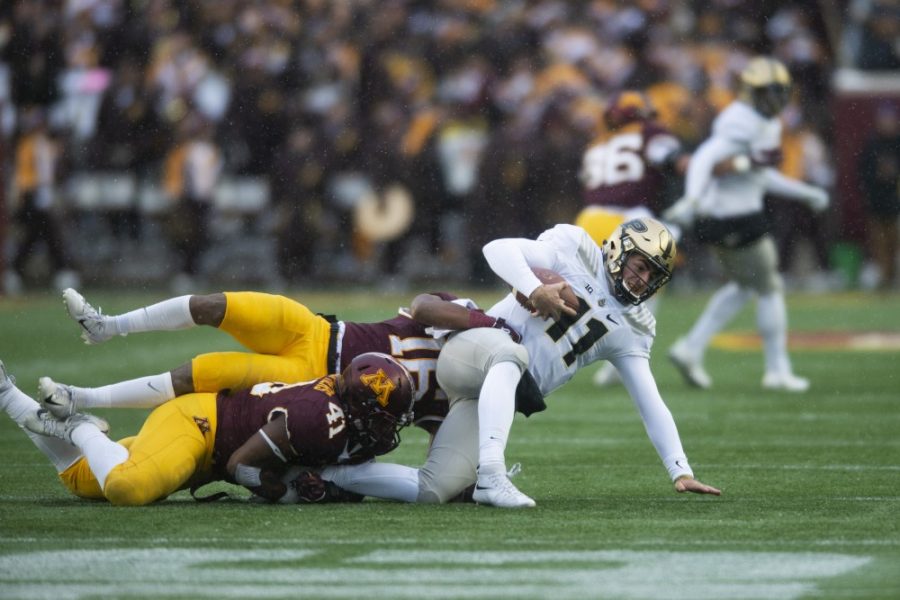 Coming into Saturday, the biggest question about Minnesota was if the Gophers would have to scrape off some rust after missing two games thanks to COVID-19.

Any rust did not seem to play a significant part in the game, as the Gophers looked fresh and prepared on both sides of the football and beat Nebraska 24-17 in a close Big Ten West matchup.

Before the game began, the Pioneer Press reported that Minnesota would be without 33 players due to injuries or COVID-19. This meant the Gophers were in need of players all over the field to step up to help secure the victory.

“I think it just showed how tough we are,” Tanner Morgan said. “I am extremely thankful for this team and to be a part of this team.”

John Michael Schmitz and Axel Ruschmeyer were two regular starters on the offensive line who did not play Saturday. Nathan Boe, the first offensive lineman off the bench this season, and Aireontae Ersery, a true-freshman, stepped in to start and helped the offense continue its success.The Gophers continued to be productive in this area, providing rushing lanes for running backs and a clean pocket for Morgan.

“I think they showed how tough and united they are,” Morgan said when asked about the short-handed offensive line. “Doesn’t matter who’s in there, they’re going to play extremely hard for each other and for the benefit of the football team.”

On top of that, the Gophers knew they would not have receiver Rashod Bateman as he decided to opt out of the remainder of the season. Chris Autman-Bell was expected to be Morgan’s primary target and finished with five receptions for 82 yards. But receivers Clay Geary and Daniel Jackson also played their way into the mix and made crucial catches to extend possessions for Minnesota. Geary and Jackson combined for seven catches for 75 yards.

Tight ends are generally a significant part of Minnesota’s offense in both the running and passing attack, but the Gophers were without two regulars in Ko Kieft and Jake Paulson. Brevyn Spann-Ford was just another player who filled in at a needed spot and caught a touchdown pass to give Minnesota a three-point lead to end the first half.

Cam Wiley, Treyson Potts and Bryce Williams also needed to carry more of the load in the Minnesota backfield early in the contest. On his first touchdown of the game, Mohamed Ibrahim broke loose for 26 yards, but appeared to have a minor injury and equipment issue at the end of the play. Instead of receiving his normal share of the work early on, Ibrahim did not see many snaps in the second and third quarters. He did close out the game on the final drive for the Gophers and finished with 108 yards.

On the defensive side of the ball, it was immediately evident the Gophers were ready as the unit did not allow the Cornhuskers to score in the first quarter. Defensive back Tyler Nubin also came up with an interception off a tipped pass to give Minnesota good field position.

Minnesota finishes its original eight-game slate having played only six games and a 3-3 record. The Gophers will face a Big Ten East division opponent based on standings next week. With a win, Minnesota could become bowl eligible to end this “challenging” season.

“This is something nobody has been through,” head coach P.J. Fleck said after the win. “So to say that this has been challenging is an understatement. This has been the hardest year I have had as a head coach, and I’ve been 1-11.”