Gophers’ Ibrahim named Big Ten Running Back of the Year

Playing only six games, Ibrahim leads the conference in rushing yards, touchdowns and yards from scrimmage. 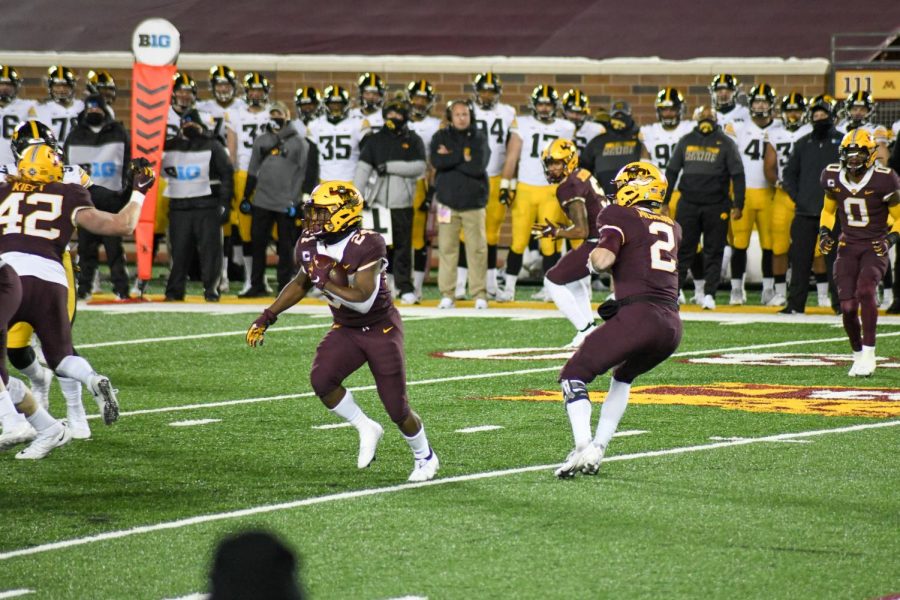 Gophers running back Mohamed Ibrahim carries the ball at TCF Bank Stadium on Friday, Nov. 13. The Gophers fell to the University of Iowa Hawkeyes 35-7.

Gophers’ running back Mohomed Ibrahim was named the Big Ten Ameche-Dayne Running Back of the Year, the athletics department announced Tuesday.

🚨 A HUGE #B1GFootball 👏🏻 for the 2020 Ameche-Dayne Running Back of the Year 🏆@_MoIbrahim was the heart and soul of @GopherFootball's ground attack this year 🔥 Congratulations on a great season! 🏈pic.twitter.com/XkDi2CLp2O

Ibrahim is the first Gopher to ever receive this award, after rushing for 925 yards and 15 touchdowns in only six games. Those numbers are first in the conference and he also leads the conference in yards from scrimmage.

In addition to winning Big Ten Running Back of the Year, Ibrahim was the only player to be unanimously named to the All-Big Ten first team. He was also the only Gopher to be named to the first team, but three Minnesota players earned third team honors in Rashod Bateman, Connor Olson and Blaise Andries.

Ibrahim is tied for the most consecutive 100 plus yard rushing performances with Laurence Maroney at seven games. He’ll look to set the school record on Saturday, when the Gophers take on Wisconsin in Madison in the battle for Paul Bunyan’s Axe.