Gophers return to home ice, drop both games in series against Notre Dame

After a string of wins to open the season, Minnesota struggled against Notre Dame’s physical play, losing 2-3 Friday and 1-2 Saturday. 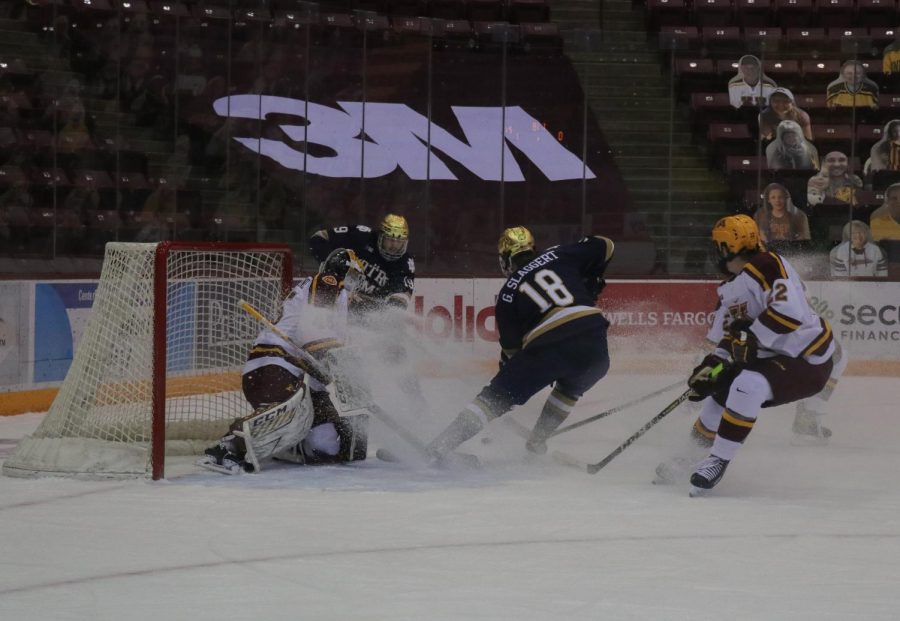 Minnesota came into this weekend’s series against Notre Dame knowing that it would likely be a close, one-goal game and the Fighting Irish showed up ready to battle for it. The physicality started early, with one shoving match breaking out between Bryce Brodzinski and Notre Dame’s Max Ellis before the first puck drop. Minnesota got on the board first and was able to keep pace with a determined Notre Dame squad until the third period, when the Irish took over possession to score the game-winning goal and secure the 3-2 victory.

The first period shots were low for both teams; with six minutes remaining, Minnesota had only registered four shots to Notre Dame’s seven. After generating several good chances, the fourth line set up Jackson LaCombe for his first goal of the season. Assisted by Mike Koster and Jack Perbix, LaCombe wound his way around the Fighting Irish until he found an angle near the top of the zone. The goal gave Minnesota a 1-0 lead it would maintain nearly through to the end of the first, but Notre Dame scored directly off a face off with about 30 seconds remaining in the period. The teams headed to the locker room tied 1-1.

Minnesota’s two goals came from all over the roster, which was something of a testament to the Gophers’ depth as a team, even if the final outcome wasn’t in their favor. In the second period, a strong shot down from the middle by Brannon McManus was followed up by a shot to the same place by Sampo Ranta, who connected to put the Gophers up 2-1. Ranta’s goal was assisted by Jaxon Nelson.

After a fruitless power play chance, Minnesota was killing off a hooking call against Nelson when Notre Dame was able to score to tie the game 2-2. The score remained tied into the second intermission. Notre Dame’s Graham Slaggert scored the game-winner with just under five minutes remaining in the game.

Unranked Notre Dame secures the sweep over No. 1 Minnesota

Returning from Friday’s loss, Minnesota once again had trouble getting through Notre Dame’s stifling defense, with the team’s first and only goal of the night coming with just over two minutes left in the game.

Minnesota pulled goaltender Jack LaFontaine from net to allow Nelson to take the ice as an extra skater and Nelson scored with assists from Ryan Johnson and Sammy Walker. But it came too late, as Notre Dame held on to its lead to secure the sweep with a 2-1 victory.

The lack of scoring wasn’t for lack of effort on Minnesota’s part; the chippy back-and-forth with the Fighting Irish granted the Gophers five power play opportunities, but they were unable to convert on any of them. After the game, head coach Bob Motzko said while the team’s main power play unit had a solid attack plan in mind, Notre Dame had done its homework watching game film and was well prepared to counter it.

In the second period, Minnesota outshot Notre Dame 11-6, but a hooking penalty called on junior Blake McLaughlin proved costly. The Gophers were unable to kill off the penalty, allowing Ellis to score and put the Irish ahead by two goals.

The second period was the most penalty-filled of the game, and while the roughness of play was something the Gophers weren’t quite accustomed to seeing in their earlier games this season, Motzko said it was something he hoped the team would learn from going forward.

“We hope this is the weekend that we’re going to grow up from and turn us around,” Motzko said. “We didn’t have a series like this week or last week in the first half, you know, physical, hard. And we responded last week on Saturday, and we did tonight in the second two periods, but it wasn’t enough.”

The Gophers will look to bounce back from the sweep in their upcoming series against Arizona State on Jan. 21-22.