After not playing a fall season, Minnesota and the rest of the Big Ten will begin a conference-only spring season in January. 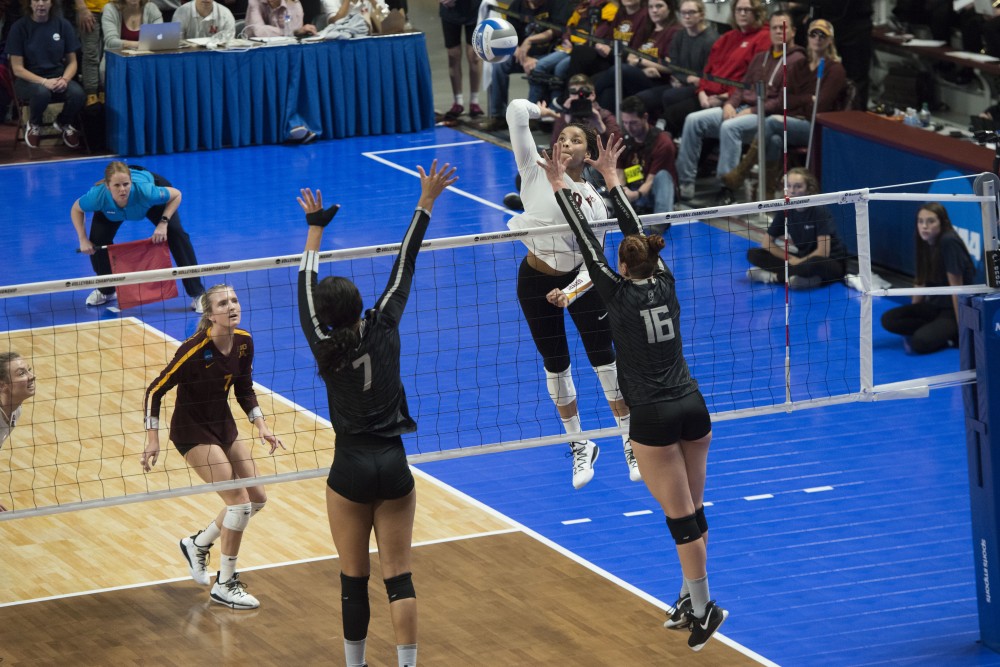 Outside hitter Alexis Hart jumps to spike the ball at the Maturi Pavilion on Friday, Dec. 7, 2019. The Gophers were upset by Oregon, losing 3 sets to 1.

After what will be a 401-day hiatus, the seventh-ranked Minnesota volleyball team is preparing for a return to action in 2021.

The Gophers last took the court on Dec. 19, 2019 in the Final Four semifinals. At that point, the Gophers were disappointed about the loss to eventual 2019 champion Stanford but had no idea what was to follow in the coming months.

Due to COVID-19, Minnesota and other Big Ten programs were on hiatus in the fall when the season would normally be played. Little news or discussion was made about when volleyball would return until a few weeks ago when the Big Ten and the University announced a schedule taking place throughout the spring semester.

The season officially begins on Jan. 23, when Minnesota hosts Michigan State for a two-match series. The Gophers’ schedule consists of 22 matches against 11 Big Ten opponents and no nonconference matches. For comparison, Minnesota played 29 regular season matches in 2019 and played eight nonconference matches prior to Big Ten play.

The Gophers squad is going into 2021 with high expectations coming off their third Final Four appearance in five seasons and finishing tied for second in the Big Ten. But a conference-only schedule should be a significant test for Minnesota, as the Gophers are not the only highly-ranked Big Ten team. The AVCA Preseason Poll ranked six Big Ten programs in the top-25, four of which are in the top 10 in the country. Key teams that will challenge the Gophers include top-ranked Wisconsin, who Minnesota lost to twice in 2019, fifth-ranked Nebraska and ninth-ranked Penn State.

Besides COVID-19 protocols and the potential of matches being postponed, another interesting factor heading into the season is the idea of rust. Unlike the Big Ten, other schools in the South Eastern, Atlantic Coast or Big 12 conferences elected to play volleyball in the fall as they normally would. Schools from those other conferences will also play in the spring but have had the advantage of playing a significant number of matches in the fall. Texas, for example, finished with a 14-0 record this fall, while Minnesota has not experienced a live match in little over a year.

Regarding the roster, the Gophers lost three key players from last season in Taylor Morgan, Alexis Hart and Kylie Miller. Morgan and Hart finished last season making second team All-Big Ten and Hart was named to the AVCA All-American third team. Miller missed 13 matches due to injury but was a key contributor at setter when healthy.

Experience is still an advantage for the Gophers in 2021, with three key players returning in Regan Pittman, Stephanie Samedy and CC McGraw. All three were named first team All-Big Ten in 2019, and Pittman and Samedy were named AVCA first team and second team All-American respectively. Pittman, along with Rachel Kilkelly, played in all 118 sets for the Gophers last season. Overall, Minnesota has five players returning who played significantly in 2019, in addition to bringing in the top-ranked recruiting class. When the season kicks off on Jan. 23 against Michigan State, both the new faces and returners will look to help Minnesota return to the Final Four in an unusual spring season.