Subterranean fungi could be key to treating devastating bat disease

University of Minnesota researchers are exploring ways cave fungi could be used as a biological control agent. 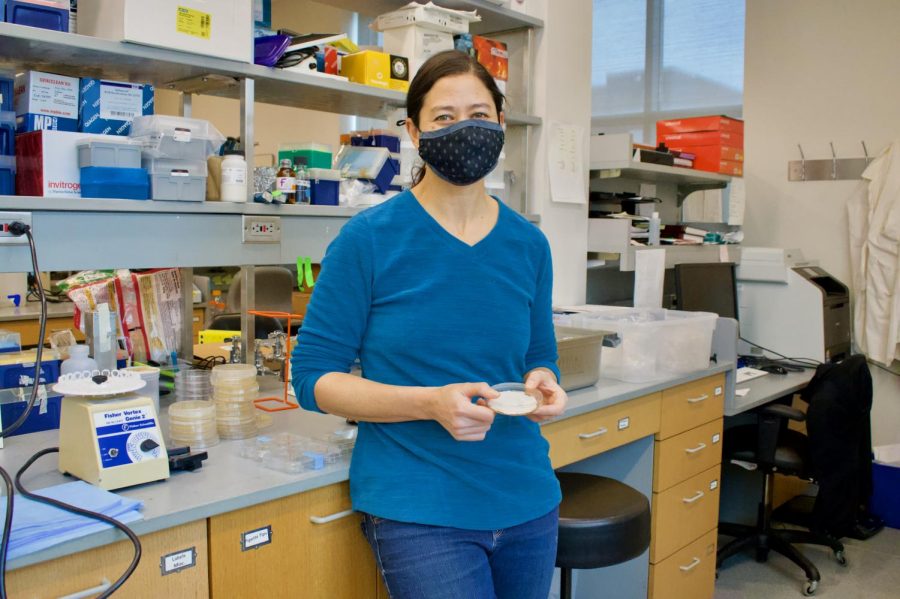 Associate Professor Christine Salomon poses for a portrait in her lab in Nils Hasselmo Hall on Tuesday, Jan 26.

For the past four years, University of Minnesota researcher Bob Blanchette has examined over 165 varieties of subterranean fungi that have been growing in various caves and iron ore mines around Minnesota.

Of those varieties, 46 of the fungi types do not match any type of fungus scientists have seen before, Blanchette said. One variety stretches over rocks and crevices like cobwebs. Another variety appears as a bright teal patch on the ground, and a third variety takes up enough space to fill an entire room.

Blanchette and several other researchers published some of their initial findings last summer. Part of their research is looking into whether the compounds these fungi produce could be used to combat a deadly disease that has decimated Minnesota’s bat populations in recent years.

Some sites in Minnesota have seen their hibernating bat populations drop 94% due to white-nose syndrome, a disease characterized by a white growth on a bat’s nose, wings and ears. The disease was first documented in the state about five years ago and is caused by a fungus called Pseudogymnoascus destructans (Pd).

Bats with white-nose syndrome wake from hibernation prematurely and begin foraging in the winter. Because food and water sources are scarce, bats die because they use up their limited fat reserves to sustain themselves.

“Every time they wake in the winter, it’s very energetically costly. It takes a lot of energy to warm their bodies back up,” said Minnesota Department of Natural Resources mammal specialist Melissa Boman. “Because their fat reserves are so limited and every wake up is costly, those bats essentially starve.”

Blanchette said studying the subterranean fungi could be key to stopping the spread of Pd.

“We really don’t have a lot of information on the biology and ecology of these organisms. And this is [also] true for the pathogen that causes the white-nose syndrome of bats,” he said. “If we could learn more about that biology and the ecology of them, we can likely have a better opportunity to find controls for them.”

Christine Salomon, an associate professor at the College of Pharmacy’s Center for Drug Design, has been studying samples taken from these mines and caves in her lab. Examining the compounds in the fungi and bacteria, Salomon is looking for microbial strains that inhibit the growth of the fungal pathogen Pd causing white-nose syndrome in bats.

The approach of using a living organism to combat the growth or spread of another organism is known as “biological control” and has been used successfully in agricultural settings to treat a number of diseases and insect pests, she said.

So far, Salomon said her lab has identified more than 100 different microbial strains that inhibit the growth of Pd in a lab setting.

Because Pd spores remain on cave walls and floors for a long time and the disease has spread to so many bats, it may be impossible to treat bats individually for Pd, Salomon said. Her focus then has largely been on developing treatments for cave surfaces to reduce the amount of infectious white-nose syndrome pathogens.

By isolating the active components in each potential biocontrol strain, her team tests to see if the compounds are toxic to bat cells. Using samples from the cave walls Blanchette’s team explored, they are also testing to see if these living microbes are effective as a biological control agent on the cave’s rock ceilings and walls.

The process is slow and tedious, and researchers must be careful about the implications of introducing foreign microbes into the environment or using treatments that could negatively impact other species besides bats, she said.

Finding natural compounds and biological control agents to address the outbreak rather than using synthetic pesticides or other human-made treatments could not only be less expensive but better for the environment, if they can prove biological control is as effective, Salomon said.

Blanchette said venturing into these caves to explore how these fungi are adapting to extreme environments is exciting, and something the state will hopefully be able to use in the future.

“These [fungi] are untapped resources in Minnesota here that could be very beneficial and very useful in the future,” he said. “And most important is to find out what they are and what they do.”

Editor’s note: Due to an editor’s mistake, the featured photo of this story was initially published with an incorrect caption. The caption has since been corrected and updated.