After his 2020 championship campaign was cut short due to the pandemic, Steveson is still laser-focused on winning his first heavyweight NCAA crown. 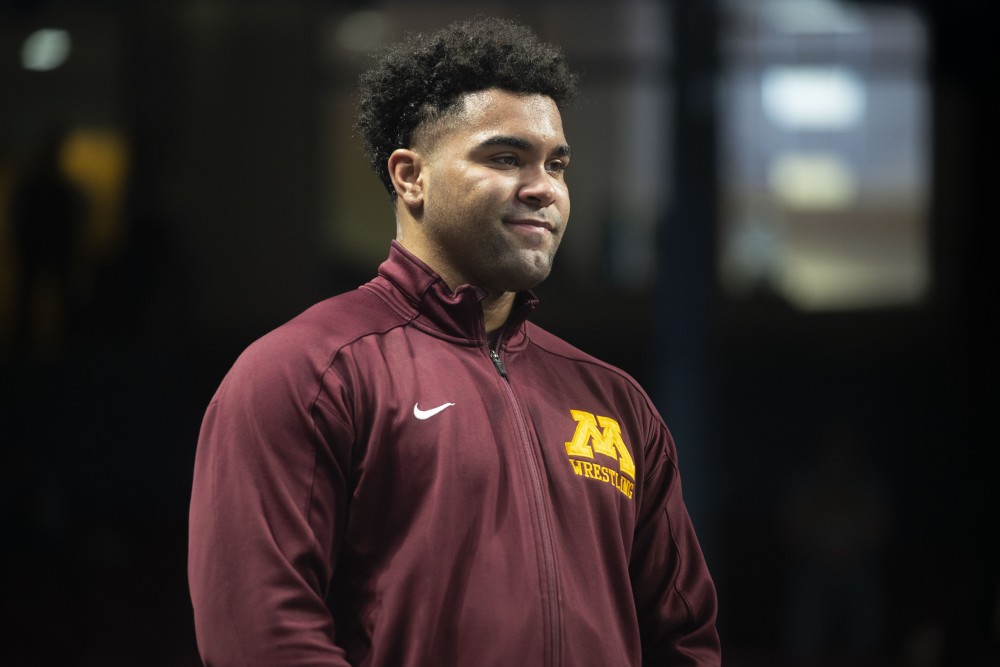 Gable Steveson stands on the podium after receiving his second place award on Sunday, March 10, 2019 at Williams Arena in Minneapolis. Steveson lost the match against Anthony Cassar of Penn State 4-3.

Ever since falling to Anthony Cassar in the 2019 NCAA tournament, Steveson has gone an impressive 23-0, including a 6-0 record in his 2021 campaign. He notably defeated Mason Parris in the 2020 Big Ten title match going into the NCAA Tournament, which he was favored to win before COVID-19 caused its cancelation.

“I was confident going into the NCAAs that I could come out on top. That was my year to do it after beating an opponent like Mason Parris, who came in and pushed me the whole seven minutes,” Steveson said. “He is the next best guy behind me, and after that win it was a huge confidence boost.”

Steveson recently defeated the No. 3 heavyweight in the country, Tony Cassioppi of top-ranked Iowa, in a 15-6 major decision. Steveson thought the match in Maturi Pavilion provided a championship feel.

“He’s one of the top guys in the country too. He pushed Mason Parris to the limit, and I think Cassioppi is a great wrestler, but my dominating win over him shows that I can come out on top in March and show there is a major gap between me and the rest of the guys,” he said.

Overall, Steveson thinks his biggest competition in 2021 will once again be Parris. Parris, also a junior, is from the University of Michigan and is currently No. 2 in the country behind Steveson, according to InterMat Wrestling rankings.

But Steveon isn’t concerned about potential challenges from Parris or Cassioppi. For him, winning the 2021 national championship isn’t just a goal — it’s an expectation.

“Being completely honest, I don’t think winning a championship was ever a really deep challenge in my mind. With all of the wrestlers that are in the field, it provides a test for sure, but it’s always been a thing in my head that I have to achieve a national championship,” he said. “There’s not going to be another year of me saying, ‘I have to go get it,’ where it’s the No. 1 thing. Winning a title has been my goal since I came into the University of Minnesota, so the pressure that is being put on me to win is just me knowing and telling myself, ‘I can do it.’”

But Steveson hasn’t been waiting for a title to fall into his lap. He may have spent time this summer wakeboarding on Lake Minnetonka or on a boat at Long Lake, but if you’ve seen the top heavyweight in action this season, he looks even bigger than he did during his 2020 campaign.

It’s no coincidence. During the summer, Steveson gained 20 pounds in training and preparation for the season. But what’s more surprising is he did not plan for it.

“The weight came on quick, and people can tell now when I wrestle that I look different in some ways, and I’m just making sure that I’m doing all the right things to grow. Jumping up 20 pounds just happened one day when I stepped on the scale,” Steveson said. “But I knew my weight would clean up in the right ways since I wasn’t wrestling. Now, I’m five pounds lighter at the 260 mark to have the physical appearance and the look to be the best I can.”

The next step for Steveson is a national title, something he’s been eyeing since he first stepped foot on the University campus. And the national title would provide the footing for the following step, bringing him closer to his ultimate dream of competing in the WWE.

“It’ll create another legacy that I’m writing right now as the days go by, match by match. Having that national championship will bring me to a new height, platform, and have me solidify my spot out there as one of the best, and it’s only a matter of time when that happens,” he said.