A slow start on the road wasn’t abnormal, and neither was the loss, however Minnesota kept the game close up until the buzzer. 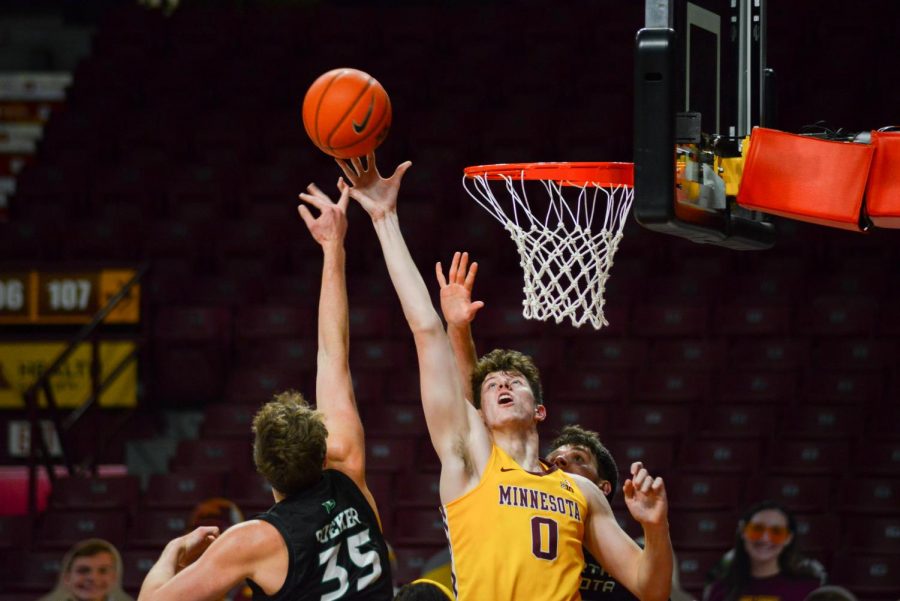 Gophers center Liam Robbins leaps for the ball at Williams Arena on Friday, Dec. 4. The Gophers went on to a 76-67 victory over the North Dakota Fighting Hawks.

It wasn’t a blowout, but the Gophers men’s basketball team continued to struggle on the road as they dropped their third game in a row. The Gophers battled the whole game but weren’t able to get it done and lost to Rutgers 76-72.

A slow start to the first half was right on cue for how Minnesota has played on the road this season. They went almost six minutes without scoring while shooting 0-of-7 from the field as the Scarlet Knights got off to a 9-0 lead.

The rest of the half revolved around the Gophers moving the ball a lot better on offense and slowly fighting back into the game. A big contributor to that comeback came from freshman Jamal Mashburn Jr. coming off the bench and scoring 10 points in the half.

After fighting back for most of the half, the Gophers finally were able to tie the game, and subsequently took their first lead of the half 25-23. After some back and forth to finish off the half, Minnesota was able to go into the break leading 37-35.

Even with the slow start, the Gophers should have had a larger lead going into the half. Minnesota shot 14-of-31, but were just 7-of-15 on their layups and missed some shots that definitely should have fallen.

Another positive that came from the first half was the Gophers only took seven three pointers, hitting on three. Head coach Richard Pitino has stressed the fact that Minnesota is one of the worst three point shooting teams in the nation, but still shoot a high volume of threes. Thursday was the opposite case as they shot 6-of-18 from deep.

Though the second half shooting was worse than the first half for Minnesota, the Gophers were still in the game, which has been unusual on the road. After losing by double-digits in each of their first five road games, Minnesota played with a different intensity Thursday.

The second half heroes for Minnesota were none other than Carr and Robbins, as both took over in their own ways. On top of his 18 points, Carr dished out seven dimes and grabbed six boards, albeit he had five turnovers.

“I thought [Carr] was terrific. Just took what was given to him, made some big plays, really tried to will us to victory,” Pitino said.

Robbins was big for the Gophers down the stretch and secured his second double-double of the season. Although he fouled out in the closing seconds of the game, Robbins finished with 16 points and 10 rebounds to go along with three steals.

“He played 23 minutes, it’s a lot for a freshman in a tough game. I thought he was terrific, obviously, in the first half. He’s going to be a really good player, he really is,” Pitino said.

The Gophers’ last chance to tie up the game was in the hands of Carr. Rutgers played it perfectly and gave Carr no openings and he was forced to throw up a three that ended up an airball. It was clear that Carr was taking that shot and no one else.

“We ran a play that’s won us a lot of games and we just didn’t get the right shot that we needed to. It’s been good in the past, wasn’t good there, you got to give the defense credit, but I thought that [for] 37 and a half minutes we were terrific,” Pitino said.

Williams in, Both out

This was the second game where sophomore Tre’ Williams was in the starting lineup and junior Both Gach came off the bench. After an efficient eight-point performance in his first start, Williams had just three points on 1-of-5 shooting.

Gach on the other hand scored six points in his 15 minutes on 3-of-7 shooting. He was playing with a lot of intensity in those 15 minutes and spent a few of them on the floor diving for loose balls.

“I think Both is starting to get his confidence back, which is great. So he’s ready to go off the bench, he was ready to go, especially in the second half, to go make some big plays,” Pitino said. “Tre’ did some good things as well, made a three, got a couple rebounds.”

The Gophers used second chance points and points off turnovers to help them stay in the game. Minnesota has liked to use the transition game a lot this season and it showed out tonight getting 12 points off 12 turnovers.

On the glass, the Gophers pulled in 16 offensive rebounds courtesy of Robbins and redshirt senior Brandon Johnson accounted for 10 of them. Minnesota scored 14 second chance points.

“[Rebounding] was a big point of emphasis. At Purdue, we got outrebounded heavily, and it was just something that you just need to do,” Robbins said. “Me and Brandon are fighting on the same side, sometimes I got it, sometimes he got it, but we were in a war together.”

The Gophers return to the Barn Feb. 8 and will try to end their losing streak against the Nebraska Cornhuskers.