Garnering 100 signatures, the students sent the letter to the Law School administration. 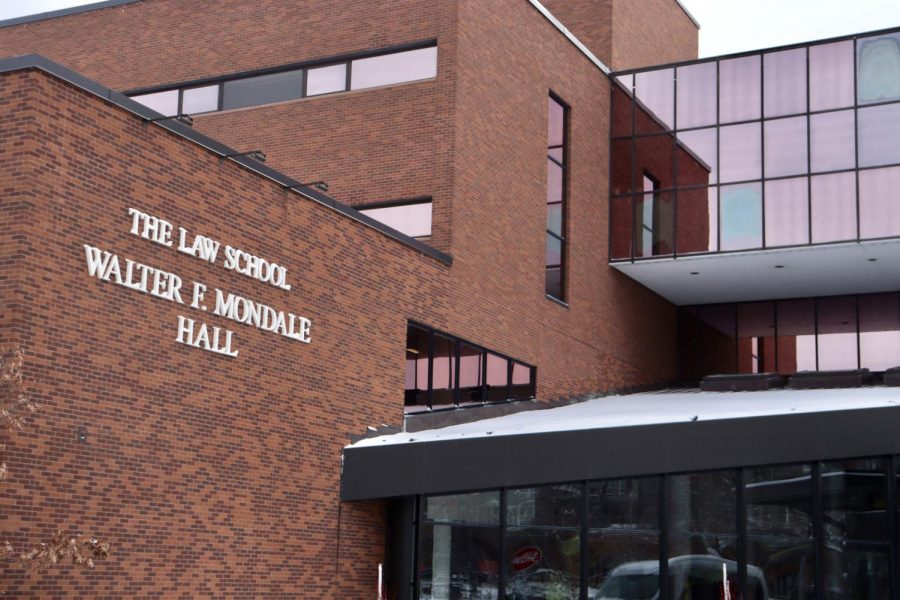 Walter F. Mondale Hall, home of the University of Minnesota's Law School on Thursday, Feb. 4. Some first-year law students wrote a letter addressing the law school and its handling of issues involving the pandemic.

A group of first-year University of Minnesota law students wrote a letter to the Law School on Jan. 12 raising concerns regarding a lack of communication about COVID-19 exposures, classes and final examinations overlapping with religious holidays and unclear fee charges on student accounts.

Molina said some students who are not involved in student government, like the Law Council, feel like decisions are being made behind closed doors. The letter provided an inclusive platform for student voices, she said.

In an emailed response to the letter, Erin Keyes, assistant dean of students in the Law School, said the Law School is following the University’s guidelines that were developed by health experts. In addition, the Law School has implemented updated guidelines to prevent the spread of COVID-19 among law students. Some classes are currently held in person with a choice to be remote.

“As a unit of the university, the Law School is not allowed to send any notifications or announcements about positive COVID cases to our Law School community, even keeping the individual anonymous, unless directed to do so by public health or University officials,” Keyes said in her response.

Keyes added that the Law School and the University at-large had zero confirmed cases of transmission in a classroom and that no one is required to attend classes in person.

“Throughout the response that [Keyes] provided us, there was just this really common theme of the burden being on us, as students, to reach out for help,” Molina said. “When you’re drowning in the school work, there’s not a lot of opportunity for us to reach out until it is too late.”

Zack Taylor, a first-year law student, said he helped draft the language regarding the religious holiday overlap with courses in the letter. He is involved in the Jewish Law Student Association and the Law School Armed Forces Association.

“To me, the power dynamic in a diverse and inclusive community is not one where you have this majority culture, and then everyone else is asking to be included,” Taylor said. “It’s where everyone is included by default.”

Last fall, when exams were held during Hanukkah, some first-year students said it was their breaking point from frustrations with the Law School.

The letter drew attention to the Law School’s final examination period this spring coinciding with the month of Ramadan, which will begin in mid-April until mid-May. Finals exams at the Law School are scheduled to start on April 29 lasting until May 10.

“Expecting students to take exams on strict time constraints while fasting presents obvious concerns of performance that could significantly affect their class standing,” read the letter.

According to Keyes’ response, the Law School is working with the Muslim Law Students Association to making accommodations for students observing Ramadan, and “a number of variances were approved in response to individual student situations.”

Although student fees are determined by the Board of Regents, Garry Jenkins, dean of the Law School, said the Law School froze tuition last year for the first time in decades. Last Monday, the Law School hosted a town hall meeting, partially in response to the students’ letter, to communicate directly with students, he added.

“We’re committed to our students’ academic success and wellbeing, and we’re interested in removing as many barriers as we can,” Jenkins said. “That doesn’t mean that we can do everything in exactly the way every individual student asks, but that does mean we’ll continue to recognize their challenges and work really hard to address those issues as they arise.”

After attending the student town hall, Robinson said in an email that “while students could send in questions beforehand, it felt super scripted and the common theme was defensiveness and pointing to resources they already have.”

Keyes has reached out to Molina and Robinson to schedule a meeting to further discuss the letter. Keyes said she is continuing to communicate with students to address concerns.

“We ask the University administration to take these concerns to heart, and recognize the University of Minnesota community wants to do everything in our power to alleviate as many of the burdens of the COVID-19 pandemic for our peers as possible. But we can only do so with the full support and understanding of our university,” read the student’s letter.