Without Angus Flanagan, the Gophers earned two draws and a loss in Palm Coast, Florida. 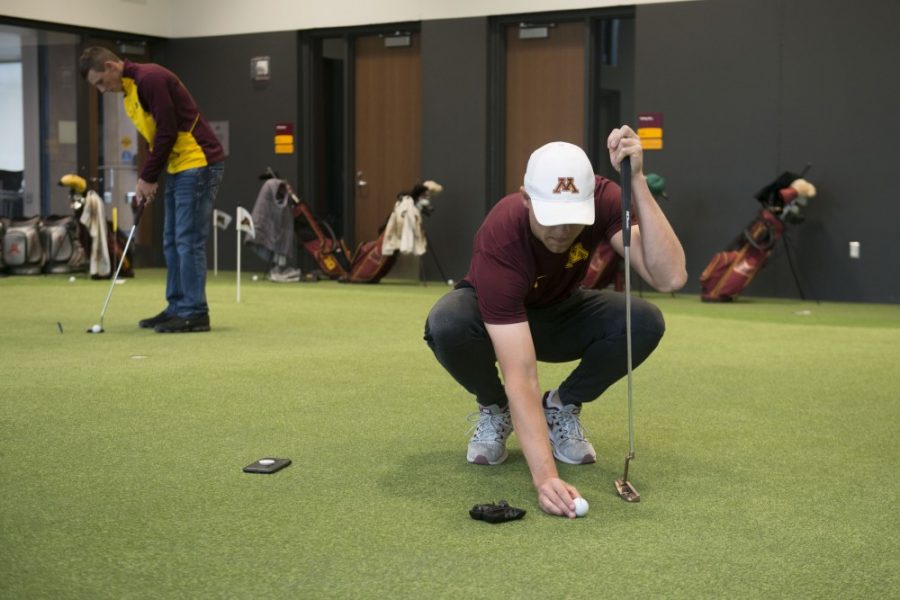 Thomas Longbella lines up a shot on the putting green in the indoor golf training facility in April 2019. The facility borders the Les Bolstad Golf Course and allows for practice throughout winter months.

The Gophers men’s golf team was the No. 2 seed going into its first tournament of the season at Hammock Beach Resort. The Gophers ended up losing to eventual champion No. 10 Indiana on Feb. 5 and tying No. 3 Purdue and No. 4 Penn State on Feb. 6.

On Feb. 5, the second round of Big Ten Match Play was a giant head-scratcher for the tournament’s top seeds, as all lost to the lower seeds, besides top-seeded Northwestern, which tied Michigan State.

The undisputed star for the Gophers on the weekend was junior Will Grevlos, who went 2-0 over his competition on Feb. 6. Grevlos was the only Gopher on any day of Big Ten Match Play to go undefeated. This was just Grevlos’ seventh time playing with the Gophers in a major tournament.

“Will’s determination and passion was at an all-time high this weekend that I haven’t seen from him before,” Gophers head coach Justin Smith said. “He’s just scratching the surface of his talent, and once he starts believing in himself and bringing his best every day, he can be the piece to our team that can put us over the hump.”

Smith also mentioned the Gophers have four golfers that are standards in their lineup and consistently produce low scores in tournaments. Those players are Angus Flanagan, Thomas Longbella, Connor Glynn and Lincoln Johnson.

If Grevlos, freshman Ben Warian, who finished 1-2 in the tournament and defeated Purdue’s Herman Sekne, or another player can fill the final fifth spot consistently and generate similar production, the sky’s the limit for the Gophers this season. Smith said it will be an extremely competitive race throughout the season.

Flanagan was not present at the tournament due to a Walker Cup commitment for team Great Britain and Ireland. Smith expects Flanagan to be with the team in every tournament moving forward.

Up next, the Gophers compete in the Spartan Collegiate at Sea Island in Sea Island, Georgia, March 8-9.