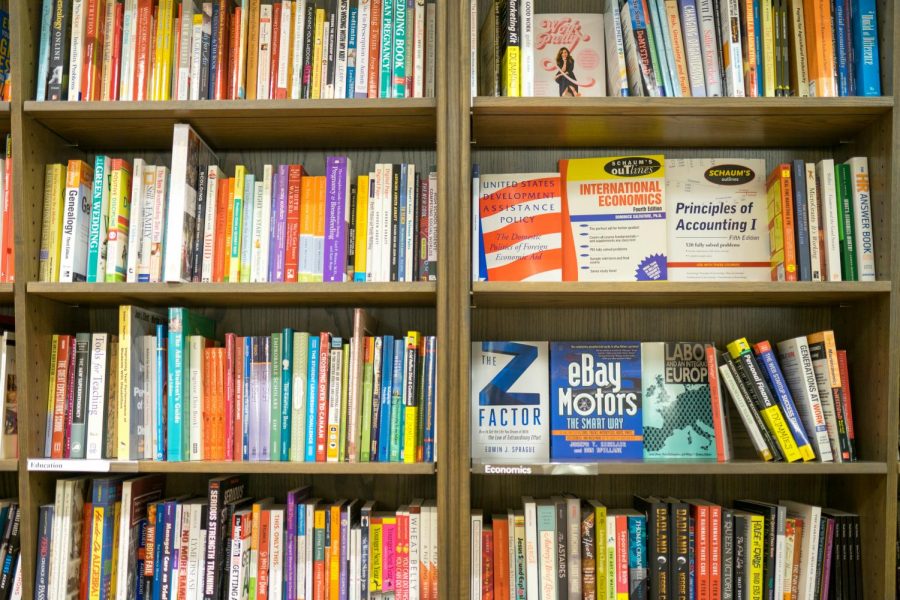 A full bookshelf in the Coffman bookstore on Wednesday, Feb.17. Some professors at the University, such as Douglas Kearney, an English professor and poet, are releasing books this spring.

As the pandemic drags on, do you find yourself craving new ways to pass the time? Are you sick of watching the same shows, reading the same books and refreshing the same social media apps over and over?

Well, you’re in luck. Several University of Minnesota professors are releasing new books sure to satiate your hunger for new content.

The first book release is “The Witch of Eye” by Kathryn Nuernberger, an assistant professor of creative writing who primarily writes poetry and creative nonfiction.

“The Witch of Eye” examines instances of defiance and resistance from people who have been accused of witchcraft throughout history, with each chapter focusing on a different accused person, Nuernberger said.

These people include healers, midwives, widows, women who owned property and anyone else who broke cultural norms.

The book also features personal essays where Nuernberger reflects on how the witch trials affect her own life and power dynamics present today.

“We’re living in a world that was in part created by the witch trials and their legacies,” Nuernberger said.

The second release is “One Summer Evening at the Falls” by Peter Campion, an associate professor of creative writing who focuses on poetry and the visual arts.

“One Summer Evening at the Falls” is a poetry collection based somewhat on Minnehaha Falls and the summers Campion spent taking walks around the Falls.

According to Campion, “The Falls” refers to two different things: First, “a kind of ordinary romantic place that people would want to go on a Friday night,” and second, “figuratively, like a fall — the fall of man, the fall from the garden,” Campion said.

The poems include a primary speaker, but some feature other voices layered on top and overheard conversations alongside translations of ancient poetry.

“One Summer Evening at the Falls” is set to release in March.

The third release is “Sensational: The Hidden History of America’s ‘Girl Stunt Reporters’” by Kim Todd, an associate professor of creative writing who writes literary nonfiction and science and environment writing.

“Sensational: The Hidden History of America’s ‘Girl Stunt Reporters’” explores the work of female investigative journalists such as Nellie Bly and their role in opening the door to more innovative journalism by women.

According to Todd, these “girl stunt reporters” went undercover to report how women were being treated at the end of the 19th century and were well paid, sometimes even better paid than their male peers.

They rarely received credit for their work, however, including paving the way for other journalists such as Upton Sinclair and Tom Wolfe, who are more broadly recognized, Todd said.

The book seeks to give these female journalists the credit they deserve.

“The smallest open door can really have huge effects,” said Todd. “Both on individual people’s lives and on a culture.”

“Sensational: The Hidden History of America’s ‘Girl Stunt Reporters’” will be released in April.

The last book release is “Sho” by Douglas Kearney, an assistant professor of creative writing who produces writing of performance, poetry and nonfiction.

“Sho” is a poetry collection about “understanding something that I’ve been grappling with and poking most of my life as a writer,” Kearney said.

The poems reflect on the intersection between violence and entertainment, specifically how violence is centered on Black people and used as a source of entertainment.

“It’s about what it feels like to be in modes of performance or asked to be things for other people without necessarily wanting to be those things,” Kearney said.

The poetry does not include Kearney’s usual performative typography or visual poems, instead, they feature only one narrator rather than several speakers.

“It’s my attempt to make a nice book of poetry,” Kearney said.

“Sho” will be released in April.