The nation’s highest-scoring offense topped its season average in a dominant showing to take down the Gophers. 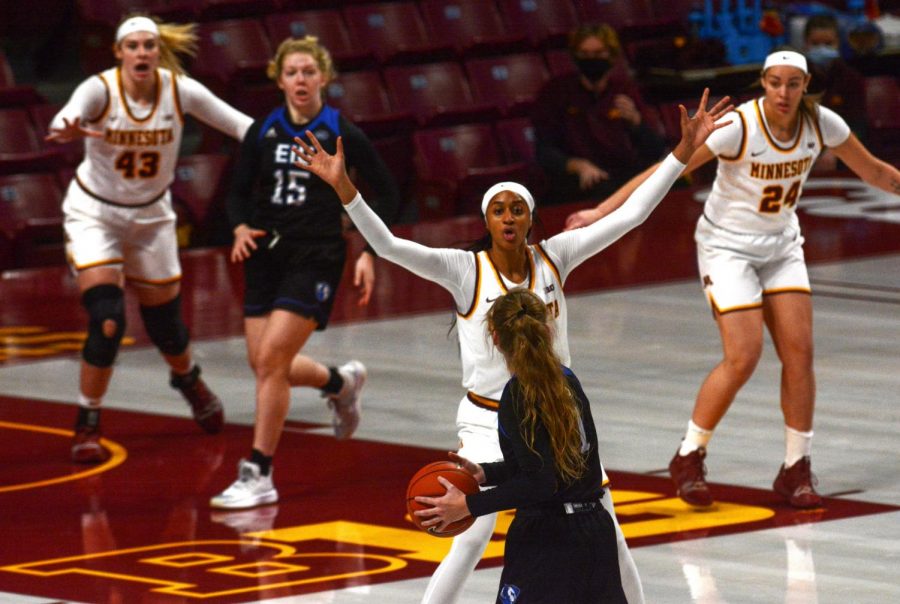 The Gophers’ women’s basketball team struggled without its two leading scorers for much of the contest, falling to No. 9 Maryland 94-62.

Minnesota’s grueling Big Ten schedule continued on Saturday in a road matchup with a top-10 Maryland team. The Terrapins have been on a tear this season, averaging a division one best 92.4 points per game en route to a 16-2 record.

The Gophers were able to hang with Maryland in an earlier contest on Jan. 14 in Williams Arena until the Big Ten’s best put on a master class from beyond the arc, leading to a 90-73 win. What makes the Terrapins so tough to defend is their balanced scoring on offense, with five players averaging double figures. Gophers’ coach Lindsay Whalen was going to need all hands on deck to lead her team to the upset.

Whalen’s starting five was missing a significant piece, as the Gophers’ leading scorer Sara Scalia — 14.9 points per game — was absent from Saturday’s game from what the school later called a “non-COVID related illness.” Gadiva Hubbard replaced Scalia in her first start since Jan. 25.

The Gophers initially looked up for the challenge, jumping out to a 5-0 lead. The Terrapins proceeded to flip a switch, outscoring Minnesota 24-6 for the rest of the first quarter. Maryland’s pressure overwhelmed the Gophers, forcing six turnovers leading to a 24-11 deficit after 10 minutes.

Maryland ballooned its lead all the way to 20 to open quarter number two, but Kadi Sissoko was able to keep the Gophers within a respectable distance. The redshirt sophomore had a team-high eight points, along with five rebounds, two assists and two blocks in the first half.

“I thought [Sissoko] played a really good game,” Whalen said. “She had some really nice energy for us.”

Things only got worse for the Gophers as Jasmine Powell went down with a left leg injury midway through the second quarter. The sophomore guard has been battling ankle problems all season, but this one looked significant. The Terrapins took advantage of shorthanded Minnesota, taking a 49-25 lead into the break.

“They have some very talented players, and they play extremely hard,” Whalen said. “You add those two things together, and they’re a very tough team. That is why they’re first in the conference.”

Minnesota had its back against the wall without its two leading scorers for the second half, as Powell found herself on the bench with ice wrapped around her left ankle.

The Terrapins did not hold back in the third quarter, extending their lead to 70-40. Heading into the final quarter, Maryland’s Ashley Owusu and Diamond Miller combined for 40 points, the same number the Gophers had as a team.

“I think they have players that can do pretty much anything on the court,” Sissoko said. “They can shoot, they drive and they can post up pretty well.”

“I thought they competed,” Whalen said. “They got to go out in a Big Ten game and show how hard they’ve been working on their games.”

The Gophers now fall to 7-11 on the season and will head back home to host Nebraska on Feb. 24 at Williams Arena.