How do you like them apples? UMN scientists create a new apple breed

'Triumph' is sweet, tangy and crisp but will not hit the shelves for the next decade. 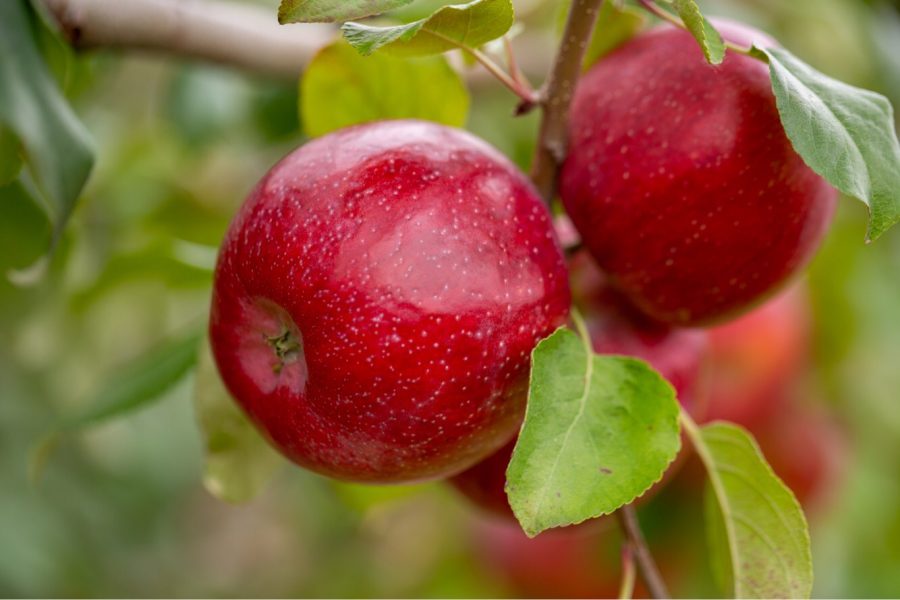 Courtesy of the University of Minnesota

"Triumph," the new breed of apples created by the University of Minnesota.

University of Minnesota apple breeder David Bedford treats the apples he breeds like his children.

It makes sense because the time it takes to cultivate the perfect apple is nearly 30 years.

Last month, the University released its newest apple — a crisp, tart, crunchy, sweet fruit called ‘Triumph’ — which not only promises a juicy bite but will provide an additional layer of fungal resistance to a common apple disease, which will reduce pesticide use for Midwest farmers.

Triumph apple trees are expected to be available in local garden centers around 2022, and customers can expect to try the apples in 2026 or 2027.

Bedford’s job at the University is to develop fruit well-adapted to the Minnesota climate. Apples commonly found at the grocery store, like Red Delicious for instance, are not bred to handle the Midwest chill. Triumph, formerly known as MN80, will be the 28th apple released by the University’s fruit breeding program.

Each spring, Bedford takes advantage of the apple trees’ short blooming season, manually collecting the pollen from one tree and bringing it to the flowers of another. He then collects the seeds from the apples made from these crossings, which will then be grown into trees at the Minnesota Landscape Arboretum Horticultural Research Center in Victoria.

Five to six years later, once those trees produce fruit, the next step is tasting. Bedford said in the apple season he will often taste 500 apples a day to determine which apples are good enough for further testing — something he promises is not as fun as it sounds.

Rarely, he said, it is love at first bite. For every apple released from the University, 10,000 are thrown away.

Naming a new apple poses its own series of challenges too, said Dr. Anne Hall, a University technology portfolio manager. The perfect name has to be fitting for the apple, easy to spell and remember and also not a registered trademark.

In September the apple breeding team sent an email to about 6,000 University employees to help name the new apple. Some of the 500 plus suggestions were related to the extraordinary events of the last year, including names like Floyd, Justice, Unity, Coronacrisp and Zoombite. Other fan favorites included Appley McAppleface, Crisp Cross and Blam-o.

The team ultimately settled on Triumph, pitched by a graduate student in the horticulture department, because it expressed a feeling of hope and optimism they felt was fitting for the new apple and for our time, Hall said in an email to the Minnesota Daily.

Bred with a national favorite developed by the University — the Honeycrisp — as well as the Liberty apple, the Triumph is unique because it was bred to have two types of natural resistance to apple scab, the most common apple disease in Minnesota.

Apple scab is a fungal disease that damages the external layer of the apple, which makes it difficult to sell. Because of this, farmers have to use chemicals to combat the fungus. Triumph’s double resistance to the disease has the potential to reduce use of these chemicals, which will not only have various health and environmental benefits but reduce costs for farmers too.

“It is the number one disease problem that we have pretty much throughout the state of Minnesota and in the northern part of the states,” said John Jacobson, an apple farmer in White Bear Lake.

In the spring, Jacobson said he spends almost six weeks just spraying for apple scab, which can cost tens of thousands of dollars per year. Growing an apple that does not need to be sprayed would save him money and allow him to use his time more efficiently around the farm.

Steve Wood, owner of Wood Orchard LLC in Sturgeon Bay, Wisconsin, said he has already ordered a thousand Triumph trees for next spring. This variety would be the first organic apples he has produced, something he said is notoriously hard to do in Minnesota because a wet climate creates the ideal conditions for apple scab.

“It’s really difficult to grow [apples] without using fungicides, so we hope that Triumph will be an apple that we have half a chance to grow organically,” Wood said.

Now, Bedford said he is happy to see Triumph finally ready to go out into the world.

“We’ll see where this kid lands up,” he said. “It’s got some good background. We’ve done the best we can.”