Rethinking I-94: How the freeway impacted Cedar-Riverside

As the state reimagines the freeway, neighbors want officials to improve walkability in the West Bank neighborhood. 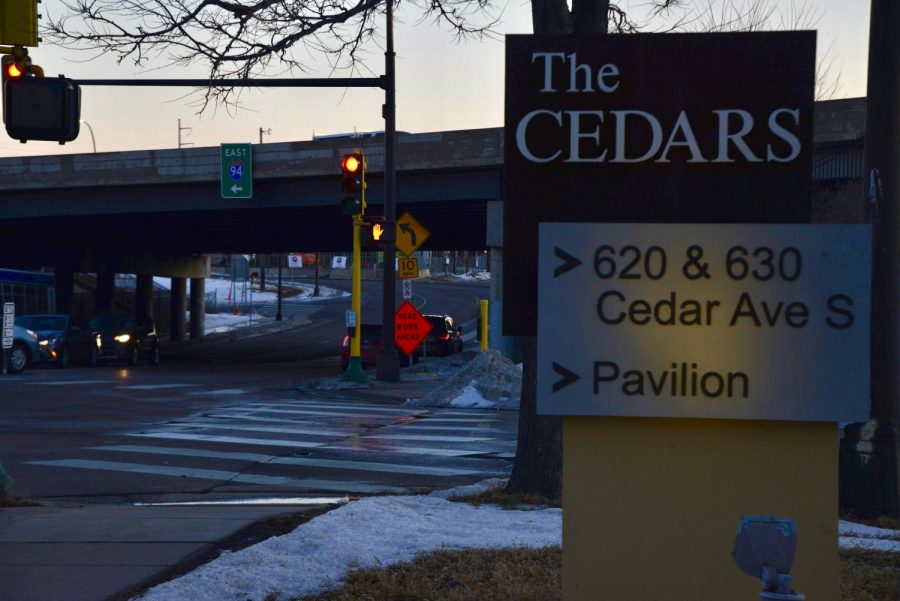 The entrance of I-94 pictured from the Cedar-Riverside neighborhood on Thursday, Feb. 25. The Minnesota Department of Transportation is currently hearing citizen concerns about the highway's impact on Cedar-Riverside communities.

Interstate 94 sliced through Cedar-Riverside in the 1960s, cutting it off from downtown Minneapolis.

Currently, the Minnesota Department of Transportation is in the public engagement process for its Rethinking I-94 initiative, which looks at a stretch of the freeway in Minneapolis and St. Paul and intends to reconnect communities torn apart by the road’s construction, including this West Bank neighborhood.

In December, Minneapolis published a resolution stating that the city opposes reconstructing the freeway in its current form and that Rethinking I-94 must avoid or mitigate “any negative impacts to livability, safety or environmental burden to adjacent and connecting neighborhoods.” The resolution fits within the Minneapolis 2040 Comprehensive Plan’s goals to reduce greenhouse gas emissions, prioritize alternate transit and improve racial equity.

In Cedar-Riverside, residents said they wanted Minneapolis transportation authorities to increase walkability and not increase traffic on the freeways and within the busy neighborhood streets.

Longtime neighbor and project manager for the city of St. Paul Kowsar Mohamed said the traffic congestion is dangerous for the children and elderly population that live and walk nearby. She said it’s important for city authorities to keep these dangers in mind when planning construction detours.

“It is highly recommended that we raise awareness at any given point if there is going to be construction,” Mohamed said. “That the detours aren’t pushed over here because there is already a high amount of cars that come through our neighborhood intersections on Fourth Street, on Cedar [and] Riverside.”

The resolution emphasizes increasing alternative transportation, like rapid transit and bicycle connections over the freeway.

Mohamed said she wants city authorities to engage more with community members and consider implications for Cedar-Riverside while developing the Rethinking I-94 initiative.

“This is a highly knowledgeable and aware community of their surroundings,” Mohamed said. “They know what their needs are, obviously walkability … having increased opportunities for economic development and prosperity and social capital is always at the forefront of any emerging community.”

A vision for Cedar-Riverside

The freeway system decimated neighborhoods across the country. In St. Paul, the construction of I-94 tore apart the historically Black Rondo neighborhood, home to a flourishing and vibrant Black middle-class. In all, at least 700 homes and 300 businesses were demolished.
But in Cedar-Riverside, community leader Abdirizak Bihi said the freeway provided transportation and job opportunities for residents.

“As the current condition of the community, this immigrant community that depends on highways to get jobs that are not in the city or to travel on public transportation, it’s really useful,” Bihi said.

Bihi added that many of his neighbors had jobs in suburbs or transit-related jobs like driving for Uber or Lyft, so the easy commute is essential.

However, Mohamed said she wants the city to install more pedestrian bridges and make sidewalks safer.

Currently, there is one pedestrian bridge that connects to the Seward neighborhood, and when it is under construction, she said it’s more difficult for residents to leave the neighborhood.

But Cedar-Riverside and Seward once were deeply connected before they evolved into separate communities after freeway construction, said David Markle, who has lived in the neighborhood since the early ‘60s.

On the West Bank, I-94 sliced through homes, a church, locally-owned businesses and Augsburg University, Markle said. An influx of renters also moved to the area.

A community “created in the shadow of the freeways”

When officials determined where the freeway would run, they considered the highway a tool to clear “blight” or “slums” in the city, which was subject to interpretation, said Greg Donofrio, director of A Public History of 35W and University of Minnesota professor.

In the ‘60s, when the interstate was constructed, Cedar-Riverside hosted high populations of Scandanavian and Irish immigrants, according to a Twin Cities Daily Planet article. It was also a hub for the counterculture — hippies, and beatniks.

Two developers, Martin and Gloria Segal, bought up many smaller pieces of land with the end goal of a “New Town in Town” concept that would create a community within a community. They wanted to redevelop most of the neighborhood into high-rise apartment buildings with a wide variety of income types.

“The Scandanavian and Eastern European populations were growing older, and Cedar Avenue was becoming a part of the underbelly of the city’s nightlife,” said Tim Mungavan, director of the West Bank Community Development Corporation. “And so the idea was to just make a clean slate and get rid of everything.”

Ralph Rapson, a notable architect associated with the University, helped the Segals design Riverside Plaza apartment complex as the first phase of this plan. For the developers, making a clean slate included clearing the existing immigrant population in the neighborhood, Mungavan said.

“[The developers] bought a property and basically would rent that property to hippie households as kind of a blockbusting technique,” Mungavan said. “The older Scandinavians who were not that interested in moving, when they ended up with a neighbor that had this totally different and objectionable lifestyle, that sort of softened them up and helped [the developers] buy their property.”

However, the “hippie population” organized against the development in the early ‘70s, and the “utopian” intent for the neighborhood crumbled as the developers halted progress, Mungavan said.

By the ‘70s, a new wave of Vietnamese immigrants moved into Riverside Plaza, followed by East African immigrants in the ‘90s to shape the ethnically diverse neighborhood that it is today.

“So that existing community has been sort of created in the shadow of those freeways,” Mungavan said. “And it’s pretty much adapted to it.”